​Corey Perry reaches a goal milestone in the Lightning’s win over the Oilers, the Avalanche extends their lead atop the overall standings, the Leafs place Jake Muzzin on LTIR, and more in today’s NHL morning coffee headlines.

NHL.COM: Corey Perry tallied his 400th career goal as he helped the Tampa Bay Lightning hold off the Edmonton Oilers 5-3. The Lightning surged to a 4-1 lead and sealed the win with Nikita Kucherov’s empty-netter after the Oilers rallied to within one goal. Perry, Kucherov and Pat Maroon each finished the night with a goal and an assist. Oilers captain Connor McDavid scored twice and teammate Leon Draisaitl collected three assists as both are tied for the points lead with 73. With 72 points, the Lightning sits three back of the Atlantic Division-leading Florida Panthers. The loss dropped the Oilers (59 points) into the second Western Conference wild-card berth. 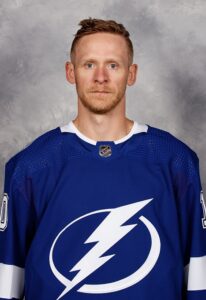 SPECTOR’S NOTE: The loss has some pundits wondering what Oilers general manager Ken Holland will do to address his club’s leaky goaltending. It’s been a problem all season, renewing speculation over whether Holland will make a move to address this issue before the March 21 trade deadline.

The Colorado Avalanche (78 points) opened a three-point lead over the Panthers for first place in the overall standings with a 5-2 victory over the Detroit Red Wings. Pavel Francouz made 32 saves for the win while Gabriel Landeskog scored two goals and Cale Makar picked up two assists. Red Wings captain Dylan Larkin and defenseman Moritz Seider each collected two assists. Avs center Nathan MacKinnon missed this contest with a lower-body injury but is expected to play against the Winnipeg Jets on Friday.

Los Angeles Kings winger Viktor Arvidsson tallied two goals (including the game-winner) as his club nipped the Arizona Coyotes 3-2. The win vaults the Kings (61 points) over the Oilers into third place in the Pacific Division.

An overtime goal by Tyler Seguin lifted the Dallas Stars to a 3-2 win over the Winnipeg Jets. Seguin finished the night with two points while teammate Jamie Benn had a goal and two assists. Jets goaltender Connor Hellebuyck turned aside 36 shots. The Stars (58 points) are one point behind the Oilers and Anaheim Ducks while the Jets (53 points) are six points out of that final Western wild-card berth.

Montreal Canadiens goaltender Sam Montembeault kicked out 32 shots for his first NHL shutout to blank the Buffalo Sabres 4-0. Nick Suzuki scored twice and collected an assist while Cole Caufield had a goal and an assist. Canadiens forwards Josh Anderson (head injury) and Paul Byron (upper-body injury) left the game and will be re-evaluated later today. The Habs have won four straight.

SPECTOR’S NOTE: Caufield remains on a torrid scoring pace under the tutelage of interim coach Martin St. Louis. The rookie winger has six goals and 10 points in his last seven games.

TORONTO SUN: The Maple Leafs placed defenseman Jake Muzzin on long-term injury reserve as he recovers from a head injury (concussion) suffered during Monday’s 5-2 loss to the Canadiens. He’ll be sidelined for at least 10 games and 24 days. The move would allow the Leafs to exceed the salary cap by roughly the equivalent of Muzzin’s $5.625 million annual cap hit if they choose to add a player or two before the March 21 trade deadline.

SPECTOR’S NOTE: Bear in mind the Leafs would have to become cap compliant if they use that LTIR space to acquire a player should Muzzin return to action before the end of the season. It’ll be interesting to see how general manager Kyle Dubas addresses this situation.

The Leafs also announced yesterday prospect forward Rodion Amirov has a brain tumor. The 20-year-old is receiving treatment and remains upbeat that he’ll overcome this condition and resume his playing career.

SPECTOR’S NOTE: Best wishes to Amirov for a swift and complete recovery.

TSN: The Montreal Canadiens will provide a medical update on Friday on the condition of Carey Price. The 34-year-old goaltender has been recovering from off-season knee surgery. He also spent the first month of this season in the NHL/NHLPA player assistance program for substance abuse and mental health reasons.

SPECTOR’S NOTE: Price’s on-ice workouts stopped on Feb. 15 but he’s continuing off-ice workouts. It remains to be seen if he’ll return at all this season. At this stage, it might be best if he puts his focus on working toward returning next season.

MONTREAL GAZETTE: Speaking of the Canadiens, they promoted John Sedgwick to assistant general manager. He’d been their vice-president of hockey operations and legal affairs since 2017.

ABC 6: Columbus Blue Jackets goaltender Joonas Korpisalo has been placed on injured reserve retroactive to Feb. 15 with a lower-body injury. NHL.com reports Jackets netminder Daniil Tarasov’s season is over after undergoing surgery on his right hip. His recovery period is six months.

SAN JOSE HOCKEY NOW: Sharks president Jonathan Becher declared it’s “highly unlikely” his club will undergo a “proactive rebuild” of its roster. He felt it would be difficult selling season tickets for the next three to five years if the club wasn’t going to be very good over that period.

SPECTOR’S NOTE: What also hurts season ticket sales is a club in need of a rebuild refusing to do so and icing a product that fails to improve. If you do a rebuild correctly you can sell your fans on hope for the future. Of course, there could be other factors at play here. The pandemic hit all teams hard, some more than others. Perhaps the Sharks could have a more pressing need for revenue compared to other clubs.