NHL.COM: The Minnesota Wild overcame blowing a four-goal lead to defeat the Dallas Stars 6-5 on a shootout goal by Frederick Gaudreau. Kirill Kaprizov scored in regulation to extend his points streak to 12 games as the Wild improve their record to 13-9-2. Dallas winger Jason Robertson had two points to extend his streak to 18 games while Roope Hintz tallied a hat trick and Joe Pavelski added three assists. The Stars are 14-6-5 on the season. 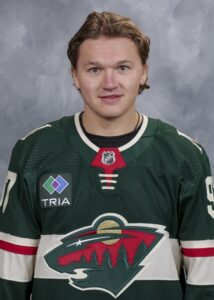 The Winnipeg Jets scored five unanswered goals to defeat the Anaheim Ducks 5-2. Saku Maenalanen and Nate Schmidt each had a goal and an assist while Connor Hellebucyk made 28 saves for the Jets (15-7-1) while the last overall Ducks drop to 6-17-3.

New York Islanders goaltender Semyon Varlamov stopped 21 shots to shut out the Chicago Blackhawks 3-0. Matt Martin, Zach Parise and Brock Nelson tallied for the 16-10-0 Islanders while the Blackhawks fall to 7-13-4.

SPECTOR’S NOTE: Earlier in the day, the Blackhawks announced that goaltender Petr Mrazek will be sidelined for at least a week with a groin injury.

Buffalo Sabres forward Jack Quinn scored twice while teammate Tage Thompson had a goal and an assist and Dylan Cozens collected three helpers in a 6-3 victory over the San Jose Sharks. The Sabres improve to 11-13-1 while the Sharks (8-16-4) have lost six of their last seven contests.

SPECTOR’S NOTE: Thompson’s been drawing considerable attention for his scoring feats but Cozens has also been garnering notice for his production this season. Now in his third NHL campaign, the 21-year-old center’s 24 points in 25 games have him on a path to far exceed last season’s 38 points.

THE COLUMBUS DISPATCH: Johnny Gaudreau is still producing well despite the high number of injuries depleting the Blue Jackets’ lineup this season. He’s on pace for franchise records in assists (63) and points (93) over a full 82 games. The 29-year-old left winger has drawn praise from Jackets coach Brad Larsen for his production and poise.

SPECTOR’S NOTE: It’s been a disappointing season thus far for the injury-ravaged Blue Jackets but Gaudreau has been among their few bright spots. His production would undoubtedly be higher if he had healthier, consistent linemates. He continues to prove himself as an elite offensive player.

VEGAS HOCKEY NOW: The Golden Knights will be without defenseman Alex Pietrangelo when they face off tonight against the Boston Bruins. It’s the fourth straight game he’s missed due to personal reasons. Meanwhile, Jack Eichel will be a game-day decision as he’s nursing an apparent leg injury suffered during the Golden Knight’s 4-1 win over the Detroit Red Wings.

CHICAGO SUN-TIMES: Blackhawks forward Andreas Athanasiou was angered at Jacob Trouba after the New York Rangers defenseman laid him out with a high hit on Saturday. Athanasiou was unhurt on the play but accused Trouba of deliberately attempting to injure opponents.

“That’s his game; that’s what he does,” said Athanasiou. “He’s an $8 million man with zero goals, so he has to figure out how to do something when making that much. If you can’t help the team, I guess you try to hurt guys on the other team.”

SPECTOR’S NOTE: Trouba does have a reputation for high hits, with the most notable examples being those he laid out on Colorado’s Nathan MacKinnon and Pittsburgh’s Sidney Crosby last season. The Rangers’ captain has only been suspended and fined once in his career and that was back in 2017 when he was with the Winnipeg Jets.

EDMONTON JOURNAL: Former Oilers head scout Barry Fraser passed on Sunday at age 82. He was the architect of the Oilers dynasty of the 1980s as his scouting led to the club selecting such notables as Kevin Lowe, Mark Messier, Glenn Anderson, Paul Coffey, Jari Kurri and Grant Fuhr.

← Sunday NHL Rumor Roundup - December 4, 2022 NHL Rumor Mill - December 5, 2022 →
We use cookies on our website to give you the most relevant experience by remembering your preferences and repeat visits. By clicking “Accept”, you consent to the use of ALL the cookies.
Do not sell my personal information.
Cookie SettingsAccept
Manage consent