​Walter Gretzky, the father of Wayne Gretzky, passed away at 82, the Flames replace head coach Geoff Ward with Darryl Sutter, plus recaps of Thursday’s games and more in today’s NHL morning coffee headlines. 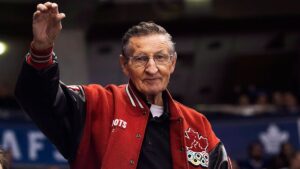 “For my sister and my 3 brothers, Dad was our team captain – he guided, protected, and led our family every day, every step of the way,” wrote Wayne on Twitter in announcing Walter’s passing.

SPECTOR’S NOTE: My condolences to the Gretzky family and Walter’s friends. He will be greatly missed. A kind, friendly man who devoted considerable time to charitable causes and always had time for a fan, Walter’s passing leaves a void in the hockey world.

“There’s no relationship like a father and son.” – Wayne Gretzky

As long as there is hockey, Walter’s story will be told. Stephen Brunt remembers Canada’s favourite hockey dad. pic.twitter.com/fhkv1YemyV

The Calgary Flames’ 7-3 drubbing of the Ottawa Senators was overshadowed by their firing of head coach Geoff Ward following the game. His replacement is Darryl Sutter, who coached the Flames from 2002 to 2006 and was also their general manager from 2003 to 2010. TSN’s Pierre LeBrun reports the Flames signed Sutter to a three-year contract (this season plus two more).

Flames winger Dillon Dube tallied his first career NHL hat trick while Matthew Tkachuk collected three assists. Sam Bennett was made a healthy scratch from this contest as a “coach’s decision” by Ward.

SPECTOR’S NOTE: Ward became the Flames’ interim head coach in November 2019 and was named their full-time head coach last September. The club’s inconsistency this season has threatened to derail their playoff hopes. It’ll be interesting to see how they perform under Sutter, a no-nonsense coach who guided the Flames to the 2004 Stanley Cup Final and went on to win two Cups with the Los Angeles Kings in 2012 and 2014.

The New York Islanders extended their home record to 8-0-2 by dropping the Buffalo Sabres 5-2. Matt Martin scored twice and Jordan Eberle had a goal and an assist. Sabres winger Taylor Hall tallied his first goal since the club’s season-opener on Jan. 14.

Chris Kreider tallied a hat trick to lead the New York Rangers over the New Jersey Devils 6-1. It was a costly win for the Rangers as goaltender Igor Shesterkin left the game in the third period with a lower-body injury. Struggling Blueshirts center Mika Zibanejad had his ice time reduced, including being bench for the first half of the second period. Earlier in the day, the Devils announced captain Nico Hischier is week-to-week with a sinus fracture after being hit in the face by the puck during Saturday’s loss to Washington.

Carolina Hurricanes winger Andrei Svechnikov finally faced off against brother Evgeny Svechnikov in a 5-2 win over the Detroit Red Wings. Andrei had a goal and an assist while Evgeny picked up an assist for the Red Wings. Hurricanes defenseman Brett Pesce was fined $5,000.00 by the NHL department of player discipline for a dangerous slew foot on Wings forward Robby Fabbri.

The Philadelphia Flyers overcame a 3-0 deficit to edge the Pittsburgh Penguins 4-3. Claude Giroux scored twice, including the game-winner. Flyers forward Joel Farabee missed the game as he was placed on the NHL’s COVID-19 protocol list. Penguin captain Sidney Crosby came off the list yesterday and picked up an assist.

Paul Stastny scored twice and Pierre-Luc Dubois tallied in overtime as the Winnipeg Jets nipped the Montreal Canadiens 4-3. Corey Perry had a goal and an assist for the Canadiens, who’ve dropped six games in overtime this season and are 3-5-4 in their last 12 games. They hold a two-point over the Flames for the fourth and final playoff spot in the Scotia North Division.

SPECTOR’S NOTE: A tough loss for the Blackhawks as they outplayed the Lightning through the first two periods and carried a 2-0 lead into the third.

The Columbus Blue Jackets defeated the Dallas Stars 3-2, handing the latter their fourth straight loss. Boone Jenner had a goal and an assist for the Jackets.

A two-goal performance by Jake Virtanen lifted the Vancouver Canucks to a 3-1 upset of the league-leading Toronto Maple Leafs. Canucks center Elias Pettersson missed the game with an upper-body injury and is listed as day-to-day.

THE ORANGE COUNTY REGISTER: Anaheim Ducks defenseman Hampus Lindholm will be sidelined for six weeks with a fractured wrist.

THE MERCURY NEWS: San Jose Sharks forward Joachim Blichfeld received a two-game suspension by the league for an illegal hit to the head of Colorado Avalanche center Nathan MacKinnon on Wednesday. MacKinnon’s status remains uncertain as the Avs have yet to release an update on his condition.

← Wild's Kirill Kaprizov Emerges as Calder Trophy Front-Runner NHL Rumor Mill - March 5, 2021 →
We use cookies on our website to give you the most relevant experience by remembering your preferences and repeat visits. By clicking “Accept”, you consent to the use of ALL the cookies.
Do not sell my personal information.
Cookie SettingsAccept
Manage consent