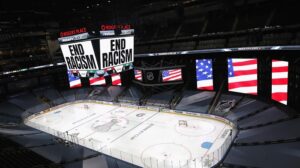 Hurricanes push Islanders to the brink of elimination while the Stars tie their series with the Blues. Details and more in today’s NHL morning coffee headlines.

NHL.COM: The Carolina Hurricanes have the New York Islanders on the brink of elimination following a 5-2 victory in Game 3 of their second-round series. They hold a 3-0 lead and can finish the series with a win in Game 4 on Friday. SPECTOR’S NOTE: It was a close game up until Williams’ goal, after which the Hurricanes bottled up the Islanders for the rest of the third. The Isles managed to score twice but it still wasn’t enough to beat the plucky Canes. They’ve done a fine job cashing in on their opportunities in this series.

This game was a chippy affair.  Blues winger David Perron whacked Bishop in the back and Blues netminder Jordan Binnington chopped at Bishop and took a swing at Stars captain Jamie Benn following the second period.

SPECTOR’S NOTE: The Blues frustration likely stemmed from the Stars dominating the play, especially in the second period. It’ll be interesting to see if the rough stuff in this game spilled over into Game 5.

BOSTON HERALD: Center David Backes could return to the Bruins line for Game 4 tonight against the Columbus Blue Jackets. The Jackets hold a 2-1 series lead.

MONTREAL GAZETTE: Canadiens forward Jonathan Drouin underwent minor surgery to repair a fractured nose. Drouin suffered the injury earlier in the season but played through it before seeking surgery.

WGR 550: The Buffalo Sabres interviewed Dave Tippett for their head coaching position. Tippett is the former coach of the Dallas Stars and Arizona Coyotes.

THE SCORE: NHL commissioner Gary Bettman told a Canadian parliament subcommittee on sports-related concussions he feels outlawing hits to the head would lead to the decline of bodychecking in the game. His reasoning is larger players would be penalized for inadvertent headshots on smaller players. He also reiterated his long-held belief that there’s insufficient evidence to link hockey concussions to the brain condition CTE.

SPECTOR’S NOTE: The National Football League, meanwhile, banned helmet hits to the head and it didn’t adversely affect their game. After much stonewalling, the NFL also acknowledged the link between CTE and playing football in 2016.

SPORTSNET: Vancouver hockey writer and broadcaster Jason Botchford has passed away from heart failure at age 48.

SPECTOR’S NOTE: My condolences to Botchford’s family, friends, and colleagues. I didn’t know him but followed his work over the years and found him an insightful, thought-provoking hockey reporter. I may not have always agreed with him but I certainly respected his work.