The Jets will honor Teemu Selanne and Teppo Numminen, what the Capitals can expect from Dylan Strome, and more in today’s NHL Morning Coffee Headlines.

WINNIPEG SUN: Teemu Selanne and Teppo Numminen have become the latest members of the Winnipeg Jets Hall of Fame. The duo will be honored in a banner-raising ceremony on Nov. 17 prior to their game against the Anaheim Ducks. 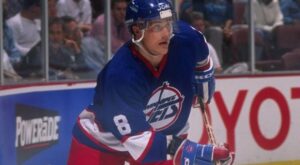 SPECTOR’S NOTE: Selanne and Numminen were the last stars (along with Keith Tkachuk) on the previous version of the Jets before the franchise was relocated in 1996 to Arizona. Both players began their NHL careers in Winnipeg, with Selanne playing four seasons and Numminen eight.

Selanne was inducted into the Hockey Hall of Fame in 2017. Numminen’s No. 27 was enshrined into the Arizona Coyotes ring of honor for his 15 seasons with the franchise, including their incarnation as the Jets.

WASHINGTON HOCKEY NOW: Having signed a one-year contract with the Capitals, Dylan Strome must now prove he can become a reliable, regular top-six center. He’ll be expected to replace the sidelined Nicklas Backstrom on the Capitals’ second line until the latter returns from hip surgery later this season.

Strome, 25, could be playing alongside T.J. Oshie and Anthony Mantha. He’ll have an additional incentive as he’ll be a restricted free agent with arbitration rights next summer.

SPECTOR’S NOTE: Injuries and inconsistency dogged Strome during his tenure with the Chicago Blackhawks. He was also shuffled around their lineup over the past two seasons but still finished with 48 points in 69 games in 2021-22. A solid performance this season could ensure he gets a longer contract with the Capitals.

GOPHNX.COM: Nick Bjugstad signed with the Arizona Coyotes hoping to resuscitate his career. The 30-year forward wants to prove that he can still play meaningful minutes after years of injuries. He also hopes his experience and leadership can help the younger players on the Coyotes.

SPECTOR’S NOTE: A solid effort by Bjugstad in the coming season could also draw interest from playoff contenders seeking depth at the 2023 trade deadline.

COLORADO HOCKEY NOW: The Avalanche re-signed forward Shane Bowers to a one-year, two-way contract worth $750k at the NHL level.

PHILLY.COM: The Flyers recently signed forward Jackson Cates to a one-year, two-way deal worth $775K at the NHL level.