LAS VEGAS SUN: The Vegas Golden Knights fired head coach Pete DeBoer on Monday after less than three seasons in the role. The decision comes after the club failed to qualify for the playoffs for the first time in franchise history. 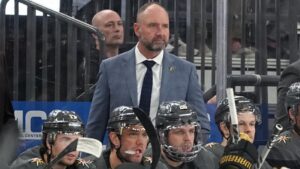 SPECTOR’S NOTE: Critics suggest DeBoer was made the fall guy for the club’s inability to clinch a postseason berth. He had a number of his core players sidelined by injuries this season as well as management’s inability to suitably address that problem because of limited salary-cap space. The club’s messy split with goaltender Marc-Andre Fleury last summer was also a factor, as was the cost of acquiring Jack Eichel and his late addition to the lineup due to his recovery from neck surgery.

Speculation has already started over DeBoer’s potential replacement. Former NHL coaches such as Barry Trotz, Paul Maurice and Joel Quenneville have been mentioned, though the latter would require the approval of league commissioner Gary Bettman due to his role in the Kyle Beach scandal.

BOSTON HOCKEY NOW: Bruins captain Patrice Bergeron shot down rumors he could sign with the Montreal Canadiens as a free agent in July. He indicated he’ll either re-sign with the Bruins or retire.

SPECTOR’S NOTE: That rumor was fueled in part by NBC Sports Boston analyst Tony Amonte claiming Bergeron grew up as a Canadiens fan, as well as pointing out his former agent was now the Habs general manager. In fact, Bergeron grew up as a Nordiques fan plus the Canadiens’ limited cap space would’ve made it almost impossible to sign him even if they wanted to.

I believe the Bruins will bring back Bergeron for at least another season. The 36-year-old remains among the NHL’s elite two-way centers and his departure would leave the Bruins quite thin at that position.

TORONTO SUN: Maple Leafs star Mitch Marner was the victim of a carjacking at gunpoint in Etobicoke on Monday evening. Three suspects armed with two handguns and a knife robbed Marner of his black Range Rover at the Cineplex Theatre on The Queensway.

SPECTOR’S NOTE: Marner and his friend were shaken up but unhurt in the incident and didn’t have guns pointed at them. The suspects apparently didn’t know who he was and were only interested in the vehicle.

TSN: The New York Islanders announced Lane Lambert has been named their new head coach. He served as an associate coach under former bench boss Barry Trotz for the past four seasons.

SPORTSNET: Golden Knights captain Mark Stone will likely undergo back surgery on Wednesday. He’s expected to be available for the start of training camp in September.

TWINCITIES.COM: Minnesota Wild defenseman Matt Dumba confirmed the upper-body injury that sidelined him for 12 games in April was a punctured lung and a dislocated rib. He returned for their first-round series against the St. Louis Blues but admitted being less than 100 percent in that series. The Wild were eliminated by the Blues in six games.

THE ATHLETIC: Los Angeles Kings winger Viktor Arvidsson will undergo surgery on Tuesday to repair a herniated disc. The injury kept him out of the Kings’ series with the Edmonton Oilers. They were eliminated by the Oilers in seven games.

BOSTON HOCKEY NOW: Bruins defenseman Matt Grzelcyk will undergo surgery for an injured right shoulder that nagged him most of this season.

OTTAWA SUN: Senators forward Tim Stuetzle suffered an injured left leg playing for Germany against France during a World Championships game on Monday. He left the game and there’s no word yet as to the severity of the injury.

← NHL Rumor Mill - May 16, 2022 NHL Rumor Mill - May 17, 2022 →
We use cookies on our website to give you the most relevant experience by remembering your preferences and repeat visits. By clicking “Accept”, you consent to the use of ALL the cookies.
Do not sell my personal information.
Cookie SettingsAccept
Manage consent