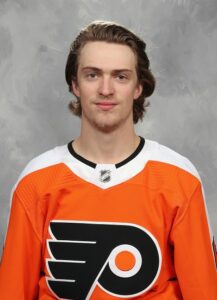 SPECTOR’S NOTE: It was another quiet offseason for arbitrators. All of the 19 players scheduled for hearings wound up settling with their respective clubs.

Cap Friendly indicates the Flyers have just over $281K in remaining cap space. They could shed some salary to create some additional wiggle room for the coming season.

THE TENNESSEAN: With a new contract signed, Nashville Predators goaltender Juuse Saros is training in Helsinki with several other Finnish NHL players in preparation for the 2021-22 season. Saros inked a four-year, $20 million deal earlier this month.

LAS VEGAS REVIEW-JOURNAL: The Chicago Blackhawks created a minor buzz on Twitter with a photo of the jerseys of their offseason acquisition with Marc-Andre Fleury’s last name misspelled. The tweet was later removed and replaced with one showing his name spelled correctly. Fleury was acquired by the Blackhawks last month from the Vegas Golden Knights.

THE SEATTLE TIMES: Seattle Kraken prospect Matty Beniers is returning to the University of Michigan for the coming season. Beniers was the second-overall pick in this year’s draft.

SPECTOR’S NOTE: Owen Power (first overall, Buffalo Sabres) and Kent Johnson (fifth overall, Columbus Blue Jackets) are also returning to the University of Michigan for the coming season. The trio is keen to win the national championship before moving on to their NHL careers.

← NHL Rumor Mill - August 21, 2021 Sunday NHL Rumor Roundup - August 22, 2021 →
We use cookies on our website to give you the most relevant experience by remembering your preferences and repeat visits. By clicking “Accept”, you consent to the use of ALL the cookies.
Do not sell my personal information.
Cookie SettingsAccept
Manage consent