A look at some of the notable off-season issues facing the Canucks and Flyers in today’s NHL rumor mill.

THE ATHLETIC: Thomas Drance took note of Vancouver Canucks hockey operations president Jim Rutherford’s willingness to play contract hardball with popular head coach Bruce Boudreau. Rutherford told a season-ending press conference yesterday that the team would like to bring the bench boss back on his current contract rather than on an extension. Boudreau’s current deal has an option for next season which he can opt out of by June 1. 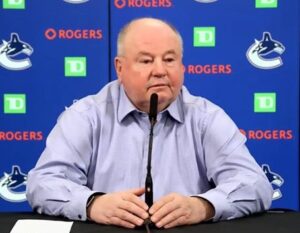 Drance suggested it was a risky move by Rutherford. He pointed out Boudreau’s coaching stock is sky-high right now following the fine work he did in reverse the Canucks’ sinking fortunes when he took over from Travis Green last December. The Flyers and Vegas Golden Knights are two possible destinations if Boudreau decides to leave.

SPECTOR’S NOTE: As I pointed out in this morning’s headlines update, Rutherford’s decision gives the impression he’d prefer to bring in a coach of his own choice. He inherited Boudreau, who was hired three days prior.

Rutherford said the Canucks want to bring Boudreau back and the latter has indicated he’d like to stay in Vancouver. It’ll be interesting to see how this shakes out. It’s now up to Boudreau.

Meanwhile, Drance’s colleague Rick Dhaliwal tweeted that J.T. Miller’s agent Brian Bartlett said his client has made re-signing with Vancouver one of his goals. He wants to help the club go forward and would be happy to sign a contract extension this summer.

SPECTOR’S NOTE: Miller’s been the subject of considerable trade speculation this season. He’s a year away from UFA status and coming off a career-best 99-point season.

Miller is in line for a substantial raise over his $5.25 million annual cap hit. Whether a suitable agreement can be found with a Canucks management looking to bring in younger and affordable talent should ensure the 29-year-old center remains a fixture in the NHL rumor mill.

THE ATHLETIC: Charlie O’Connor reports Philadelphia Flyers general manager Chuck Fletcher is hoping to replicate his 2019 offseason success this summer. Back then, Fletcher hired Alain Vigneault as head coach, acquired and signed center Kevin Hayes, swapped Radko Gudas for Matt Niskanen and acquired Justin Braun to bolster the blueline. He also traded down in the first round of the 2019 draft to select Cam York and used an extra second-round pick to select promising Bobby Brink.

SPECTOR’S NOTE: O’Connor also speculates that Fletcher will look toward a healthy Ryan Ellis and Sean Couturier and the improvement of key players between 23 and 26 already on the roster. He’ll also look to the incoming prospects (like Brink) to further improve their depth.

One big problem for Fletcher is the Flyers’ limited cap space for 2022-23. O’Connor pointed out they have about $8.9 million to address their roster issues. He anticipates that will shrink to $5 million once they re-sign restricted free agents like Owen Tippett, Morgan Frost and Zack MacEwen.

That’s prompted recent speculation suggesting defenseman Ivan Provorov ($6.75 million through 2024-25) or winger Travis Konecny ($5.5 million) could become trade bait. One of them could be swapped for a player with a comparable salary or shed in a cost-cutting deal to free up cap space to pursue free-agent talent.

Whatever Fletcher does this summer, he has to avoid repeating his miscues of the last two offseasons. His moves must at least turn the Flyers back into playoff contenders again. Otherwise, he could find himself unemployed by this time next year.

← NHL Morning Coffee Headlines - May 4, 2022 NHL Morning Coffee Headlines - May 5, 2022 →
We use cookies on our website to give you the most relevant experience by remembering your preferences and repeat visits. By clicking “Accept”, you consent to the use of ALL the cookies.
Do not sell my personal information.
Cookie SettingsAccept
Manage consent