NHL.COM: Carolina Hurricanes defenseman Tony DeAngelo scored and set up two others in a 6-3 victory over the New York Rangers. It was DeAngelo’s first game against his former club. Sebastian Aho also had a goal and two assists for the Hurricanes (56), who move ahead of the Rangers into first place in the Metropolitan Division with four games in hand. Mika Zibanejad and Chris Kreider each had a goal and an assist for the Blueshirts.

Sidney Crosby tallied a hat trick and picked up an assist to lead the Pittsburgh Penguins over the Columbus Blue Jackets 5-2. Brian Dumoulin scored and picked up two assists for the Penguins, who’ve won four straight and 15 of their last 17 games. With 55 points, they’re one back of the Hurricanes and Rangers in the Metropolitan.

Shootout goals by Anton Lundell and Aleksander Barkov carried the Florida Panthers to a 2-1 victory over the Vancouver Canucks. Spencer Knight made 27 saves for the Panthers in regulation and overtime while Spencer Martin kicked out 33 shots for the Canucks in his first NHL game since Feb. 1, 2017. With the win, the Panthers (61 points) opened a two-point lead over the Tampa Bay Lightning for first place in the overall standings.

Speaking of the Lightning, they dropped a 5-1 decision to the Anaheim Ducks, who snapped a four-game losing skid. John Gibson turned aside 32 shots for the win while teammate Derek Grant tallied two goals. The Ducks (47 points) moved two points ahead of the Los Angeles Kings for second place in the Pacific Division.

St. Louis Blues goaltender Ville Husso stopped 27 shots to shut out the Seattle Kraken 5-0. Brandon Saad collected two assists for the Blues as they moved into second place in the Central Division with 53 points. Colton Parayko became the first defenseman in Blues history to score on a penalty shot.

The Minnesota Wild got two goals from Ryan Hartman in a 5-1 victory over the Chicago Blackhawks. Kaapo Kahkonen picked up the win with 35 saves while Blackhawks netminder Marc-Andre Fleury was pulled after giving up four goals on 13 shots. With 49 points, the Wild hold a five-point lead over the San Jose Sharks for the first wild-card spot in the Western Conference.

An overtime goal by Roope Hintz lifted the Dallas Stars over the Detroit Red Wings 5-4. Hintz, Jason Robertson and Esa Lindell each had a goal and an assist as the Stars (42 points) moved within two points of the Sharks for the final Western Conference wild-card berth.

Brock Nelson scored twice and Ilya Sorokin had a 17-save shutout as the New York Islanders blanked the Arizona Coyotes 4-0. 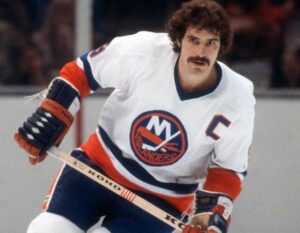 The Islanders last night announced Hall-of-Famer Clark Gillies had passed away at age 67. No cause of death was revealed. One of the great power forwards in NHL history, Gillies spent 12 of his 14 seasons with the Islanders, helping them win four straight Stanley Cups from 1980 to 1983. He also spent three seasons as Isles captain from 1976-77 to 1978-79 and played his final two NHL seasons with the Buffalo Sabres before retiring in 1988.

SPECTOR’S NOTE: Gillies was a core part of the Islanders dynasty who led by example and was beloved by teammates and fans. At 6’3” and 215 pounds, he was one of the largest players of his era. Affectionately nicknamed “Jethro” after the Beverly Hillbillies character, Gilles was also one of the toughest players of his era though he never had more than 100 penalty minutes in a season. My condolences to Gillies’ family, friends, former teammates and the Islanders organization.