​Are the Predators and Bruins interested in Canucks forwards Jake Virtanen and Adam Gaudette? What’s the latest on the Senators and Blue Jackets. Find out in today’s NHL rumor mill.

SPORTSNET: Elliotte Friedman reports it sounds like the Nashville Predators are among the teams interested in Vancouver Canucks winger Adam Gaudette. He also indicated the Boston Bruins were among the clubs checking out Canucks winger Jake Virtanen but he doesn’t know where that stands. He also said the San Jose Sharks had an interest in Virtanen during the offseason. 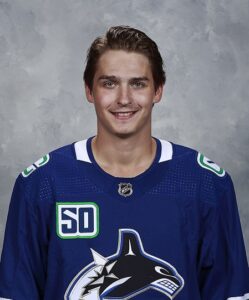 SPECTOR’S NOTE: The Vancouver Province’s Patrick Johnston recently reported the Canucks have been trying to move either (or perhaps both) Virtanen and Gaudette. However, sources say interest in the pair is “lukewarm at best.” He suggested Gaudette’s lower salary-cap hit makes him “somewhat more appealing” than Virtanen.

Johnston doubted either player would fetch much of a return that provides immediate help for the struggling Canucks. Any player they acquire from an American club would be unavailable for two-to-three weeks due to quarantine restrictions. Gaudette, meanwhile, claims he’s unconcerned about the trade speculation.

Speaking of the Predators, Friedman noted forward Nick Cousins was a healthy scratch from their 6-1 loss earlier this week to Tampa Bay. Cousins has had a rough start in Nashville and Friedman believes there would be interest from other clubs depending on what the Predators do.

Friedman reports the Ottawa Senators were looking to ease their crowded blueline once Erik Brannstrom got up to speed. He felt Mike Reilly was the most likely to move but that may have changed now that Brannstrom is sidelined. He also claims they’re trying to move center Derek Stepan closer to his family in Arizona.

SPECTOR’S NOTE: The Athletic’s Ian Mendes commented on Senators general manager Pierre Dorion’s remarks about Stepan during his appearance yesterday on TSN 1200. Dorion said the center hasn’t requested a trade to be close to his family. However, Mendes also pointed out Dorion, when asked point-blank about Stepan’s status, merely replied he’s a member of the team.

Mendes feels there might be a team interested in Stepan’s services. However, he doesn’t expect the Senators would get much back in return. My guess is a draft pick or prospect.

Friedman said the sudden retirement this week of Mikko Koivu has the Columbus Blue Jackets considering all options at center.

SPECTOR’S NOTE: That will include trades and waivers. Hey, Nick Cousins is a versatile two-way forward who can play center or wing. Hmmm…

NHL.COM: Toronto Maple Leafs center Auston Matthews became the first American-born player to score 30 goals in each of his first four NHL seasons in a 4-3 shootout loss to the Winnipeg Jets. Matthews reached the milestone by scoring twice against the Jets, who took the game on Blake Wheeler’s game-winner. With the win, the Jets hold the first wild-card berth (52 points) in the Western Conference. Before the game, Leafs defenseman Morgan Rielly admitted he’s been playing through a lower-body injury this season. Toronto Maple Leafs center Auston Matthews is the first American-born player to score 30 goals in each of his first four NHL seasons (Photo via NHL Images).

Kevin Hayes’ shorthanded second-period goal proved to be the game-winner as the Philadelphia Flyers held off the Washington Capitals 3-2, snapping a four-game losing skid.

The Dallas Stars picked up their fifth straight win by edging the Los Angeles Kings 2-1. Anton Khudobin made 30 saves while Jamie Benn and Blake Comeau scored within 37 seconds in the second period.

NBC SPORTS BAY AREA: San Jose Sharks captain Logan Couture reportedly fractured an ankle during his club’s 3-2 loss to the St. Louis Blues on Tuesday. He’s listed as week-to-week and could be sidelined for at least six weeks.

SPECTOR’S NOTE: Losing their leading scorer could be the death blow to the Sharks’ fading playoff hopes.

CHICAGO SUN-TIMES: Blackhawks goaltender Robin Lehner is ready to return from a knee injury, but center Dylan Strome will miss at least one game with a sprained ankle.

THE ORANGE COUNTY REGISTER: Despite Corey Perry’s suspension, the Anaheim Ducks still intend to honor his tenure with the club during tonight’s game against the Dallas Stars. Perry spent 14 seasons with the Ducks, helping them win the Stanley Cup in 2007 and winning Hart and Maurice Richard trophies in 2011. He signed with the Stars last summer after the Ducks bought out his contract.

SPECTOR’S NOTE: Perry’s chippy style of play aside, he was one of the best players in Ducks’ history. He sits second in games-played (988) and goals (372) and third in assists (404) and points (776). For a time, he was also among the league’s elite scorers.

TWINCITIES.COM: Minnesota Wild defenseman Matt Dumba donated $11.2K to help with Australia’s wildfire relief. He spent over two weeks last spring touring the country’s east coast and credits the experience with helping him mentally overcome a pectoral injury that cost him half of last season.

CALGARY SUN: The Flames re-signed defenseman Rasmus Andersson to a six-year contract extension worth an annual average value of $4.55 million.

SPECTOR’S NOTE: Andersson, 23, has quickly established himself as a key member of the Flames’ defense corps. This is a good move by management, locking him into a long-term deal that could become a bargain as he continues his development as a top-pairing rearguard.

SPECTOR’S NOTE: Maybe the department of player safety decided he suffered enough punishment after getting his butt kicked by Nazem Kadri following that hit.

STLTODAY.COM: Blues goaltender Jordan Binnington has agreed to a shootout challenge with pop star Justin Bieber with the proceeds going to a charity of the winner’s choice. It appears the challenge will take place during the offseason.