NHL.COM: Jason Robertson became the first player in Dallas Stars history to tally a hat trick in consecutive games to lead his club over the Minnesota Wild 6-3. Jake Oettinger made 34 saves for the win. The Stars (67 points) have won four straight games and moved ahead of the Nashville Predators into the first wild-card berth in the Western Conference. Kirill Kaprizov scored two goals for the Wild, who’ve dropped eight of their last 10 and cling to third place in the Central Division with 67 points. They activated defenseman Matt Dumba off injured reserve for this game and placed winger Jordan Greenway on IR. 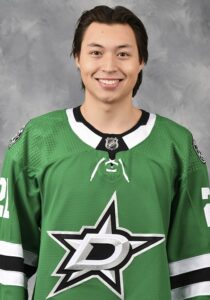 SPECTOR’S NOTE: Robertson is also the second player in franchise history to net back-to-back hat tricks, as Bill Goldsworthy did it with the Minnesota North Stars in 1971. The Stars sophomore is a rising talent, with 100 career points in 101 games.

The Tampa Bay Lightning got a franchise-record three goals in 32 seconds by Victor Hedman, Corey Perry and Mikhail Sergachev in a 6-3 victory over the Chicago Blackhawks. Hedman finished the game with two goals and Sergachev with three points. Blackhawks forwards Patrick Kane, Alex DeBrincat and Dylan Strome each had a goal and an assist. The Lighting (80 points) sit three points behind the first-place Carolina Hurricanes in the Eastern Conference.

Speaking of the Conference-leading Hurricanes, they extended their home points streak to 11 games by downing the Seattle Kraken 3-2. Carolina winger Teuvo Teravainen scored the game-tying goal in his 500th career NHL game while Martin Necas netted the winner in the third period. Antti Raanta made 28 saves for the win.

New York Rangers goaltender Igor Shesterkin kicked out 45 shots in a 4-1 victory over the Winnipeg Jets. New York winger Chris Kreider scored twice to reach 38 goals and sits one back of Toronto’s Auston Matthews for the goal-scoring lead. The Rangers are tied with the Pittsburgh Penguins with 77 points and hold second place in the Metropolitan Division with a game in hand.

SPECTOR’S NOTE: The Jets (58 points) are eight points out of the final Western Conference wild-card spot.

Jack Eichel scored on a power play with five seconds remaining in the third period as the Vegas Golden Knights squeaked past the Ottawa Senators 2-1. The goal was the result of a questionable tripping call on Senators defenseman Thomas Chabot with 46 seconds remaining in the period. Vegas holds third place in the Pacific Division with 68 points. Robin Lehner made 39 saves for the Golden Knights while the Senators’ Anton Forsberg stopped 40 shots.

SPECTOR’S NOTE: Forsberg got the call as the Senators placed Matt Murray on injured reserve before yesterday’s game.

The Los Angeles Kings got two goals by Andreas Athanasiou and a 19-save shutout by Cal Petersen to blank the Buffalo Sabres 3-0. The win keeps the Kings one point ahead of the Golden Knights in second place in the Pacific Division. Sabres forward Alex Tuch left the game with an injury in the third period.

An overtime goal by Rickard Rakell gave the Anaheim Ducks a 3-2 victory over the San Jose Sharks. Cam Fowler, Troy Terry and Adam Henrique each had two points for the Ducks (63 points) as they sit three points out of a Western wild-card spot. The Sharks have dropped 11 of their last 13 games.

SPECTOR’S NOTE: Sharks head coach Bob Boughner wasn’t happy over Rakell’s goal, claiming the Ducks had too many men on the ice at the time. “It’s a complete, disastrous blown call,” said Boughner, who also chastised the officiating crew for racing off the ice without coming over to the Sharks bench to explain the call.

The New Jersey Devils upset the St. Louis Blues 3-2 on an overtime goal by Dougie Hamilton. Jordan Kyrou and Vladimir Tarasenko each had two points for the Blues, who sit second in the Central Division with 71 points.

TRIBLIVE.COM: Pittsburgh Penguins winger Jason Zucker and defenseman Mike Matheson have resumed skating at the club’s practice facility. No timetable is set for the sidelined players to return to action.

THE SCORE: The Detroit Red Wings claimed defenseman Olli Juolevi off waivers from the Florida Panthers while the New York Islanders claimed forward Austin Czarnik from the Seattle Kraken.

NHL.COM: Sidney Crosby tallied his 499th career NHL goal and Danton Heinen scored twice as the Pittsburgh Penguins overcame a 2-0 deficit to double up the Boston Bruins 4-2. Penguins goaltender Tristan Jarry made 43 saves for the win but was also on the receiving end of a punch and a stick to the head from Bruins winger Brad Marchand late in the game. Marchand received a match penalty and could face supplemental discipline for attempting to injure Jarry. David Pastrnak scored both Bruins goals.

The Penguins are tied with the New York Rangers with 64 points but the latter holds second place in the Metropolitan Division with 30 wins while the Pens have 28. With 54 points, the Bruins remain four points behind the Washington Capitals, who hold the first wild-card berth in the Eastern Conference.

SPECTOR’S NOTE: The Bruins also lost captain Patrice Bergeron in the third period when he fell awkwardly into the boards following a collision with Crosby. He was assisted off and the Penguins captain received a minor penalty for roughing though the contact was minor and didn’t appear intentional on Crosby’s part. **CORRECTION: Crosby received the roughing penalty a minute later for a different incident.**

Speaking of the Capitals, they suffered their fourth loss in their last six games by falling 5-4 to the Columbus Blue Jackets. Boone Jenner snapped a 4-4 tie late in the third period while teammate Patrik Laine scored twice and collected an assist. Capitals captain Alex Ovechkin picked up an assist after emerging from COVID protocol yesterday.

Alex Pietrangelo scored to collect his 500th career NHL point while Laurent Brossoit kicked out 28 shots as the Vegas Golden Knights blanked the Edmonton Oilers 4-0. William Karlsson and Reilly Smith each had a goal and an assist. Oilers goalie Mike Smith made 24 saves in his first start since Jan. 5. The Golden Knights sit on top of the Pacific Division with 59 points while the Oilers (49 points) remain three points behind the Calgary Flames for the final Western Conference wild-card spot.

The Winnipeg Jets got a 28-save shutout from Connor Hellebuyck in a 2-0 victory over the Minnesota Wild. Mark Scheifele and Nate Schmidt were the goalscorers as the Jets (49 points) sit seven points behind the Flames. The Wild remain in third place in the Central Division with 59 points. Wild forward Marcus Foligno received an unsportsmanlike conduct penalty for kneeing Jets forward Andrew Copp in the head during their third-period scrap.

Vancouver Canucks defenseman Oliver Ekman-Larsson had three assists and winger Conor Garland scored against their former club in a 5-1 win over the Arizona Coyotes. With 48 points, the Canucks are four back of the Flames.

Ottawa Senators winger Brady Tkachuk scored two goals as his club held on to down the Carolina Hurricanes 4-3. The Hurricanes were down 4-0 but made it interesting with three goals in the third period. Anton Forsberg stopped 42 shots as the Senators have gone 5-2-2 in their last nine contests. The Hurricanes sit in first place in the Metropolitan Division with 65 points.

SPECTOR’S NOTE: Some pundits are wondering how many more embarrassing lopsided losses the Canadiens front office is willing to endure before they start making changes. Apparently, they’re willing to endure many more over the remainder of this season.

Trades seem unlikely at the moment because they probably prefer waiting until the March 21 deadline when they hope the value of their trade candidates is at their highest. A coaching change would have a more immediate effect but they committed to head coach Dominique Ducharme for the rest of the season and seem reluctant to change their minds.

The Canadiens have been walloped by injuries and illnesses to key players throughout the season. Ducharme hasn’t been placed in the best position as a coach to deal with these unique situations he’s faced since becoming their head coach. Nevertheless, they’re now mired in a toxic atmosphere. Many veterans appear to have tuned out Ducharme knowing he’s a goner at season’s end while their younger players are growing discouraged with the constant losing. That’s not going to help improve the club’s culture going forward.

Bottom line is the Canadiens are a laughingstock and an easy two points for most clubs, including those fading in the playoff race like the Devils. That’s not going to change over the remainder of this season. It might help improve the Canadiens’ chances of winning the draft lottery, but it’s not a healthy mood for a franchise facing what could be years of rebuilding.

THE ATHLETIC: Sources tell Fluto Shinzawa that the Boston Bruins don’t expect Tuukka Rask to continue his comeback. He felt discomfort in his surgically repaired hip following his last game on Jan. 24 and has been on injured reserve. He could finalize his retirement in the next several days.

SPECTOR’S NOTE: If Rask is calling it a career he’ll be retiring as one of the top goaltenders in Bruins history. He backstopped them to two Stanley Cup Finals (2013 and 2019), won the Vezina in 2014 and was a finalist in 2020, and is their franchise leader in games-played for goalies with 564 and win with 308.

THE PROVINCE: Vancouver Canucks defenseman Tucker Poolman remains sidelined with headaches and migraines and continues to meet with doctors.

ESPN.COM: The Anaheim Ducks named Hall-of-Famer and former captain Scott Niedermayer as a special advisor to their hockey operations department.