TSN: Nazem Kadri’s day with the Stanley Cup was a history-making one as he became the first Muslim to bring hockey’s holy grail to a mosque. The event took place on Saturday in Kadri’s hometown of London, Ontario. 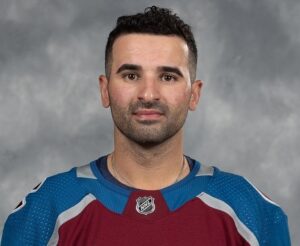 Kadri, 31, is the first Muslim player to win the Stanley Cup, doing so with the Colorado Avalanche in June. He recently signed a seven-year contract with the Calgary Flames. Kadri thanked his family and supporters. “I’m very appreciative, very privileged, and honored to be the first-ever Muslim to bring the Stanley Cup to the mosque,” he said. “It’s a big deal.”

SPECTOR’S NOTE: Kadri played a key role in the Avalanche’s march to the Stanley Cup. He continues to be an inspiration to Muslims who wish to take up the sport of hockey.

NEW YORK POST: The duo of Noah Dobson and Alexander Romanov could one day become the New York Islanders’ top defense pairing. They’ve never met as Romanov was acquired in a trade last month from the Montreal Canadiens. Both recently signed new contracts with the Isles.

“The little I know watching him play, he’s obviously a talented player,” said Dobson of Romanov. He skates really well and he’s got a physical presence out there and a high compete level.”

SPECTOR’S NOTE: Dobson enjoyed a 51-point breakout performance last season as one of the few bright spots in an otherwise forgettable season for the Isles. Romanov is more of a physical defensive rearguard but can contribute offensively. The Isles will have a solid defense for the next several years if Dobson and Romanov gel as a blueline tandem behind the top pairing of Ryan Pulock and Adam Pelech.

SPORTBLADET: Hampus Lindholm’s off-season home in Sweden was recently destroyed by fire. The Boston Bruins defenseman was not at the house when the blaze erupted and no one was hurt. Police are investigating arson but it’s believed the fire started in a side building in a battery charger.

SPECTOR’S NOTE: Lindholm also said he was appreciative of the Bruins for reaching out and offering their help.

FLORIDA HOCKEY NOW: After being bought out by the San Jose Sharks, Rudolfs Balcers is looking forward to joining the Presidents’ Trophy-winning Panthers. He netted a career-high 11 goals last season and believes he could’ve reached 20 with the opportunities he was given with the Sharks.

SPECTOR’S NOTE: Balcers could have a chance to tally 20 goals this season if he’s given the right role with the high-scoring Panthers.

← NHL Rumor Mill - August 27, 2022 Sunday NHL Rumor Roundup - August 28, 2022 →
We use cookies on our website to give you the most relevant experience by remembering your preferences and repeat visits. By clicking “Accept”, you consent to the use of ALL the cookies.
Do not sell my personal information.
Cookie SettingsAccept
Manage consent