NHL.COM: The Edmonton Oilers blew an early 3-0 lead but recovered on two goals by Ryan Nugent-Hopkins for a 5-3 victory over the Washington Capitals. Connor McDavid, Leon Draisaitl and Evander Kane also scored for the Oilers (49 points), who remain three points behind the Calgary Flames for the final wild-card spot in the Western Conference. 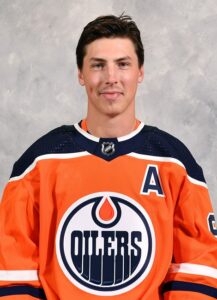 Speaking of the Flames, they maintained their lead over the Oilers by doubling up the Arizona Coyotes 4-2. Chris Tanev scored and collected three assists while Blake Coleman tallied twice. Clayton Keller had a goal and an assist for the Coyotes.

Los Angeles Kings center Phillip Danault netted two goals in a 5-3 win over the Detroit Red Wings. The Kings are tied with the Anaheim Ducks with 55 points but sit in second place in the Pacific Division with a game in hand. Red Wings forward Tyler Bertuzzi scored his 22nd goal of the season.

The Minnesota Wild got a 30-save shutout from goaltender Cam Talbot to blank the Chicago Blackhawks 5-0. Kevin Fiala extended his points streak to 12 games with a goal and an assist. The Wild sit in third place in the Central Division with 59 points.

Seattle Kraken goalie Philipp Grubauer turned in a 19-save shutout in a 3-0 win over the New York Islanders. Mason Appleton and Jared McCann each had a goal and an assist.

CHICAGO SUN-TIMES: Blackhawks chairman Rocky Wirtz lost his temper during a town hall meeting yesterday when The Athletic’s Mark Lazerus asked him about the club’s work to protect their players in the aftermath of Kyle Beach’s sexual assault allegations.

Asked the same question by another reporter, Wirtz angrily told them to “get off that subject.”

Wirtz later issued an apology to the reporters and the fans, saying his remarks “crossed the line.”

SPECTOR’S NOTE: You can see Wirtz’s outbursts in this link. The Blackhawks’ chairman has been roundly condemned for his petulant remarks. Wirtz acted as though the investigation into Beach’s allegations was an annoyance to be forgotten instead of a very serious issue that still resonates among fans and media. He undid everything his club had done since the investigation concluded to assure the public that what happened to Beach will never happen to another player again.

TSN: Pierre LeBrun reports former NHL star Pat Verbeek is set to become the next general manager of the Anaheim Ducks. Verbeek spent 21 seasons as a player and has worked with Steve Yzerman as an assistant GM with the Tampa Bay Lightning and Detroit Red Wings.

SPECTOR’S NOTE: The Ducks could make the official announcement as early as today. Verbeek has had considerable experience working with one of the league’s best general managers. The Ducks interim GM, Martin Madden, was considered among the front-runners for the role. It’ll be interesting to see if he remains as their assistant GM.

Washington Capitals captain Alex Ovechkin will miss the upcoming NHL All-Star Game after being placed in COVID protocol yesterday. He will be replaced by teammate Tom Wilson while Philadelphia Flyers forward Claude Giroux will take over from Ovechkin as captain of the Metropolitan Division. Vegas Golden Knights winger Jonathan Marchessault was also added to the All-Star Game roster.

The Columbus Blue Jackets report forward Eric Robinson will be sidelined for six weeks by a knee injury.

CBS SPORTS: The Florida Panthers have sent forward Noel Acciari to their AHL affiliate in Charlotte on a conditioning stint. He has yet to play this season due to an undisclosed injury.