NHL.COM: A 30-save performance by Semyon Varlamov carried the New York Islanders to a 2-1 victory over the Tampa Bay Lightning in Game 1 of their semifinal series. Mathew Barzal and Ryan Pulock scored for the Islanders while Lightning forward Brayden Point spoiled Varlamov’s shutout bid. Andrei Vasilevskiy made 29 saves for the Bolts. Game 2 is Tuesday night in Tampa Bay. 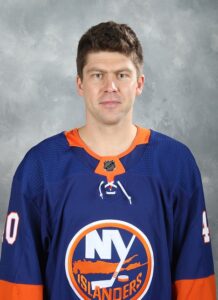 SPECTOR’S NOTE: A solid defensive performance by the Islanders in shutting down the Lightning’s potent offense. This game marked just the second time in these playoffs the Bolts were held to just one goal.

“I’m pushing Dr. Arruda but we have to be fair,” said Legault. “We have to look if we can (have) more people (while) respecting the rules that are necessary because we need to go gradually in order not to see a bump (in COVID-19 cases) in the next few weeks.”

SPECTOR’S NOTE: The Canadiens are currently allowed to admit 2,500 fans to their home games. Perhaps it’ll be doubled to 5,000. This push is linked to the fact the Vegas Golden Knights are now back at full capacity in their arena. However, it’s doubtful we’ll see a full house in the Bell Centre for this series.

THE DALLAS MORNING NEWS: Stars defenseman Stephen Johns announced his retirement yesterday via Instagram. He detailed his battles with depression after missing considerable playing time to post-traumatic headaches over the last three seasons. He intends to travel across the United States to help people struggling with their mental health.

SPECTOR’S NOTE: Johns’ playing career was cut short by head injuries. He spent just four seasons in the NHL, with 33 points in 167 games. Best wishes to him in his future endeavors and in his battle with depression.

THE NEWS & OBSERVER: The Carolina Hurricanes signed defenseman Eric Gelinas to a one-year, two-way contract worth $750K at the NHL level. He last played in the NHL in 2016-17 with the Colorado Avalanche and spent the last three seasons with Rogle BK in the Swedish Hockey League.

← Sunday NHL Rumor Roundup - June 13, 2021 NHL Rumor Mill - June 14, 2021 →
We use cookies on our website to give you the most relevant experience by remembering your preferences and repeat visits. By clicking “Accept”, you consent to the use of ALL the cookies.
Do not sell my personal information.
Cookie SettingsAccept
Manage consent