NHL.COM: Two goals in 12 seconds by Colin Blackwell and Chris Kreider lifted the New York Rangers to a 6-2 drubbing of the Boston Bruins in front of 1,800 fans at Madison Square Garden. Ryan Strome had a goal and two assists for the Rangers. Bruins’ captain Patrice Bergeron scored to collect his 889th career point, surpassing Bobby Orr for fifth on the club’s all-time points list while linemate Brad Marchand netted his 300th career goal. The Bruins have dropped four of their last five contests. 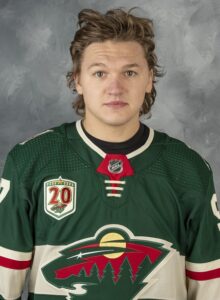 The Minnesota Wild picked up their fifth straight victory by downing the Los Angeles Kings 3-1, snapping the latter’s six-game win streak. Wild rookie Kirill Kaprizov scored his fifth of the season and leads the Wild and all NHL rookie skaters with 16 points in 17 games.

SPECTOR’S NOTE: Kaprizov must be considered the favorite to win the Calder Memorial Trophy as rookie of the year. The smooth-skating 23-year-old is very entertaining to watch and a big reason why the Wild are playing so well of late.

Nazem Kadri had a goal and two assists as the Colorado Avalanche held off the Arizona Coyotes 3-2. Mikko Rantanen had a goal and an assist while rookie goalie Hunter Miska made 16 saves for this first NHL win.

TSN: Toronto Maple Leafs center Auston Matthews is listed as day-to-day with an injured hand. Goaltender Frederik Andersen (lower-body injury) was on the ice yesterday ahead of Leafs practice while winger Joe Thornton and defenseman Jake Muzzin joined their teammates in practice.

SPECTOR’S NOTE: Matthews’ injury is reportedly considered a minor issue. He and his teammates are slated to meet the Edmonton Oilers tonight.

SPECTOR’S NOTE: Eichel’s absence could force Sabres coach Ralph Krueger to insert Jeff Skinner into the lineup. The struggling winger was a healthy scratch for the club’s last three games.

STLTODAY.COM: Vladimir Tarasenko could soon return to the Blues’ lineup before the club’s six-game road trip ends on March 8. The 29-year-old winger has been recovering from offseason shoulder surgery but is taking part in practice with his teammates.

SPECTOR’S NOTE: The Blues have struggled of late so the return of their top sniper should provide a welcome boost to their offense. They’ll have to do some juggling with their salary cap space to make room for his $7.5 million annual salary-cap hit when he comes off long-term injury reserve.

THE ATHLETIC: Jim Rutherford told Pierre LeBrun he’s ready to work in the NHL only a month after suddenly stepping down as general manager of the Pittsburgh Penguins. Rutherford insists he was “treated great” by the Penguins and has no regrets. He also said he has no geographical limitations on where he’d like to work.

SPECTOR’S NOTE: Rutherford has a solid reputation around the NHL as one of the savviest general managers in the business. I doubt he’ll be unemployed for long.

NHL.COM: Former Montreal Canadiens general manager Irving Grundman passed away on Friday at age 93 following a short illness. He was the Habs GM from 1978-79 to 1982-83, winning the Stanley Cup in his first season.

SPECTOR’S NOTE: My condolences to Grundman’s family, friends, and the Canadiens’ organization. During his tenure as GM he drafted future Hall-of-Famers Chris Chelios and Guy Carbonneau, as well as such noteworthy players as Mats Naslund, Craig Ludwig and Mike McPhee.

← NHL Up and Down the Boards: Boucher Tops Ducharme on Habs Coaching Odds NHL Rumor Mill - February 27, 2021 →
We use cookies on our website to give you the most relevant experience by remembering your preferences and repeat visits. By clicking “Accept”, you consent to the use of ALL the cookies.
Do not sell my personal information.
Cookie SettingsAccept
Manage consent