​The NHL is still pushing for a mid-January start to 2020-21, the Wild sign Andrew Hammond as Alex Stalock remains sidelined, the Blackhawks name Stan Bowman president of hockey operations, and more in today’s morning coffee headlines.

NHL.COM: League commissioner Gary Bettman said the 2020-21 season could start in mid-January with a shortened schedule, a temporary divisional realignment with one of them composing all seven Canadian teams, division games only, and games in home arenas, hub cities or a combination of both. 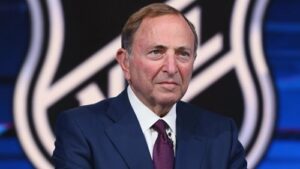 Bettman indicated discussions between the NHL and NHL Players Association are ongoing as they try to adjust to government regulations at every level arising from COVID-19. He reiterated that playing an entire season in a quarantine bubble similar to the 2020 playoffs isn’t feasible. However, the league could consider moving teams toward a hub if enough of them cannot hold training camps or games in their home arenas due to local restrictions.

The commissioner maintains the biggest challenge facing the league remains to ensure the health and safety of the players and the support staff while ensuring they’re not doing anything that puts local communities at risk.

SPORTSNET: Elliotte Friedman reports five cities are under consideration if the NHL begins the season in hub locations. “Columbus, Newark, Vegas, and Toronto/Edmonton” are potential hubs but they won’t be permanent bubbles as in the playoffs.

KUKLA’S KORNER: cites TSN’s Frank Seravalli tweeting he’s heard the NHL is considering a triple header for opening night, centered around the Tampa Bay Lightning raising its 2020 Stanley Cup banner (“vs. CHI?”), with a “big East clash (NYR/BOS?) first and marquee West matchup late (COL/STL?).” While the league remains focused on a Jan. 13 start, Seravalli said they’re not beholden to that date. “Could be a week later.”

THE SCORE: cited Seravalli reporting Bettman sought the council of Dr. Anthony Fauci from the National Institutes of Health over the course of the pandemic. Fauci recommended the best way to start the NHL season safely was to do so in hub cities. While that’s not the preference of the teams and the players, Seravalli said that option remains on the table.

MONTREAL GAZETTE: Quebec premier Francois Legault believes the Canadiens and the league can put measures in place to protect the players. The Habs are hoping to receive permission to stage training camp at its practice facility in Brossard.

SPECTOR’S NOTE: I’m growing skeptical that the league can stage its season-opener on Jan. 13. Recent reports suggest a vote of approval by the league board of governors and the NHLPA executive would have to come by the end of this week to meet the necessary timelines.

The 2020-21 season will take place. The team owners and the players want it to happen. However, it could take a little longer than expected to reach an agreement because of the work required to address the issues raised by the pandemic. Jan. 13 remains possible but I wouldn’t be surprised if the season opener gets moved into late January.

TWINCITIES.COM: Minnesota Wild goaltender Alex Stalock is sidelined indefinitely with an upper-body injury. It’s expected promising Kaapo Kahkonen will back up starter Cam Talbot to begin the 2020-21 season. Talbot was signed in October to a three-year, $11 million contract.

The Wild also confirmed the signing of goalie Andrew Hammond to a one-year, two-way contract.

SPECTOR’S NOTE: Hammond will likely start the season with their affiliate in Iowa when the AHL begins its season on Feb. 5.

CHICAGO SUN-TIMES: The Blackhawks named Stan Bowman as their president of hockey operations. He’ll retain his role as general manager.

SPECTOR’S NOTE: The move has raised questions over whether Bowman can be his own boss. I wonder if this is a possible transition move if ownership decides at some point to make a change in the GM’s office.

CALGARY SUN: Former NHL goaltender Jason LaBarbera takes over as the Flames full-time goalie coach as the club announced the creation of a restructured goaltending department.

SI.COM/THE HOCKEY NEWS: Ken Hadall, the man charged with theft of hockey memorabilia from Walter Gretzky, has deep ties with the Gretzky family, as well as Hockey Hall-of-Famers Doug Gilmour and Bobby Orr. Hadall was slated for induction into the Bobby Orr Hall of Fame in Parry Sound, Ontario.

Meanwhile, Ontario Provincial Police officer June Dobson also faces fraud and breach of trust charges in connection to a stick from Wayne Gretzky’s childhood sold to a memorabilia dealer for $6,000.00. The two cases aren’t related but the Dobson case stemmed from the Hadall investigation. She was a friend of Walter Gretzky for many years.

SPECTOR’S NOTE: Both have not been convicted of the charges and remain innocent until proven guilty. If the latter, they would’ve taken advantage of one of the kindest men in hockey.

TSN: Darren Dreger reports issues such as roster size and taxi squads are slowing down negotiations between the NHL and NHLPA aimed at starting the 2020-21 season on Jan. 13. Frank Seravalli said the effect on the salary cap of transferring a player between the roster and the taxi squad is also part of the discussion. At this point, it would be handled similar to the rules regarding a demotion to the AHL.

Pierre LeBrun points out teams are at the mercy of local health restrictions, especially in Canada. As of Tuesday, the Toronto Maple Leafs and Ottawa Senators each have over 30 players that have returned, while the Winnipeg Jets have nine, the Montreal Canadiens under 10, the Edmonton Oilers have 12 and the Calgary Flames 26.

SPECTOR’S NOTE: Those health restrictions vary from city to city and province to province. It’s affecting quarantine rules and use of training facilities, which could explain why the Jets and Canadiens have a low number of players in their respective cities.

Dreger reports the league is looking into allowing a limited number of fans to attend games in select markets depending on the restrictions of each city in each state. Seravalli points out that will be only if the league can open in all 31 of its cities. That remains in doubt as some teams, like the San Jose Sharks, are planning to open training camp in Arizona because of restrictions in their own market.

COLORADO HOCKEY NOW: Adrian Dater reports sources are saying the concept of hub cities is no longer on the drawing board. He said each team will play their regular-season home games in their own buildings with travel limited only to games within a team’s division.

Because of the new COVID-19 vaccines, the NHL feels confident it can stage a regular season in which teams travel from city to city despite the strict protocols. The league remains adamant it will not attempt to jump the queue to obtain vaccinations ahead of others.

SPECTOR’S NOTE: This NH season is going to open but the projected Jan. 13 start date could change. A vote approving the format for ’20-’21 needs a vote of approval by the league board of governors and the NHLPA’s 31-member executive. It’s required by the end of this week to meet the timeline for a Jan. 13 start. That date could be pushed into late January if more time is required to work out the details.

SPORTSNET: Two people were arrested by Brantford, Ontario police after Wayne Gretzky memorabilia was stolen from his father’s home. A three-month investigation involving searches of homes in Ontario and Alberta by police (including the RCMP and Ontario Provincial Police) recovered several items with an estimated combined value of over $500K USD. The investigation is ongoing.

SPECTOR’S NOTE: Walter Gretzky is the world’s most famous hockey dad and among the kindest people in hockey. Shame on those people for stealing from him.

YAHOO SPORTS: Hockey Hall-of-Famer Mark Messier is suing the CEO of an Alberta cannabis company after he allegedly lost his $500K investment. Messier claimed the company also used his celebrity to raise $30 million in funding.

THE SCORE: Philadelphia Flyers winger Oskar Lindblom is cancer-free just over a year after being diagnosed with Ewing’s sarcoma. He finished his treatments on July 2 and suited up with the Flyers in the 2020 playoffs.

TSN: cites The Athletic’s Michael Russo reporting the Minnesota Wild are close to signing free-agent goaltender Andrew Hammond. He speculates this could mean Wild backup Alex Stalock could be hurt entering training camp. Stalock reportedly hasn’t been on the ice.

SPECTOR’S NOTE: No indication if Karlsson has an out-clause if he signs with an NHL club. The report indicating it’s for the remainder of the season suggests he didn’t get any NHL offers to his liking. The flattened salary cap for this season could be a factor, which doesn’t bode well for comparable players still available in the UFA market.

STLTODAY.COM: The Blues have promoted Ryan Miller (no, not the NHL goaltender) as their new assistant general manager.

WHL.COM: The Western Hockey League has delayed the start of its 2020-21 season because of public health restrictions across Western Canada and the US Pacific Northwest. The board of governors will meet in January to discuss possible start dates.

SPECTOR’S NOTE: That could affect the development of WHL players hoping to be selected in the 2021 NHL Draft.

← NHL Rumor Mill - December 15, 2020 NHL Rumor Mill - December 16, 2020 →
Next Entries »
We use cookies on our website to give you the most relevant experience by remembering your preferences and repeat visits. By clicking “Accept”, you consent to the use of ALL the cookies.
Do not sell my personal information.
Cookie SettingsAccept
Manage consent