​Recaps of Monday’s game, the three stars of the week are revealed, Evander Kane is free to sign with another team while NHLPA files a grievance on his behalf, the latest COVID updates and more in today’s NHL morning coffee headlines.

NHL.COM: The Boston Bruins overcame a 2-0 deficit to thump the Washington Capitals 7-3. Matt Grzelcyk scored and picked up four assists while Brad Marchand and David Pastrnak each scored twice and collected an assist. The Bruins (40 points) opened a four-point lead over the Detroit Red Wings for the final Eastern Conference wild-card berth while the Capitals (49 points) are winless in their last four contests 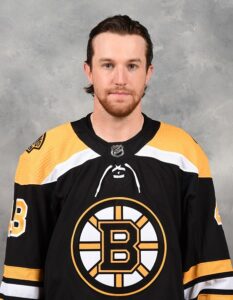 A third-period goal by Nazem Kadri lifted the Colorado Avalanche over the Seattle Kraken 4-3 to extend their home winning streak to 12 games. Nicolas Aube-Kubel tallied twice for the Avalanche while Kraken goaltender Philipp Grubauer made 31 saves against his former club. The Avs (46 points) sit one point behind the second-place St. Louis Blues in the Central Division.

The Los Angeles Kings picked up their fourth win in their last five games by dropping the New York Rangers 3-1. Kings goalie Cal Petersen turned aside 22 shots while teammate Trevor Moore collected two assists. Mika Zibanejad scored for the Rangers. With the win, the Kings (41 points) moved into third place in the Pacific Division.

NBC SPORTS BAY AREA: As expected, the NHL Players Association filed a grievance on behalf of Evander Kane when the San Jose Sharks terminated his contract Sunday after the 30-year-old winger cleared unconditional waivers. The process will now go before arbitration but there’s no date set yet for a hearing with an independent arbiter.

For the moment, the Sharks are free and clear of the remainder of Kane’s seven-year, $49 million contract signed in May 2018. The winger is now an unrestricted free agent and can sign with another NHL club. If the NHLPA wins the grievance, he would have two valid NHL contracts, so there will have to be contingencies in place to prevent that.

SAN JOSE HOCKEY NOW: Sheng Peng spoke with NHL deputy commissioner Bill Daly, who indicated Kane is free to sign and play with another NHL team right away, with details and contingencies to be worked out later.

SPECTOR’S NOTE: It’s rather unusual that a player could sign a contract with another NHL club while awaiting the outcome of his grievance over the termination of his former contract. If the PA grievance is successful, the Sharks would have to pay Kane the remainder of his contract. It might have to count against their cap hit or perhaps it would be “off-the-books” payments. We won’t know until an arbiter makes their ruling and that could be weeks away.

Meanwhile, there’s reportedly plenty of interest in Kane around the league despite his off-ice issues and reputation as a troublesome teammate. I’ll have more on that in today’s NHL rumor mill.

PITTSBURGH HOCKEY NOW: Evgeni Malkin could be ready to make his season debut tonight against the Anaheim Ducks. The Penguins superstar has been recovering from offseason knee surgery.

SPECTOR’S NOTE: The addition of a healthy and productive Malkin should be a significant boost to the Penguins’ offense. It would be like acquiring a player of his talent via trade, which could make it less likely they’ll be major buyers by the March 21 trade deadline.

NHL.COM: Tonight’s game between the Carolina Hurricanes and Philadelphia Flyers has been postponed for COVID-related reasons.

NBC SPORTS: Dallas Stars head coach Rick Bowness was fined $25,000.00 by the NHL for smashing a stick on the bench in a post-game meltdown over the officiating in Sunday’s 2-1 loss to the St. Louis Blues.

THE COLUMBUS DISPATCH: The Blue Jackets have suspended forward Gregory Hofmann for refusing to return to the club to complete his one-year contract. The Jackets gave Hofmann permission to return to Switzerland in late December for the birth of his first child. He signed a one-year, $900K contract last summer with the Jackets and had seven points in 24 games.