​Recaps of Wednesday’s action, the league announces updates to its 2021-22 schedule, the Canadiens introduce Kent Hughes as their new GM, and more in today’s NHL morning coffee headlines.

NHL.COM: Colorado Avalanche goaltender Pavel Francouz turned in a 34-save shutout to blank the Anaheim Ducks 2-0. Samuel Girard and Nazem Kadri were the goal scorers as the Avalanche picked up their fourth straight win and their ninth in the last 10 games. They also opened a four-point lead over the St. Louis Blues atop the Western Conference with 55 points. 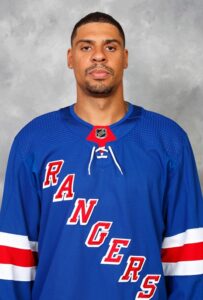 The New York Rangers overcame a 3-1 deficit and rolled to a 6-3 victory over the Toronto Maple Leafs. Adam Fox and Ryan Reaves each scored two goals as the Rangers moved into first place in the Metropolitan Division with 56 points. Mitch Marner had a goal and an assist for the Leafs, who remain in third place with 51 points in the Atlantic Division.

Arizona Coyotes goalie Karel Vejmelka kicked out 35 shots in a 4-1 win over the New Jersey Devils. Lawson Crouse and Loui Eriksson each had two points. Coyote defenseman Jakob Chychrun picked up an assist in his return to action after being sidelined for 11 games by an upper-body injury and COVID protocols.

NHL.COM: The league will play 95 games from Feb. 7 – 22 as part of its comprehensive update to its 2021-22 schedule. That three-week window was originally scheduled for the 2022 Winter Olympic break. With the NHL withdrawing from the Beijing Games, this period will be used to make up a number of games postponed by COVID protocols.

THE SCORE: Newly appointed Montreal Canadiens general manager Kent Hughes held his introductory press conference yesterday at the Bell Centre. His plans for the club include building an offensive-minded club with a focus on speed and puck possession.

SPECTOR’S NOTE: Hughes will have two months to determine which players he could shop before the March 21 trade deadline. Pending UFAs such as Ben Chiarot are the most likely to be moved. There are also questions over the futures of veterans such as Carey Price, Brendan Gallagher and Jonathan Drouin over whether they’ll want to be part of a full rebuild if that’s the direction the Habs take under Hughes. Those will likely be addressed in the offseason given their expensive contracts.

NHL.COM: Jack Eichel will be traveling with the Vegas Golden Knights on its four-game road trip next week. However, head coach Peter DeBoer said the 25-year-old center is at least a month or two away from making his debut with the club. The Golden Knights acquire Eichel from the Buffalo Sabres in November and he underwent artificial disk replacement surgery on Nov. 12. He started skating with the club earlier this month in a non-contact jersey.

SPORTSNET’s Nick Kypreos reports he’s heard the NHL will need until the end of this week to complete its investigation into whether Evander Kane violated COVID protocols during his tenure with the San Jose Sharks AHL affiliate. No decision is expected until next week at the earliest.

SPECTOR’S NOTE: There’s speculation Kane could soon sign a new NHL contract if the league rules in his favor, perhaps with the Edmonton Oilers.

SPECTOR’S NOTE: Ehlers is expected to be sidelined for at least three games.

NBC SPORTS: One day after the Boston Bruins retired Willie O’Ree’s No. 22, the U.S. House of Representatives unanimously passed a bill to award the 86-year-old the Congressional Gold Medal. He was a hockey pioneer by becoming the first black man to play in the NHL.

SPECTOR’S NOTE: Congratulations to O’Ree for this recognition of his work as a hockey trailblazer during and after his playing days.