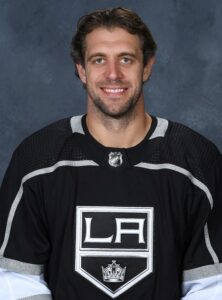 SPECTOR’S NOTE: Kopitar sits second in assists (727) and third in points among the Kings’ all-time leading scorers. He’s 33 assists behind Marcel Dionne but still a long way from breaking the latter’s franchise record of 1,307 points.

The Nashville Predators got a 38-save shutout by Juuse Saros to blank the Ottawa Senators 3-0. Roman Josi, Jeremy Lauzon and Filip Forsberg were the goal scorers as the Predators (19-14-6) sit one point behind the Oilers. The Senators, meanwhile, dropped to 18-19-3 on the season.

Seattle Kraken goaltender Martin Jones stopped 21 shots to blank the Montreal Canadiens 4-0 to earn their fifth straight road victory. Matty Beniers, Vince Dunn and Eeli Tolvanen each had a goal and an assist as the Kraken improved to 23-12-4 to sit four points behind the Kings in third place in the Pacific Division with 50 points. The Canadiens dropped to 16-22-3 and have lost eight of their last nine contests.

SPECTOR’S NOTE: Earlier in the day, the Canadiens recalled goalie Cayden Primeau as Jake Allen is sidelined day-to-day with an upper-body injury.

The Philadelphia Flyers upset the Buffalo Sabres 4-0 with rookie goalie Samuel Ersson kicking out 28 shots for his first career NHL shutout. Joel Farabee and Travis Konecny each had two points for the Flyers (16-18-7) while the Sabres (20-16-2) remain four points out of the final wild-card berth in the Eastern Conference with 42 points.

SPECTOR’S NOTE: Earlier in the day, the Sabres activated goaltender Eric Comrie off injured reserve and loaned netminder Ukka-Pekka Luukkanen to their AHL affiliate in Rochester.

THE ATHLETIC: Following their 4-1 win over the Coyotes in Arizona on Sunday, the Pittsburgh Penguins flew to Montreal to attend the funeral of Claude Fouquet, the father of teammate Kris Letang.

SPECTOR’S NOTE: Nice to see the Penguins going the extra mile as a team to support a teammate in his time of grieving. My condolences to Letang and his family.

DETROIT HOCKEY NOW: Tyler Bertuzzi is expected to make his return to the Red Wings lineup for Tuesday’s game against the Winnipeg Jets. He’s been limited to just nine games this season by two hand injuries. His last game was against the Jets on Nov. 30.

WASHINGTON HOCKEY NOW: Anthony Mantha called his being a healthy scratch from the Capitals’ game against Columbus on Sunday a “wake-up call”. He’s struggled with consistency this season, managing 23 points in 42 games this season.

THE ORANGE COUNTY REGISTER: Anaheim Ducks forward Justin Kirkland was hospitalized after a car accident on Sunday while on his way to play against the Boston Bruins. He has full mobility and is communicating with family and teammates. He could be released from the hospital within the next 24-48 hours.

THE TENNESSEAN: Nashville Predators broadcaster Pete Weber expects to return to work after undergoing brain surgery on Monday for hydrocephalus. He anticipates being ready to return to the booth for the Predators’ home game on Saturday against the Buffalo Sabres and hopes to return to the road in three weeks.

SPECTOR’S NOTE: Best wishes to Weber for a speedy recovery.