The Colorado Avalanche clinch the Presidents’ Trophy, the opening-round schedule of the 2021 Stanley Cup Playoffs is released, plus the latest on Nikita Kucherov, John Carlson, Patrick Marleau and more in today’s NHL morning coffee headlines.

NHL.COM: The Colorado Avalanche clinched the Presidents’ Trophy for the best regular-season record by defeating the Los Angeles Kings 5-1. Tyson Jost scored twice for the Avalanche, who’ll face the St. Louis Blues in the opening round of the upcoming 2021 Stanley Cup Playoffs. 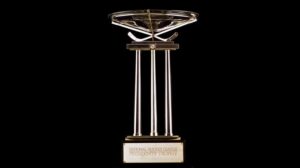 SPECTOR’S NOTE: Congratulations to the Avalanche on winning their first Presidents’ Trophy in 20 years.

Speaking of the Blues, they completed their regular-season schedule by overcoming a 3-0 deficit to thump the Minnesota Wild 7-3. David Perron, Brayden Schenn and Jordan Kyrou each scored two goals. The Wild will face off against the Vegas Golden Knights in the opening round.

The Calgary Flames downed the Vancouver Canucks 4-1. Earlier in the day, the Canucks confirmed sidelined center Elias Pettersson (upper-body injury) will miss their remaining games of this season but he’s working hard on a healthy return for next season.

SPECTOR’S NOTE: The Canucks still aren’t revealing the details of Pettersson’s injury but it’s believed to involve a wrist or hand.

The full schedule for the opening round of the 2021 Stanley Cup Playoffs was released Thursday.

Tampa Bay Lightning captain Steven Stamkos and winger Nikita Kucherov practiced with their teammates on Thursday and are expected to be in the lineup for Game 1 of their series against the Panthers. Stamkos missed the final 16 games of the regular season with a lower-body injury while Kucherov missed the entire season following hip surgery on Dec. 29.

Washington Capitals defenseman John Carlson said he’ll be ready for his club’s upcoming series against the Boston Bruins. He missed the final two games of the regular season with a lower-body injury.

NBC SPORTS BAY AREA: Patrick Marleau plans to return for a 24th NHL season and isn’t ruling out coming back to the San Jose Sharks.

SPECTOR’S NOTE: The 41-year-old Marleau set the NHL record this season for most career games. This season was also statistically the worst of his career with just nine points in 56 games. If the Sharks don’t bring him back he could end up seeking a training camp tryout with another club.

THE PLAYERS’ TRIBUNE: Tyler Toffoli has embraced life with the Montreal Canadiens following his tenures with the Los Angeles Kings and Vancouver Canucks. He cited the Montreal fans and the atmosphere at the Bell Centre among his reasons for signing with the Canadiens last fall and looks forward to when fans can return to the building.

SPECTOR’S NOTE: Toffoli said he wants what Montreal fans want: winning the Stanley Cup. He praised his teammates, singling out Nick Suzuki and Cole Caufield. He also revealed he thought he would re-sign with the Canucks last fall but they never made him a contract offer.

Former New York Islanders defenseman Johnny Boychuk has taken on a coaching and advisory role with the club. Boychuk’s career was prematurely ended by an eye injury last season.

CHICAGO SUN-TIMES: The Blackhawks are being sued by a former player for alleged sexual assault in 2010 by their former video coach.

← Sunday NHL Rumor Roundup - October 18, 2020 NHL Morning Coffee Headlines - October 19, 2020 →
We use cookies on our website to give you the most relevant experience by remembering your preferences and repeat visits. By clicking “Accept”, you consent to the use of ALL the cookies.
Do not sell my personal information.
Cookie SettingsAccept
Manage consent