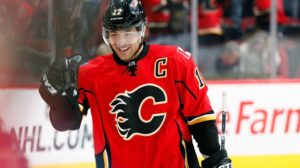 Former Calgary Flames captain Jarome Iginla is among the Hockey Hall of Fame’s Class of 2020 (Photo via NHL.com).

SPECTOR’S NOTE: Congratulations to the HHoF Class of 2020.

It wasn’t surprising that Iginla and St. Pierre were inducted. With 625 goals, Iginla was one of the top goal scorers in NHL history, winning the Richard Trophy twice and the Art Ross in 2002. St. Pierre was perhaps the greatest goalie in women’s hockey history.

Hossa was also a first-ballot inductee. He tallied 525 goals and 1,134 points, won three Stanley Cups with the Chicago Blackhawks, and developed into a strong two-way forward.

Holland got in as a builder for his work with the Detroit Red Wings, building on a solid foundation to turn that club into a league powerhouse and Stanley Cup champion.

Wilson’s induction was long overdue. He was one of the best defensemen of the 1980s, winning the Norris Trophy in 1982. He was also a first-team all-star in 1982 and a two-time second-team all-star while netting 827 points in 1,024 games.

Lowe had a fine NHL career, winning six Stanley Cups with the Edmonton Oilers and New York Rangers. Nevertheless, I don’t think he should have received the nod over more deserving former stars like Alexander Mogilny, Rod Brind’Amour, and Daniel Alfredsson.

SPECTOR’S NOTE: The players are returning to their NHL cities by Friday to allow sufficient time to test and self-isolate those who test positive for 14 days. That would allow suitable recovery time before training camp.

The next month will determine if the 24-team playoff tournament begins in August as planned. A significant spike in positive tests could jeopardize the tournament.

THE SCORE: Older NHL coaches are putting their trust in the league’s restart plan despite being in a higher risk category for COVID-19. The Athletic’s Pierre LeBrun reports 12 active members on NHL coaching staffs will be 60-or-older by the end of June. The league won’t impose age restrictions on the coaching staff, leaving it up to the individuals to determine if they wish to participate or not.

VANCOUVER SUN: Ben Kuzma reports a snag in local health protocols for positive COVID-19 tests could threaten Vancouver’s chances to become one of the two host cities for Phase 4.

SPECTOR’S NOTE: The Athletic’s Thomas Drance reports the disagreement is in the details. Pierre LeBrun said the Canucks continue to work on this issue with the league, but he and Drance agree it could prove insurmountable.

Former Sportsnet pundit John Shannon reports the NHL Players Association wants the July 1 bonus payments to the players to proceed as scheduled. Shannon said he’s heard the league prefer deferring those payments to the end of the tournament. More than $300 million are owed in bonus payments.

SPECTOR’S NOTE: Shannon indicates the bonus payments are among the issues currently being discussed by both sides. They tentatively agreed to extend expiring contracts to Oct. 31.

THE SCORE: Construction of the Calgary Flames’ new arena will begin in August 20201.

NEWSDAY: Despite the owner of Nassau Coliseum shutting down the arena as he seeks a buyer, a county executive suggests the New York Islanders could still use the building next season until their new arena in Belmont Park is ready.

← 2020 NHL Free Agent Class Could Be Adversely Affected By a Flat Salary Cap NHL Rumor Mill - June 25, 2020 →
We use cookies to ensure that we give you the best experience on our website. If you continue to use this site we will assume that you are happy with it.Ok