The Lightning reveal their list of injured players, the 2022 draft order is complete, and more in today’s NHL morning coffee headlines. 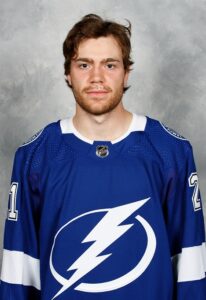 General manager Julien BriseBois revealed Point wasn’t the only player hampered by injuries during the Lightning’s run to the Stanley Cup Final.

Forward Pierre-Edouard Bellemare entered the playoffs with an MCL injury in one of his knees. Forwards Anthony Cirelli, Nick Paul and Corey Perry suffered shoulder/AC joint sprains during the Eastern Conference Finals against the New York Rangers. Cirelli also dislocated his other shoulder while Paul suffered an MCL sprain in the Stanley Cup Final.

Forward Brandon Hagel fractured a foot during the second-round series with the Florida Panthers. Defenseman Ryan McDonagh suffered a mangled finger blocking a shot in the Rangers series.

Nikita Kucherov suffered a sprained MCL in the Stanley Cup Final. BriseBois also said nearly every player on the roster sustained multiple contusions over the course of the playoffs.

SPECTOR’S NOTE: Lightning head coach Jon Cooper wasn’t kidding earlier this week when he said they would’ve had to ice half of their minor-league roster if this had been the regular season. Such is the price paid in pursuit of hockey’s greatest price.

NHL.COM: The end of the Stanley Cup Final means the final positions in the first round of the 2022 NHL Draft have been set. The Montreal Canadiens hold the first-overall selection having won the draft lottery in May. The Edmonton Oilers hold the No. 29 position and the Winnipeg Jets No. 30 having acquired that pick from the New York Rangers. The Lightning will select 31st overall and the Stanley Cup champion Avalanche will pick 32nd overall.

The draft will be held at the Bell Centre in Montreal with the first round on Thursday, July 7 and rounds two through seven on Friday, July 8.

SPECTOR’S NOTE: Wright was considered the top prospect throughout this season and remained so on most final rankings, including NHL Central Scouting’s list.

Bear in mind that whoever is ranked No. 1 doesn’t necessarily mean they’ll be chosen by the Canadiens. Quality depth at center has been a longstanding issue for the Habs. While they could select Slafkovsky, I expect they’ll choose Wright or Logan Cooley of the US National Team Development Program.

SPECTOR’S NOTE: An interesting review of how the scouts and the teams got it wrong with those players. Because of those flops, there’s a belief the 2012 draft was one of the worst in NHL history. However, Larkin reminds us that Vezina Trophy winners Andrei Vasilevskiy and Connor Hellebuyck, Lady Byng Trophy winner Jaccob Slavin, puck-moving blueliner Morgan Reilly and scoring winger Filip Forsberg were among the notable stars to emerge from that draft.

BOSTON HOCKEY NOW: Former Bruins center Marc Savard has become in demand to return to the NHL assistant coaching ranks. However, he’s not interested in leaving his job as the bench boss of the OHL’s Windsor Spitfires unless he gets an offer to become an NHL head coach.

WGR 550: Buffalo Sabres co-owner Kim Pegula is progressing well and recovering from an undisclosed health issue. The family requests their need for privacy continue to be respected during this time.

SPECTOR’S NOTE: Best wishes to Pegula for a full recovery.

DAILY FACEOFF: Scotiabank and Canadian Tire are pausing their sponsorship of Hockey Canada over a settled lawsuit that stated several OHL players sexually assaulted a woman at a Hockey Canada event in the summer of 2018. Hockey Canada has come under fire for its handling of the investigation and the lawsuit, including the federal government passing a motion calling for an independent investigation of the organization.

THE ATHLETIC: Sportsnet has confirmed it is canceling its Hometown Hockey series after eight seasons. Host Ron MacLean will be returning full-time to “Hockey Night in Canada”. It is not immediately clear what the cancellation means for co-host Tara Stone.

In the Sunday NHL rumor roundup, a collection of the latest Canucks speculation, the latest coaching rumors plus updates on the Stars and Devils.

THE ATHLETIC: Thomas Drance and Rick Dhaliwal recently reported the Vancouver Canucks were thought to be ready to restart contract talks this past week with Brock Boeser’s representatives. They have sufficient salary-cap flexibility to tender a $7.5 million qualifying offer to Boeser by the July 11 deadline to retain his rights.

They feel the Canucks are unlikely to take Boeser to arbitration and could qualify him if a compromise isn’t reached beforehand. It’s believed that’s something the winger’s camp prefers as well. It could be a short-term extension, perhaps for three years and below the $7.5 million qualifier.

SPECTOR’S NOTE: Boeser’s annual cap hit on his current deal is $5.875 million. He’s going to seek a significant raise, especially after seeing what teammates Elias Pettersson and Quinn Hughes got last season. Granted, their raises came from the previous management but Boeser’s within his rights to seek a big pay bump. It probably won’t reach $7.5 million but it could be close to $7 million.

Team sources also doused reports suggesting Oliver Ekman-Larsson could be shopped in a cost-cutting move this summer. While the club may have done some due diligence on his trade value, they remain impressed with Ekman-Larsson as a player and a person. 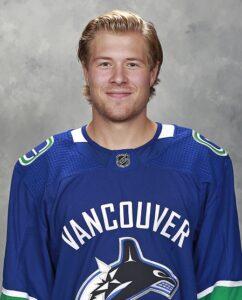 SPECTOR’S NOTE: Ekman-Larsson’s big cap hit ($7.26 million) through 2026-27 plus his full no-movement clause would’ve made him difficult to move during an offseason when the salary cap is rising by just $1 million.

THE PROVINCE: Ben Kuzma believes J.T. Miller will draw plenty of trade interest if the Canucks cannot free up sufficient cap space to sign the 29-year-old center to a contract extension. He drew plenty of interest in this season’s trade market from the New York Rangers but Kuzma believes his career-best 99-point performance this season will draw a number of suitors attracted to his versatility.

Re-signing Miller will be expensive. Kuzma cited the Rangers’ Mika Zibanejad and the San Jose Sharks’ Tomas Hertl as comparables. Both were making similar to Miller’s current cap hit ($5.5 million) before signing lucrative long-term deals. Zibanejad’s is for eight years and $68 million while Hertl’s is also for eight years and is worth $65.1 million.

SPECTOR’S NOTE: Either decision comes with risk for the Canucks. Trade Miller and the return might not pan out as hoped for their long-term plans. Sign him for over $8 million annually on an eight-year deal and it could become a drain on their cap space that grows burdensome as his skill decline in the final years of the deal.

The Rangers could revisit their interest in Miller but that will depend on whether they get pending UFAs Ryan Strome and Andrew Copp signed before July 13. They could also consider more affordable options on long-term deals in the trade market, such as the Winnipeg Jets’ Mark Scheifele if he becomes available.

SPORTSNET: Jeff Marek and Elliotte Friedman provided an update on Barry Trotz as the former New York Islanders head coach is drawing interest from teams seeking a new bench boss. He will meet with the Philadelphia Flyers this week. Marek believes the Flyers want to be thorough in assessing their coaching candidates. The Winnipeg Jets also met with Trotz while the Vegas Golden Knights and Detroit Red Wings could also be among his suitors.

The Dallas Stars could circle back to Rick Tocchet as a coaching candidate to replace Rick Bowness, who stepped down earlier this week. They had spoken with Tocchet earlier this season but couldn’t reach an agreement. They could also have an interest in the OHL’s Windsor Spitfires’ Marc Savard.

Speaking of the Stars, Marek believes they’d like to sign center Roope Hintz to a contract extension this summer. That could mean moving out a body. There could also be some clarity soon regarding the future of pending UFA defenseman John Klingberg.

Friedman reports the New Jersey Devils are considering all their options for the offseason. That could include shopping their first-round pick (second overall) in this year’s draft. He believes they should soon have a list of players that they would be interested in acquiring in exchange for that pick.

← NHL Morning Coffee Headlines - May 22, 2022 NHL Morning Coffee Headlines - May 23, 2022 →
We use cookies on our website to give you the most relevant experience by remembering your preferences and repeat visits. By clicking “Accept”, you consent to the use of ALL the cookies.
Do not sell my personal information.
Cookie SettingsAccept
Manage consent