​The Lightning down the Blue Jackets in a five-overtime marathon. Check out the details in the recaps of the opening round of the 2020 Stanley Cup Playoffs in today’s NHL morning coffee headlines.

NHL.COM: The Tampa Bay Lightning needed five overtime periods to edge the Columbus Blue Jackets 3-2 in Game 1 of their opening-round playoff series. Brayden Point tallied the winner at 10:27 of the fifth-overtime period, marking the fourth-longest game in NHL history, lasting over six hours and 13 minutes. The goal was Point’s second of the game. Pierre-Luc Dubois had a goal and an assist for the Jackets. 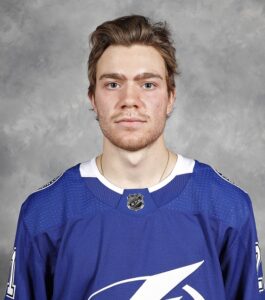 The two teams combined for a record 151 shots, with the Lightning firing a record 88. Blue Jackets goaltender Joonas Korpisalo set a record with 85 saves while Bolts netminder Andrei Vasilevskiy kicked out 61. Jackets defenseman Seth Jones also set a record for minutes-played by a skater, logging 65 minutes and six seconds of ice time.

SPECTOR’S NOTE: That was the most entertaining multiple overtime game I’ve seen since the Buffalo Sabres edged the New Jersey Devils 1-0 in Game 6 of their 1994 Eastern Conference quarterfinal series. These types of games usually turn into long, dull defensive slogs with few quality scoring chances. Not this game. Every period was fast-paced and exciting, with the Lightning having the bulk of the offensive opportunities. A tough loss for the Jackets, who’ll have little time to recover before Game 2 tomorrow.

Because of the length of the Lighting-Blue Jackets game, the NHL rescheduled Game 1 between the Boston Bruins and Carolina Hurricanes to 11 am ET today.

SPECTOR’S NOTE: This was the right call by the league. It reportedly would’ve taken nearly two hours following the end of the Bolts-Jackets game to clean the dressing rooms and players benches and to prepare the ice surface for the Bruins and Hurricanes.

Rasmus Andersson’s second-period goal proved to be the game-winner as the Calgary Flames held off the Dallas Stars 3-2 in Game 1 of their opening-round playoff series. Dillon Dube scored twice as the Flames jumped to a 2-0 lead but the Stars tied it on goals by Denis Gurianov and Jamie Benn nine seconds apart. Stars defenseman Stephen Johns left the game in the second period and is listed as “unfit to play.” Stars center Tyler Seguin was held without a shot.

SPECTOR’S NOTE: Dube had a heck of a game for the Flames, especially with his second goal that looked like a Pavel Bure special. Teammate Milan Lucic is also playing well, picking up his fifth point (1-4-5) in as many games.

Reilly Smith scored twice and collected an assist to lead the Vegas Golden Knights over the Chicago Blackhawks 4-1 in Game 1 of their opening-round series.

WINNIPEG SUN: Jets center Mark Scheifele said he doesn’t believe Flames winger Matthew Tkachuk deliberately intended to injure him in Game 1 of their qualifying-round series. Scheifele suffered an injury to the back of his leg following a collision with Tkachuk, who reached out to the Jets center explaining he was skating too fast and lost control as he approached Scheifele along the boards.

SPECTOR’S NOTE: Jets coach Paul Maurice had thought otherwise, accusing Tkachuk of a dirty hit and doubling down a day later. It was obvious, however, that the collision was accidental. I think Tkachuk got a bad rap here because of his well-earned reputation for questionable tactics. If it had been Tkachuk’s teammate Johnny Gaudreau colliding with Scheifele, nobody would’ve thought it was dirty.

CBS SPORTS: Edmonton Oilers forward Tyler Ennis suffered a fractured leg and ligament damage near his ankle during an Aug. 5 game against the Chicago Blackhawks. He’s expected to be recovered in time for the 2020-21 season, but it might not be with the Oilers. Ennis is an unrestricted free agent at the end of the season.

STLTODAY.COM: Blues forward Ivan Barbashev is expected to rejoin his teammates in Edmonton on Friday after traveling to St. Louis to be with his wife during the birth of his son.

Hearing that the Habs have given permission to Florida to speak with AGM Scott Mellanby. ← NHL Rumor Mill - August 3, 2019 Sunday NHL Rumor Roundup - August 4, 2019 →
We use cookies to ensure that we give you the best experience on our website. If you continue to use this site we will assume that you are happy with it.Ok