The Golden Knights, Devils and Kraken extend their winning streaks, actor Ryan Reynolds is interested in buying the Senators, the ongoing fallout from the Mitchell Miller saga, and more in today’s NHL Morning Coffee Headlines.

NHL.COM: The Vegas Golden Knights extended their winning streak to eight games by defeating the Toronto Maple Leafs 4-3. Reilly Smith scored the tying goal shorthanded in the third period and the game-winner in overtime as the Golden Knights (12-2-0) moved atop the overall standings with 24 points. Timothy Liljegren scored twice for the Leafs (7-4-3) as their winning streak ended at three games. 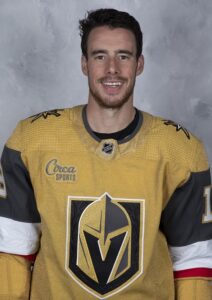 New Jersey Devils goaltender Vitek Vanecek made 33 saves in a 3-2 victory over the Calgary Flames. Nico Hischier and Dougie Hamilton each had a goal and an assist as the Devils (10-3-0) extended their win streak to seven games while the Flames (5-5-2) are winless in their last six contests.

SPECTOR’S NOTE: Before this game, the Devils announced that goaltender Mackenzie Blackwood will be sidelined for three-to-six weeks with a sprained MCL while winger Ondrej Palat is out for eight-to-10 weeks after undergoing groin surgery last week. Meanwhile, Flames winger Jonathan Huberdeau missed this game and is listed as day-to-day with an upper-body injury.

The Seattle Kraken extended their winning streak to five games by taming the Nashville Predators 5-1. Jordan Eberle scored twice while Andre Burakovsky had a goal and two assists for the 8-4-2 Kraken. Filip Forsberg netted the Predators’ only goal as they fall to 5-7-1.

Connor McDavid and Leon Draisaitl each scored second-period goals and Jack Campbell stopped 35 shots as the Edmonton Oilers (8-6-0) held off the Tampa Bay Lightning 3-2. Brandon Hagel and Alex Killorn replied for the 7-5-1 Lightning.

SPECTOR’S NOTE: Oilers winger Evander Kane left the game early in the second period after he was accidentally sliced on one of his wrists by the skate blade of Lightning forward Patrick Maroon. Following the game, Oilers general manager Ken Holland said Kane was stabilized and taken to hospital where he underwent surgery on his wrist. No word yet as to how long he could be sidelined.

Third-period goals by Adam Pelech, Brock Nelson and Anders Lee rallied the New York Islanders over the New York Rangers 4-3. Semyon Varlamov made 37 saves for the Islanders (9-5-0) while the Rangers (6-5-3) got two assists from Artemi Panarin.

The Winnipeg Jets extended their points streak to seven games with a 5-1 victory over the Dallas Stars. Mark Scheifele scored twice while Kyle Connor and Mason Appleton each had three points as the Jets’ record improves to 8-3-1. Jason Robertson replied for the 8-4-0 Stars.

Philadelphia Flyers goaltender Felix Sandstrom made 27 saves for his first NHL win to defeat the St. Louis Blues 5-1, handing the latter their eighth straight loss. Travis Konecny, Owen Tippett and Noah Cates each had a goal and an assist for the 7-3-2 Flyers while Ryan O’Reilly tallied for the 3-8-0 Blues.

SPECTOR’S NOTE: Sandstrom got the start for the Flyers as Carter Hart was out with a non-COVID-related illness.

The Los Angeles Kings got a 21-save shutout from Jonathan Quick in a 1-0 victory over the Minnesota Wild (5-6-1). Gabriel Vilardi netted his team-leading 10th goal of the season as the Kings improve to 8-6-1. Wild star Kirill Kaprizov was ejected for high-sticking Kings defenseman Drew Doughty.

SPECTOR’S NOTE: A first-round pick in the 2017 draft, the 23-year-old Vilardi is blossoming into a scorer after struggling through injuries and inconsistent play earlier in his career. He’s also among the league leaders in goals thus far this season.

Vancouver Canucks captain Bo Horvat scored twice and Spencer Martin stopped 37 shots to beat the Ottawa Senators 6-4 and improve their record to 4-6-3. The Senators (4-8-0) got two-point performances from Tim Stutzle and Alex DeBrincat but their winless streak is now at six.

SPECTOR’S NOTE: This game was overshadowed by the drama for both clubs off the ice.

Actor and prospective Senators owner Ryan Reynolds took in this game at Canadian Tire Centre and received a standing ovation from the fans. Earlier this week, he indicated his interest in buying the club, which was officially put up for sale last week. However, he also told Tonight Show host Jimmy Fallon on Monday that he needs a deep-pocketed partner to help him acquire the team.

Meanwhile, Canucks head coach Bruce Boudreau defended his team’s efforts after president of hockey operations Jim Rutherford criticized their work ethic and structure. Rutherford’s recent comments have generated speculation among NHL pundits that Boudreau could be replaced or a shakeup could be coming for the roster.

The Montreal Canadiens got a 41-save effort from goalie Jake Allen as they nipped the Detroit Red Wings 3-2 on shootout goals by Cole Caufield and Nick Suzuki. Mike Hoffman scored both goals in regulation for the 6-6-1 Canadiens while the Red Wings (7-3-3) got goals from Austin Czarnik and Lucas Raymond.

Arizona Coyotes goalie Karel Vejmelka stopped 32 shots while Clayton Keller had a goal and an assist in a 4-1 victory over the Buffalo Sabres. Tage Thompson replied for the Sabres (7-6-0) while the Coyotes improved to 5-6-1.

ESPN.COM: The Boston Bruins face limited options after cutting ties with Mitchell Miller following a public outcry two days after signing him to an entry-level contract. The Bruins’ original intention was to send Miller to their AHL affiliate in Providence. He remains under contract with the club.

One option would see the Bruins pay Miller to stay home and then buy him out at the end of the season for one-third of the remaining value of the contract. Another would be working with the defenseman’s agent to reach a settlement allowing him to become a free agent. The Bruins or the league could also seek to terminate the deal based on Miller’s history but the NHLPA is expected to file a grievance if they go that route.

BOSTON HOCKEY NOW: Eustace King, who represents Miller, claimed the Bruins and every team they spoke to knew about the timeline of events from Miller and the classmate he bullied as they grew up and recently as well.

Bruins president Cam Neely said on Monday the Bruins intended to terminate Miller’s contract based on “new information” about the defenseman’s bullying of his victim, Isaiah Meyer-Crothers. King, however, countered that there was no new information to the best of his camp’s knowledge and believes the Bruins made the decision based on the public backlash.

King also contradicted claims made by Jodi Meyer-Crothers, Isaiah’s mother, saying Miller had never reached out and apologized to her son until recently. However, a statement from the Hockey Diversity Alliance criticizing the Bruins’ handling of this situation indicated that Isaiah had recently contacted them to express his distress over Miller’s signing.

THE DENVER POST: Colorado Avalanche winger Valeri Nichushkin is expected to be sidelined for about a month following ankle surgery. Meanwhile, defenseman Bowen Byram is out week-to-week with a lower-body injury while Samuel Girard (lower body) is listed as day-to-day.

FLORIDA HOCKEY NOW: Panthers defenseman Aaron Ekblad is expected to return to action on Saturday for the first time since suffering a groin injury on Oct. 17.