​Seattle’s expansion franchise chooses Kraken as its team name, a look at what life will be like inside the host cities for the playoff tournament, and updates on Jonathan Toews, Sidney Crosby, and more in today’s NHL morning coffee headlines.

THE SEATTLE TIMES: Seattle’s NHL expansion franchise yesterday announced its team name will be “Kraken”. The club also unveiled its logo, a stylized S to reflect the mythical monster squid, as well as their home and away jerseys. 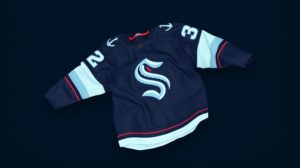 SPECTOR’S NOTE: I’m not a fan of the Kraken name, and I’m not just talking about the rum (I’m a scotch man, but I digress). I felt they should’ve picked one that better reflected the Seattle/Pacific Northwest area rather than a creature from Scandinavian lore. It’s already ensured their fans will be nicknamed “Krakheads” and their arena “The Krakhouse.”

Nevertheless, I think they did very well with the jersey rollout. The logo is well done, I like the color scheme, and the anchor on each shoulder incorporating Seattle’s Space Needle is a nice touch. That jersey could become a popular NHL merchandise item.

NHL.COM: The league yesterday released details of what life will be like for the teams in the two host cities under Phase 4 of the return-to-play plan. That included videos of accommodation and amenities within each of the Secure Zones in Edmonton and Toronto, special theme nights for selected games, and in-game sounds and supplemented crowd noise for televised games.

SPECTOR’S NOTE: There will be plenty of facilities and recreational activities available for everyone involved in the tournament. Those will be crucial for morale as they adjust to life under a quarantine bubble.

“I don’t know where he got that from,” said Toews. He added, “I voted yes. If anything, I kind of wanted the guys in our room to educate themselves on what was going on to the best of their ability and ultimately make their own decision.”

SPECTOR’S NOTE: It’ll be interesting to hear Friedman’s response. He’s among the NHL media’s well-connected pundits. In his recent 31 Thoughts podcast, he said he’d heard from several people claiming Toews had voted against the plan.

TRIBLIVE.COM: Pittsburgh Penguins captain Sidney Crosby didn’t participate in yesterday’s scrimmage but skated on his own yesterday. He hasn’t participated in practice since leaving the ice on Saturday. While league protocols prevent the Penguins from revealing details, a source explained Crosby’s absence was a precautionary measure as he deals with a minor ailment.

THE NEWS & OBSERVER: Carolina Hurricanes defenseman Dougie Hamilton has been listed as unfit to play after missing practice yesterday. Hamilton had recovered from a broken leg suffered last January but left the ice on Wednesday in some discomfort. Hurricanes coach Rod Brind’Amour said he hoped this wasn’t a long-term issue.

SPECTOR’S NOTE: Hamilton was mentioned as a possible Norris Trophy finalist before his injury. While the Hurricanes adjusted to playing without him, they’re a much better team with the puck-moving blueliner in the lineup. It would be a blow to their Stanley Cup hopes if he’s sidelined for another indefinite period.

THE DENVER POST: Cale Makar could be close to returning to practice. The Colorado Avalanche defenseman hasn’t skated with his teammates since Saturday but took part yesterday in individual on-ice drills. Meanwhile, Avs captain Nathan MacKinnon skipped scrimmage yesterday. No explanation was given for his absence.

NBC SPORTS PHILADELPHIA: Carter Hart didn’t participate in the Philadelphia Flyers’ final training camp scrimmage yesterday. The young goaltender was absent from practice since Sunday but did take part in some individual on-ice training. As per league protocols, no explanation was given for his absence.

THE SCORE: Columbus Blue Jackets coach John Tortorella isn’t pleased with the effort of two or three of his key players during Phase 3 training camp. He didn’t mention names, but he did stop practice yesterday to yell at his players after 30 seconds of the opening drill.

SPECTOR’S NOTE: Tortorella’s probably not the only coach involved in the playoff tournament to have a concern about the performance of some players in training camp following a long layoff. They just don’t express it as openly as the Blue Jackets’ colorful bench boss.

MONTREAL GAZETTE/WINNIPEG SUN: Canadiens defenseman Xavier Ouellet and Jets blueliner Anthony Bitetto revealed they had tested positive for COVID-19. Both have since recovered and rejoined their teammates.

← NHL Rumor Mill - July 23, 2020 NHL Rumor Mill - July 24, 2020 →
We use cookies on our website to give you the most relevant experience by remembering your preferences and repeat visits. By clicking “Accept”, you consent to the use of ALL the cookies.
Do not sell my personal information.
Cookie SettingsAccept
Manage consent