NHL.COM: Tampa Bay Lightning defenseman Mikhail Sergachev tied a league record in his club’s 6-3 victory over the Washington Capitals. Sergachev scored twice and collected two assists in the first period, tying Bobby Orr as the only blueliners to collect multiple goals and multiple assists in the opening period of a game. The Lightning’s record improved to 8-6-1 while the Capitals fall to 7-8-2. 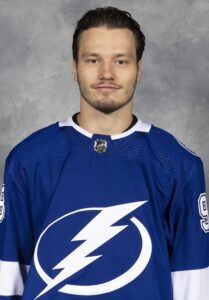 The Boston Bruins set a franchise record by winning their ninth straight home game to open a season by defeating the Vancouver Canucks 5-2. Hampus Lindholm collected three assists, Linus Ullmark made 29 saves and Pavel Zacha scored what proved to be the winning goal as the Bruins (14-2-0) regained sole possession of first place in the overall standings with 28 points. J.T. Miller and Sheldon Dries replied for the 4-9-3 Canucks, who’ve now lost three straight games.

An overtime goal by Mark Scheifele lifted the Winnipeg Jets (9-4-1) over the Seattle Kraken by a score of 3-2. Scheifele tallied twice while Blake Wheeler picked up his 300th career goal when he tied the game in the dying seconds of regulation. Jordan Eberle and Brandon Tanev replied for the 8-5-3 Kraken.

The Dallas Stars bolstered their record to 9-5-1 by dropping the Philadelphia Flyers 5-1. Joe Pavelski and Esa Lindell each had a goal and two assists while Jake Oettinger kicked out 37 shots for the win. Travis Konecny scored for the Flyers, who fall to 7-6-2 as they’ve lost three straight games.

Shootout goals by Nick Bonino and Alexander Barabanov gave the San Jose Sharks a 3-2 win over the Minnesota Wild. The Sharks overcame a 2-0 deficit on third-period goals by Steven Lorentz and Nico Sturm as they improve to 5-9-3. Frederick Gaudreau and Connor Dewar tallied for the Wild (7-6-2).

New York Rangers goaltender Igor Shesterkin stopped 31 shots while Adam Fox had a goal and an assist to beat the Arizona Coyotes 4-1. The Rangers’ record is now 8-6-3 while the Coyotes fall to 6-8-1. Clayton Keller scored the Coyotes’ only goal.

DAILY FACEOFF: Ottawa Senators defenseman Thomas Chabot will be sidelined for at least a week with a concussion suffered during Saturday’s game against the Philadelphia Flyers.

SPECTOR’S NOTE: Chabot’s absence significantly weakens an already thin Senators’ defense corps. They’ll be fortunate if their blueline workhorse is out for just a week. He will miss three upcoming games at a time when the 5-8-1 Sens are trying to climb out of the basement in the Atlantic Division.

NHL.COM: The Los Angeles Kings placed winger Brendan Lemieux has been placed on injured reserve with a lower-body injury.

TRIBLIVE.COM: The Pittsburgh Penguins have sent defenseman Mark Friedman to their AHL affiliate in Wilkes-Barre/Scranton.

← Who Will Be Canada's Team In The 2022-23 NHL Season? NHL Rumor Mill - November 14, 2022 →
We use cookies on our website to give you the most relevant experience by remembering your preferences and repeat visits. By clicking “Accept”, you consent to the use of ALL the cookies.
Do not sell my personal information.
Cookie SettingsAccept
Manage consent