The Rangers take Game 1 of the Eastern Conference Finals, the latest on the Avalanche and Oilers, the Canadiens make Martin St. Louis their full-time head coach, and more in today’s NHL morning coffee headlines.

NHL.COM: The New York Rangers drew first blood with the Tampa Bay Lightning with a convincing 6-2 victory in Game 1 of the Eastern Conference Finals. A four-goal second period powered New York to victory with Filip Chytil scoring two of them. Artemi Panarin, Mika Zibanejad and Frank Vatrano each had a goal and an assist while Igor Shesterkin made 37 saves for the win. Steven Stamkos and Ondrej Palat replied for the Lightning. Game 2 goes Friday night in New York. 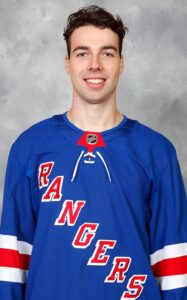 SPECTOR’S NOTE: This game was close until the Rangers blew it open midway through the second period, controlling the play and pinning Tampa Bay in their own zone for lengthy stretches of time. Their “Kid Line” of Chytil, Alexis Lafreniere and Kaapo Kakko made the difference as they gave the Lightning fits throughout this game. Shesterkin frustrated the Bolts’ scorers, shutting the door after Palat’s goal.

The Lightning looked rusty from their 10-day layoff following their second-round sweep of the Florida Panthers. I anticipate a better performance from them in Game 2. The Bolts also suffered a blowout series-opening loss to the Toronto Maple Leafs in the first round but rallied back and eventually took that series.

The Rangers were the better team in Game 1 and their victory was well-deserved. Nevertheless, they must avoid getting swept up too much in the emotion of this big win. Their opponent hasn’t lost consecutive postseason games since 2019.

SPORTSNET: Speaking of the Lightning, head coach Jon Cooper confirmed before Game 1 that sidelined center Brayden Point probably won’t play in this series against the Rangers. He suffered a lower-body injury in Game 7 of their first-round series with the Toronto Maple Leafs.

SPECTOR’S NOTE: Cooper said Point is over the worst of his injury and is improving daily. Footage emerged yesterday showing him skating with full equipment for the first time since he got hurt. However, it doesn’t seem likely he’ll be returning for this series.

Edmonton Oilers head coach Jay Woodcroft declined to say whether Mike Smith or Mikko Koskinen will be the starting goaltender for Game 2 against the Colorado Avalanche in the Western Conference Finals on Thursday. Smith was replaced in the second period of Game 1 after giving up six goals on 25 shots. Koskinen gave up one goal on 21 shots in the 8-6 loss.

SPECTOR’S NOTE: Lacking NHL experience behind the bench, St. Louis did a good job stepping in back in February and improving the struggling Canadiens. This rebuilding club still has a long way to go to become a playoff contender again but they obviously liked what they saw in St. Louis’ efforts in improving struggling players like Cole Caufield.

SPECTOR’S NOTE: Of all the awards Kopitar has won in his long and successful NHL career, the Messier Leadership Award is one of them.

THE SCORE: Carolina Hurricanes goaltender Frederik Andersen missed the 2022 playoffs with an MCL tear. He suffered the injury on April 16 in a game against the Colorado Avalanche.

SPECTOR’S NOTE: We don’t know if a healthy Andersen might’ve changed the outcome of the Hurricanes’ second-round series against the New York Rangers. Still, having their starter on the sidelines certainly didn’t help the Canes.

← The Notable Deals of the 2020 NHL Trade Deadline NHL Morning Coffee Headlines - February 25, 2020 →
We use cookies on our website to give you the most relevant experience by remembering your preferences and repeat visits. By clicking “Accept”, you consent to the use of ALL the cookies.
Do not sell my personal information.
Cookie SettingsAccept
Manage consent