​Game recaps, three stars of the week, the latest on the Canadiens’ search for a new GM and more in today’s NHL morning coffee headlines.

NHL.COM: The Calgary Flames downed the Pittsburgh Penguins 2-1 on a shootout goal by Mikael Backlund. Jacob Markstrom made 21 saves as the Flames have won six of their last eight games. Penguins winger Jake Guentzel scored to extend his points streak to 10 games.

Arizona Coyotes goaltender Karel Vejmelka kicked out 46 shots for his first career shutout to blank the Winnipeg Jets 1-0. Antoine Roussel scored the only goal as the Coyotes handed the Jets their sixth loss in their last seven contests.

Conor Garland’s second-period goal proved the game-winner as the Vancouver Canucks snapped a four-game losing skid by nipping the Montreal Canadiens 2-1. Elias Pettersson also scored for the Canucks. Canadiens goalie Jake Allen made 40 saves in a losing cause.

The Seattle Kraken picked up their fourth win in their last five games by thumping the Buffalo Sabres 7-4. Jared McCann and Mason Appleton each scored twice for the Kraken while Jeff Skinner also tallied two goals for the Sabres. 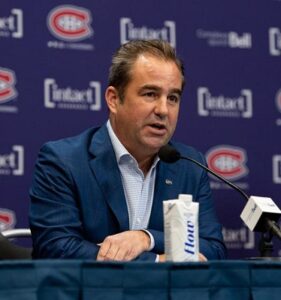 “I strongly believe that this organization needs a fresh start,” said Molson, who said he waited until Bergevin had recovered from a recent bout of COVID-19 to replace him. He added Bergevin understood Molson’s reasons behind the decision.

Molson also explained why the Canadiens want a bilingual general manager and head coach because they’re located in a province and society that mostly speaks French. He pointed out the importance of respecting the two languages and communicating to their fans in their market.

The Canadiens co-owner also said the final hockey decisions will be made by the new general manager but indicated Gorton will help guide the new GM as they grow accustomed to the role. He didn’t rule out the possibility of a rebuild if that’s what Gorton and the new GM believe will be best.

Molson also revealed NHL commissioner Gary Bettman was one of the people who recommended hiring Gorton. He said he has “a great relationship” with Bettman so he spoke with the commissioner before hiring the former Blueshirts GM. Molson indicated Bettman knew Gorton because he worked for the NHL and also had experience in the New York market.

SPECTOR’S NOTE: It’s safe to say that Gorton will still hold considerable influence over management decisions. The question is finding someone who can work well in tandem with their new executive VP of hockey ops. Whoever gets that role will need assurances that they won’t become Gorton’s “yes man”.

Former Canadiens star Vincent Damphousse was mentioned by some pundits as a potential candidate. However, he told RDS it’s not something he wants to do for a living.

SPECTOR’S NOTE: No surprise there given Kane’s well-documented off-ice issues and his hefty $7 million annual average value. However, there are reports the Sharks are attempting to trade him. I’ll have more in today’s Rumor Roundup.

TWINCITIES.COM: The Minnesota Wild will retire Mikko Koivu’s No. 9 jersey on March 13 at the Xcel Energy Center. He will be the first player in franchise history to have his number retired. Koivu spent 15 seasons with the Wild, scoring 205 goals and 504 assists for 709 points and was their first permanent captain. He played briefly last season for the Columbus Blue Jackets before retiring.