Kris Letang returns to the Penguins following a stroke, the Leafs and Mitch Marner continue their streaks, the Lightning’s Steven Stamkos extends his points streak, and more in today’s NHL Morning Coffee Headlines.

NHL.COM: The Pittsburgh Penguins defeated the Buffalo Sabres 3-1 as defenseman Kris Letang returned to their lineup for the first time since suffering a minor stroke 12 days ago. Letang was held pointless but played a team-leading 22:14 of ice time while Sidney Crosby scored two goals and collected an assist for the Penguins, who’ve won five straight and improved their record to 16-8-4. Peyton Krebs replied for the Sabres as they dropped to 12-14-2. 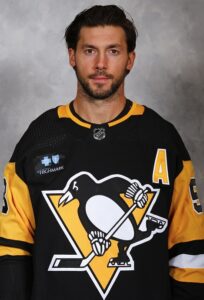 SPECTOR’S NOTE: The Sabres played without winger Jeff Skinner. He’s serving a three-game suspension for cross-checking Penguins winger Jake Guentzel in the face during their game on Friday.

Toronto Maple Leafs winger Mitch Marner extended his franchise-record points streak to 22 games in a 5-4 overtime victory over the Calgary Flames. Marner scored the game-winner and collected an assist on one of William Nylander’s two goals as the latter reached a single-game personal best of five points. The Leafs (18-5-6) are unbeaten in their last 14 games (11-0-3). Noah Hanifin tallied twice for the Flames as they slipped to 13-11-4.

SPECTOR’S NOTE: The Leafs (42 points) are one point behind the league-leading Boston Bruins. Before the game, Leafs head coach Sheldon Keefe said forward Nick Robertson could miss six-to-eight weeks with a shoulder injury. He is not expected to undergo surgery.

Three unanswered third-period goals by Brayden Point, Mikhail Sergachev and Steven Stamkos lifted the Tampa Bay Lightning over the Florida Panthers 4-1. Stamkos extended his points streak to 13 games while the Lightning boosted their record to 17-9-1. The Panthers dropped to 13-11-4.

Minnesota Wild goaltender Filip Gustavsson made 35 saves to shut out the Vancouver Canucks by a score of 3-0. Matt Boldy, Connor Dewar and Sam Steel were the goal scorers as Minnesota sits at 14-11-2. Wild winger Kirill Kaprizov was held scoreless, bringing his 14-game points streak to an end. The Canucks dropped to 12-13-3.

Detroit Red Wings forward David Perron scored in his 1,000th career NHL game but his club dropped a 3-2 decision to the Dallas Stars. Nils Lundkvist got the winner in overtime as the Stars improved to 16-7-5 while the Wings sit at 13-8-6.

The Carolina Hurricanes blanked the New York Islanders 3-0 on a 16-save shutout by Pyotr Kochetkov. Paul Stastny, Jesperi Kotkaniemi and Jordan Staal scored for the Hurricanes (15-6-6) while the Islanders are 17-12-0 on the season.

First-period goals by Anze Kopitar and Viktor Arvidsson 19 seconds apart enabled the Los Angeles Kings to double up the Montreal Canadiens 4-2 and improve their record to 15-11-4. Cole Caufield tallied his 16th goal of the season for the Canadiens (13-12-2) as they’ve dropped three of their last four contests.

The Ottawa Senators got third-period goals by Alex DeBrincat and Drake Batherson to hold off the Nashville Predators by a score of 3-2. The Senators improve to 11-14-2 while the Predators slide to 12-11-2.

SPORTSNET: Former Vancouver Canucks defenseman Kevin Bieksa still had more to say about former Boston Bruins captain Zdeno Chara claiming the Canucks were practicing passing around the Stanley Cup before Game 3 of the 2011 Cup Final between the two clubs. Chara made that claim recently on the “Games with Names” podcast.

Now a Hockey Night in Canada analyst, Bieksa previously told colleague Jeff Marek that the incident never happened nor did the Canucks contact the league to ask how many family members would be allowed on the ice when they won the Cup.

During Saturday’s HNiC telecast, Bieksa called Chara’s comments “one of the dumbest things we’ve ever heard.” He pointed to the fact that there was no record of this supposed incident despite the plethora of media coverage of that series.

Bieksa also noted that Chara seemed to walk back his comments during the podcast. He believed the former Bruins captain was showing a lack of respect toward the Canucks and their leaders at the time.

SPECTOR’S NOTE: Bieska made a valid point about the lack of substantiation of Chara’s claims. So far, there’s been no response from the former Bruins star.

THE SEATTLE TIMES: Kraken defenseman Jamie Oleksiak received a three-game suspension by the NHL department of player safety for a hit to the head of Washington Capitals defenseman Alexander Alexeyev.

NBC SPORTS CHICAGO: Blackhawks goaltender Petr Mrazek hopes to return to the lineup on Tuesday to face the Capitals. He’s missed the last three games with a minor groin injury.

THE SCORE: The Edmonton Oilers will host the Calgary Flames at the 2023 Heritage Classic.

THE HOCKEY NEWS: Former NHL player Chris Therien has released a book chronicling his life and career, including his struggle with alcoholism and his subsequent decade of sobriety.

← NHL Rumor Mill - December 10, 2022 Sunday NHL Rumor Roundup - December 11, 2022 →
We use cookies on our website to give you the most relevant experience by remembering your preferences and repeat visits. By clicking “Accept”, you consent to the use of ALL the cookies.
Do not sell my personal information.
Cookie SettingsAccept
Manage consent