The latest on the Canadiens and Lightning, top prospect Owen Power still leaning toward returning to university, the Kraken announces the hiring of two assistant coaches, the latest contract signings and more in today’s NHL morning coffee headlines.

MONTREAL GAZETTE: Expect the Canadiens to ice the same lineup in Game 5 as they did in their previous contest. That means Jake Evans will replace Jesperi Kotkaniemi again on the third line while Alexander Romanov and Brett Kulak will replace Erik Gustafsson and Jon Merrill on the third defense pairing. 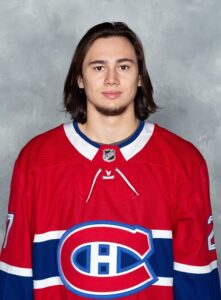 SPECTOR’S NOTE: That shouldn’t come as a surprise considering those changes contributed to their 3-2 victory in Game 4. Romanov scored an even-strength goal with an assist from Evans.

TAMPA BAY TIMES: Lightning defenseman Ryan McDonagh is enjoying perhaps the best postseason performance of his career. He’s set up several big goals, leads all postseason skaters with a plus-minus of plus-14, and is one of his club’s top shot blockers.

SPECTOR’S NOTE: McDonagh’s been overshadowed by teammates such as Nikita Kucherov, Brayden Points, Andrei Vasilevskiy and Victor Hedman. Nevertheless, he’s a big reason why the Lightning holds a 3-1 lead in this series over the Canadiens.

ESPN.COM: A league source told Greg Wyshynski there is “zero chance” Game 5 of the Stanley Cup Final will be postponed despite Tropical Storm Elsa bearing down on Tampa Bay. That assessment was made based on the forecast, though NHL deputy commissioner Bill Daly indicated they have “an amount of flexibility.”

SPECTOR’S NOTE: In other words, unless the storm’s impact proves far worse than anticipated, it’s game on tonight in Tampa Bay.

WGR 550: University of Michigan defenseman Owen Power is still leaning toward returning to university for one more season before making the jump to the NHL. Power is ranked as this year’s top prospect. He is expected to be selected by the Buffalo Sabres, who hold the first-overall pick.

SPECTOR’S NOTE: Some teams might prefer a prospect who could be ready to jump to the NHL right away. However, it’s unlikely Power will drop in this year’s draft order. Many highly-touted prospects need another year or two of seasoning before they’re ready for the big time.

THE SEATTLE TIMES: The Kraken yesterday announced the hirings of Kelly McFarland and Jay Leach as assistant coaches. McFarland will oversee the power-play unit and forwards while Leach will be in charge of the defensemen.

NORTHJERSEY.COM: The New Jersey Devils signed goaltender Scott Wedgewood to a one-year, two-way deal worth $825K at the NHL level.

NHL.COM: The Los Angeles Kings signed defenseman Christian Wolanin to a one-year, two-way contract worth $750K at the NHL level.

WINNIPEG SUN: The Jets yesterday signed center Dominic Toninato to a two-year contract worth $750K at the NHL level. It’s a two-way deal in the first season.

ARIZONA SPORTS: The Coyotes have hired Alan Hepple as their new director of pro scouting. He’s the former director of amateur scouting with the Colorado Avalanche.

← NHL Rumor Mill - July 6, 2021 NHL Rumor Mill - July 7, 2021 →
We use cookies on our website to give you the most relevant experience by remembering your preferences and repeat visits. By clicking “Accept”, you consent to the use of ALL the cookies.
Do not sell my personal information.
Cookie SettingsAccept
Manage consent