NHL.COM: The Columbus Blue Jackets honored former captain Rick Nash by retiring his No. 61 in a ceremony before their game with the Boston Bruins. The first overall pick of the 2002 NHL Draft, Nash spent nine seasons with the Jackets (2002-03 to 2011-12) and remains the franchise leader with 289 goals, 258 assists and 547 points. He was a co-winner of the Richard Trophy in 2004. 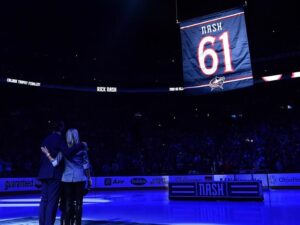 SPECTOR’S NOTE: A well-deserved honor for Nash. One wonders what heights he would’ve reached or how much better the Jackets would’ve been had management done a better job building around him during his tenure in Columbus.

The Jackets rallied on a game-tying goal by Jakub Voracek to force overtime and a shootout but fell 5-4 to the Bruins on David Pastrnak’s winning goal. The win kept the Bruins (72 points) three ahead of the Washington Capitals for the first wild-card spot in the Eastern Conference standings.

Speaking of the Capitals, three unanswered goals (two of them by Conor Sheary) lifted them to a 5-2 victory over the Seattle Kraken. Alex Ovechkin also scored to reach 764 career goals, putting him two behind Jaromir Jagr for third place on the all-time list. He finished the game with three points as the Capitals hold the second Eastern wild-card berth. Kraken captain Mark Giordano reached a milestone by skating in his 1,000th career NHL regular-season game.

Arizona Coyotes center Nick Schmaltz set a club record with a seven-point performance (two goals, five assists) to lead his club over the Ottawa Senators 8-5. It was a wild game that saw the Coyotes blow a 4-0 lead to fall behind 5-4 before rallying back for the win. Clayton Keller and Shayne Gostisbehere each had four points for the Coyotes. Thomas Chabot collected three assists and Parker Kelly tallied twice for the Senators.

Johnny Gaudreau scored in overtime and also had two assists as his Calgary Flames burned the league-leading Colorado Avalanche 4-3. Flames forwards Elias Lindholm and Matthew Tkachuk also each collected three points. Avalanche captain Gabriel Landeskog netted his 30th goal of the season. The Avs pulled goaltender Darcy Kuemper after he gave up three goals on 15 shots. The Flames (73 points) hold a six-point lead over the second-place Los Angeles Kings atop the Pacific Division. The Avs (85 points) hold a four-point lead over the Carolina Hurricanes in the overall standings.

Nashville Predators winger Michael McCarron had two goals and two assists, Roman Josi set up four goals and Juuse Saros had a 20-save shutout in an 8-0 drubbing of the San Jose Sharks. Forwards Matt Duchene and Matt Luff also scored two goals as the Predators (66 points) hold a one-point lead over the Dallas Stars for the first wild-card spot in the Western Conference.

SPECTOR’S NOTE: With the March 21 trade deadline just two weeks away, this loss may have put the final nail in the Sharks’ playoff hopes. Management could become sellers, generating increased speculation over the future of Tomas Hertl, who’s slated to become an unrestricted free agent in July.

Toronto Maple Leafs center Auston Matthews scored twice to take over the NHL goal-scoring lead with 39 goals but his club suffered a 6-4 loss to the Vancouver Canucks. Leafs captain John Tavares snapped a 14-game goalless streak. J.T. Miller, Brock Boeser and Bo Horvat were among six Canucks to finish the night with two points. With 62 points, the Canucks are three points behind the Dallas Stars for the final Western Conference wild-card spot. Toronto forward Wayne Simmonds skated in his 1,000th career regular-season NHL game. The Leafs sit third in the Atlantic Division with 74 points.

Montreal Canadiens center Nick Suzuki had a goal and two assists and Sam Montembeault kicked out 28 shots as their club upset the Edmonton Oilers 5-2. Cole Caufield and Brendan Gallagher each had a goal and an assist for the Canadiens, who’ve won seven of their last eight games and are 7-4-0 under interim coach Martin St. Louis. The Oilers remain one point behind the Dallas Stars for the final Western wild-card berth.

The New York Islanders got a 27-save performance by goaltender Ilya Sorokin to hold off the St. Louis Blues 2-1. Islanders center Brock Nelson scored what proved to be the game-winner. The Blues (70 points) hold a three-point lead over the Minnesota Wild for second place in the Central Division.

THE ORANGE COUNTY REGISTER: Anaheim Ducks general manager Pat Verbeek told his club’s season-ticket holders he’s working toward signing pending UFA defensemen Hampus Lindholm and Josh Manson and winger Rickard Rakell to contract extensions. However, he added he would look to trade them if he cannot get them under contract before the March 21 trade deadline.

SPECTOR’S NOTE: Verbeek mentioned having ongoing talks with the Lindholm camp. He didn’t mention the other two by name.

SPORTSNET: Former NHL superstar Jaromir Jagr will donate the proceeds from Kladno’s final Czech Extraliga regular-season game toward Ukrainian families in the Czech Republic following Russia’s invasion of Ukraine. Owner of the Kladno Knights, Jagr had the game moved to a bigger arena in Prague that holds over 17,000 seats.

← NHL Rumor Mill - March 5, 2022 Sunday NHL Rumor Roundup - March 6, 2022 →
We use cookies on our website to give you the most relevant experience by remembering your preferences and repeat visits. By clicking “Accept”, you consent to the use of ALL the cookies.
Do not sell my personal information.
Cookie SettingsAccept
Manage consent