Recaps of Monday’s games, the Hockey Hall of Fame Class of 2022 is inducted, the three stars of the week are revealed, and more in today’s NHL Morning Coffee Headlines.

NHL.COM: The St. Louis Blues held off the Colorado Avalanche 3-2 on a third-period power-play goal by Jordan Kyrou. Jordan Binnington stopped 45 shots while Robert Thomas had a goal and an assist for the Blues (6-8-0), who’ve now won three straight games. The Avalanche (8-5-1) got a 36-save effort from Alexandar Georgiev while Mikko Rantanen tallied a goal and collected an assist.

SPECTOR’S NOTE: Before the game, the Avalanche announced that Kurtis MacDermid would be sidelined for four-to-six weeks with a lower-body injury. They also placed sidelined forward Shane Bowers (upper body) on injured reserve. 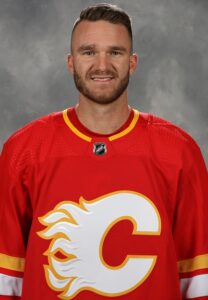 Calgary Flames winger Jonathan Huberdeau tallied his 200th career NHL goal as his club held on to nip the Los Angeles Kings 6-5 and improve their record to 7-6-2. Tyler Toffoli and Elias Lindholm each had a goal and two assists for the Flames while Arthur Kaliyev scored twice for the 10-7-1 Kings.

SPECTOR’S NOTE: Huberdeau was returning to action after missing the last three games with an injured foot. Coming off a career-best 115-point performance with the Florida Panthers in 2021-22, he’s having a slow start with his new club this season with seven points in 12 games.

Carolina Hurricanes goaltender Pyotr Kochetkov made 27 saves for his first career NHL shutout in a 3-0 victory over the Chicago Blackhawks. Jordan Staal and Jordan Martinook each had a goal and an assist for the Hurricanes as they improved their record to 10-5-1 while the Blackhawks dropped to 6-6-3.

The New York Islanders got a 36-save performance from Semyon Varlamov to double up the Ottawa Senators 4-2. Mathew Barzal collected two assists for the 11-6-0 Islanders. Claude Giroux and Tim Stutzle each had two points for the Senators as they fall to 5-9-1. Giroux extended his points streak to nine games.

SPECTOR’S NOTE: Barzal is tied with Brock Nelson as the Islanders’ leading scorer this season with 18 points. He has yet to score a goal.

PHILLY HOCKEY NOW: Bill Clement and Al Morganti were inducted into the Hockey Hall of Fame for media excellence.

SPECTOR’S NOTE: The Jackets are also sitting at the bottom of the Eastern Conference standings with nine points in 14 games. This rash of injuries will only make it more difficult for this club to climb out of that increasingly deep hole.

TSN: The Toronto Maple Leafs announced defenseman Jake Muzzin is sidelined indefinitely with a cervical spine injury and will be re-evaluated in February. Fellow blueliner T.J. Brodie is expected to miss two weeks with an oblique injury.

SPECTOR’S NOTE: The absence of Muzzin and Brodie has some pundits suggesting general manager Kyle Dubas should make a trade to bolster their injury-ravaged blueline. I’ll have more about this in today’s NHL rumor mill.

SPECTOR’S NOTE: Chychrun’s been a fixture in the trade rumor mill for months. Expect the speculation to ramp up once he resumes playing.

WGR 550: Buffalo Sabres forward Jack Quinn will be sidelined this week with an undisclosed injury.

NHL.COM: New York Rangers winger Chris Kreider is tied for the NHL’s goal-scoring lead after tallying a hat trick in a 7-3 victory over the Arizona Coyotes. Kreider has reached a career-high 29 goals, tying him with Washington Capitals captain Alex Ovechkin atop this season’s leader board. Jacob Trouba also scored twice and Mika Zibanejad collected three assists as the Rangers remain atop the Metropolitan Division with 58 points. Rangers winger Kaapo Kakko missed this contest as he’s day-to-day with an upper-body injury. 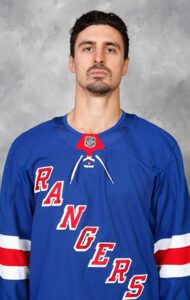 Speaking of Ovechkin, he scored two third-period goals to rally his club over the Ottawa Senators 3-2 on an overtime goal by Nicklas Backstrom. With 55 points, the Capitals maintain a five-point lead over the Boston Bruins for the first wild-card spot in the Eastern Conference.

Edmonton Oilers center Leon Draisaitl scored twice to sit one goal behind Ovechkin and Kreider as his club snapped a seven-game losing skid by dousing the Calgary Flames 5-3. The Oilers (40 points) sit two points behind the Flames, who remain two points back of the San Jose Sharks (44 points) for the final Western Conference wild-card berth. Thanks to his four-point performance, Draisaitl has tied Ovechkin for the points lead with 58. Oilers defenseman Tyson Barrie missed this game due to injuries suffered on Thursday against the Florida Panthers.

Speaking of the Sharks, they were on the receiving end of a 7-1 drubbing by the Tampa Bay Lightning. Ross Colton scored two goals while Steven Stamkos and Alex Killorn each had a goal and an assist while Brian Elliott made 27 saves. The Lightning and the Florida Panthers each have 61 points but the Panthers remain in first place in the overall standings with two games in hand. Lightning defenseman Cal Foote was fined $2,125.00 by the NHL department of player safety for cross-checking Anaheim Ducks forward Buddy Robinson on Friday.

Gabriel Landeskog’s overtime goal lifted the Colorado Avalanche over the Montreal Canadiens 3-2. The Avs extend their points streak to 12 games and their home winning streak to 15, sitting on top of the Western Conference with 59 points. Canadiens goaltender Cayden Primeau made 43 saves to keep this one close. Earlier in the day, the Canadiens placed Jonathan Drouin (upper body) on injured reserve and listed goalie Sam Montembault as day-to-day with a minor wrist injury.

Nashville Predators forward Matt Duchene scored two goals and collected an assist to lead his club over the Detroit Red Wings 4-1. Teammate Filip Forsberg tallied his 20th goal of the season and chipped in an assist as the Predators remain four points back of the Avs with 55 points.

The Toronto Maple Leafs picked up their first multi-goal win since Jan. 5 by dropping the New York Islanders 3-1, snapping the latter’s three-game win streak. Morgan Rielly had a goal and an assist and Petr Mrazek made 27 saves for the Leafs, who remains in third place in the Atlantic Division with 53 points.

New Jersey Devils forward Andreas Johnsson and defenseman Ryan Graves each had a goal and two assists in a 7-4 upset of the Carolina Hurricanes. Nathan Bastian also scored twice for the Devils as they overcame a 2-0 deficit. With 56 points, the Hurricanes sit two points behind the Rangers in second place in the Metropolitan Division.

An overtime goal by Marcus Foligno gave the Minnesota Wild a 4-3 win over the Chicago Blackhawks. Henrik Borgstrom scored twice for the Blackhawks. With 51 points, the Wild have a firm grip on the first wild-card spot in the Western Conference. The Blackhawks played without forward Jujhar Khaira and defenseman Riley Stillman as both were placed on injured reserve.

The Boston Bruins got a tie-breaking goal from David Pastrnak in a 3-2 victory over the Winnipeg Jets. Brad Marchand shook off an upper-body injury from his previous game to pick up an assist. Like the Oilers, the Jets are four points behind the Sharks in the chase for the Western Conference wild-card spot.

The Buffalo Sabres downed the Philadelphia Flyers 6-3 as the latter’s winless skid reached 11 games (0-8-3). Jeff Skinner, Tage Thompson and Peyton Krebs each scored twice for the Sabres while Claude Giroux tallied two goals for the Flyers. Earlier in the day, the Sabres announced rookie Jack Quinn will be sidelined four-to-six weeks with a lower-body injury.

THE HOCKEY NEWS: Jordan Subban was the target of a racist gesture during an ECHL game on Saturday. Jacksonville Iceman Jordan Panetta made monkey gestures at Subban, a defenseman for the South Carolina Stingrays, during an altercation leading to a fight. Subban is the younger brother of New Jersey Devils blueliner P.K. Subban, who shared a video of the incident on Twitter.

SPECTOR’S NOTE: There should be no place for racism in any level of hockey or society. However, this was the second episode this month of a black minor-league player being the target of racial taunting. On Friday, the American Hockey League suspended San Jose Barracudas forward Krystof Hrabik for 30 games after he made similar monkey gestures at Tucson Roadrunners Boko Imama on Jan. 12.

← NHL Rumor Mill - January 22, 2022 Sunday NHL Rumor Roundup - January 23, 2022 →
We use cookies on our website to give you the most relevant experience by remembering your preferences and repeat visits. By clicking “Accept”, you consent to the use of ALL the cookies.
Do not sell my personal information.
Cookie SettingsAccept
Manage consent