The Rangers advance to the Eastern Conference Finals, plus the latest on the Lightning, Oilers, Avalanche and more in today’s NHL morning coffee headlines.

NHL.COM: The New York Rangers are heading to the Eastern Conference Finals after eliminating the Carolina Hurricanes with a 6-2 victory in Game 7 of their second-round series. Chris Kreider scored twice, Mika Zibanejad collected three assists and Igor Shesterkin made 37 saves for the Rangers. 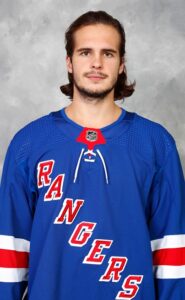 Vincent Trocheck and Max Domi replied for the Hurricanes, who lost goaltender Antti Raanta and winger Seth Jarvis to injuries. Raanta left the game in the second period with a lower-body injury after stretching out to make a save. Jarvis was sidelined with an upper-body injury in the first period by a hit from Rangers defenseman Jacob Trouba.

SPECTOR’S NOTE: This was a dominant performance by the Rangers, who took an early 2-0 lead and never looked back. They earned this thanks to outstanding goaltending from Shesterkin, solid special teams play, timely offense from their leading scorers and a playoff-leading 236 blocked shots.

The Hurricanes entered this series with starting goaltender Frederik Andersen sidelined since mid-April by a lower-body injury. However, his absence was just one of several reasons why they failed to defeat the Rangers. They couldn’t win on the road, their power-play sputtered and their leading scorers such as Sebastian Aho, Andrei Svechnikov and Teuvo Teravainen failed to deliver.

THE ATHLETIC’s Daniel Nugent-Bowman reports Leon Draisaitl and Darnell Nurse skated with their Edmonton Oilers teammates in practice on Monday. It was Draisaitl’s first practice since suffering an injury in Game 6 of the first round while Nurse had skipped most recent practices.

SPECTOR’S NOTE: Draisaitl is believed to have a high-ankle sprain but you’d never know it by his performance. He set an NHL record in the second round by tallying the most assists (15) in a single playoff round.

EDMONTON JOURNAL: Speaking of the Oilers, an NHL insider said there was no truth to a report claiming the club had some “COVID-related travel issues” getting to Colorado on Sunday. The Oilers face the Avalanche in Game 1 of the Western Conference Finals on Tuesday.

THE DENVER POST: On the eve of the Western Conference Finals, Avalanche general manager Joe Sakic is earning praise for sticking with center Nazem Kadri and head coach Jared Bednar. Kadri earned suspensions in recent postseasons while Bednar faced criticism for his inability to get his club beyond the second round.

NHL.COM: Brandon Hagel missed his third straight practice on Sunday. However, Tampa Bay Lightning coach Jon Cooper believes the forward will be ready for Game 1 against the Rangers on Wednesday.

THE ATHLETIC’s Michael Russo reports Minnesota Wild captain Jared Spurgeon had core muscle surgery and will be back at full strength in six weeks. Winger Mats Zuccarello is facing similar surgery plus he had a leg fracture that will heal with rest.

CALGARY SUN: Flames goaltender Jacob Markstrom denied his struggles against the Oilers in the second round were injury-related.

VANCOUVER HOCKEY NOW: The Vancouver Canucks have added Mike Komisarek and Mikael Samuelsson to their player development department. Meanwhile, Henrik and Daniel Sedin will be working daily with the Canucks’ young players in Vancouver and with their AHL affiliate in Abbotsford.

← NHL Rumor Mill - May 30, 2022 NHL Rumor Mill - May 31, 2022 →
We use cookies on our website to give you the most relevant experience by remembering your preferences and repeat visits. By clicking “Accept”, you consent to the use of ALL the cookies.
Do not sell my personal information.
Cookie SettingsAccept
Manage consent