The following is the list of players traded on March 21, 2022. The trade deadline is 3 pm ET. Check in regularly as this list will be updated throughout today until the last trades are officially announced.

Vegas Golden Knights trade forward Evgenii Dadonov to the Anaheim Ducks in exchange for the LTIR contract of Ryan Kesler, defenseman John Moore and a conditional second-round pick in 2023 or 2024.

Edmonton Oilers acquire forward Derick Brassard from the Philadelphia Flyers in exchange for a fourth-round pick in 2023.

Calgary Flames acquire center Ryan Carpenter from the Chicago Blackhawks in exchange for a fifth-round draft pick in 2024.

The Pittsburgh Penguins acquire winger Rickard Rakell from the Anaheim Ducks in exchange for forwards Zach Aston-Reese and Dominik Simon, a 2022 second-round pick and a prospect.

The Rangers also acquire forward Tyler Motte from the Vancouver Canucks in exchange for a 2023 fourth-rounder.

Detroit Red Wings ship forward Vladislav Namestnikov to the Dallas Stars in exchange for a fourth-round pick in 2024.

Colorado Avalanche acquires forward Andrew Cogliano from the San Jose Sharks in exchange for a 2024 fifth-rounder.

The Washington Capitals acquire Johan Larsson from the Arizona Coyotes in exchange for a 2023 third-round pick.

Ottawa Senators trade Zach Sanford to the Winnipeg Jets for a 2022 fifth-round pick.

Edmonton Oilers acquire defenseman Brett Kulak from the Montreal Canadiens in exchange for defenseman William Lagesson and a conditional second-round pick in 2022 or 2023.

Boston Bruins trade winger Zach Senyshyn and a fifth-rounder in the 2022 draft to the Ottawa Senators for defenseman Josh Brown and a seventh-rounder in 2022.

The New York Rangers acquire defenseman Justin Braun from the Philadelphia Flyers for a third-round pick in 2023.

Chicago Blackhawks trade goaltender Marc-Andre Fleury to the Minnesota Wild in exchange for a conditional 2022 second-round draft pick that becomes a first-rounder if the Wild reach the Western Conference Final.

The Seattle Kraken trade forward Marcus Johansson to the Washington Capitals in exchange for forward Daniel Sprong, a 2022-fourth-round pick and a 2023 sixth-rounder.

The Winnipeg Jets trade center Nathan Smith and Bryan Little’s LTIR contract to the Arizona Coyotes in exchange for a 2022 fourth-round pick.

The latest on Oliver Ekman-Larsson and an update on the Capitals in today’s NHL rumor mill.

ARIZONA REPUBLIC: Jose M. Romero reports Coyotes captain Oliver Ekman-Larsson has returned to Arizona and hopes to join a group of his teammates on Monday working out at Gila River Arena. He maintains he’s “really glad” he’s a Coyote, which is why he signed his eight-year contract with the club. However, the 29-year-old defenseman acknowledged it’s been a difficult offseason after he was part of trade talks between the Coyotes and the Boston Bruins and Vancouver Canucks. 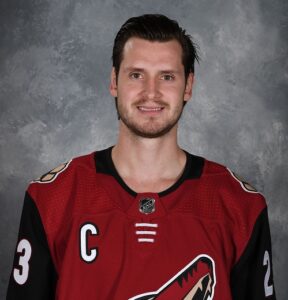 Ekman-Larsson has a full no-movement clause but only agreed to waive it for the Bruins and Canucks. The Coyotes’ efforts to trade him fell through when a deal couldn’t be reached with either club before his self-imposed deadline on Oct. 9.

The long-time Coyotes blueliner said he understood this was a business decision. He denied any suggestion of tension with new general manager Bill Armstrong and doesn’t expect any strain going forward with their relationship.

AZCOYOTESINSIDER: Craig Morgan reports Ekman-Larsson explained why he choose Boston and Vancouver. He said the Bruins had an interest in him before he signed his current contract. He also spent a lot of time in Boston when he played in Portland, Maine during the 2012-13 lockout. His Swedish friends enjoyed playing and living in Vancouver plus his agent lives there. He also believes the Canucks have a promising young team.

Asked if he envisioned the Coyotes approaching him again about a trade, Ekman-Larsson left that up to Armstrong. He maintains he’s happy in Arizona but would deal with that issue if it came up again. He repeated he has no issue with what recently went down but expects at some point he’ll sit down with management and talk it through. Ekman-Larsson defended Armstrong, pointing out he arrived at a tough time for the club and had a job to do.

SPECTOR’S NOTE: A deal couldn’t be reached sending Ekman-Larsson to Boston or Vancouver because Armstrong understandably set a high asking price. It’s also believed the Coyotes weren’t willing to absorb part of the blueliner’s $8.25 million annual salary-cap hit. Perhaps the Bruins or Canucks would’ve taken on his full cap hit during a normal offseason, especially if the salary cap rose to between $84 million and $88 million as projected before the pandemic.

Ekman-Larsson’s name could resurface in the rumor mill if the Coyotes struggle during the coming season or if ownership wants to shed more salary. However, his no-movement clause will continue to give him full control over the situation. His annual average value through 2026-27 will also make him very difficult to move, especially if the Coyotes remain reluctant to pick up part of it to facilitate a trade.

NBC SPORTS WASHINGTON: J.J. Regan recently examined the Capitals’ options to bring in a third-line winger. He expects Daniel Sprong is the strongest candidate if they look to promote from within.

If the Capitals look to external options, their limited cap space (less than $1.5 million) means they could afford two players at barely over the league’s minimum salary. If they can free up some cap room, free agents such as Conor Sheary, Andreas Athanasiou and Melker Karlsson could be realistic possibilities.

SPECTOR’S NOTE: Regan believes the Capitals could move a defenseman, such as Nick Jensen, to a club with salary-cap space (such as Detroit or New Jersey) to free up room to add via free agency. The Wings need blueline depth but they could also squeeze the Capitals to include a sweetener.

Pietrangelo told Dreger contract discussions haven’t gone the way both sides were hoping. Unless something changes, it’s in the best interest of both sides for him to test the market.

Dreger colleague Pierre LeBrun wondered if the Blues would be willing to trade Pietrangelo’s rights before the UFA market opens on Oct. 9. “If so, what is the draft pick that gets it done?”

SPECTOR’S NOTE: The Athletic’s Jeremy Rutherford reports sources said a recent Blues offer to Pietrangelo had an annual average value of $7.7 million, though it’s now believed to be $8 million. He’s willing to accept less than market value (believed to be $9 million AAV) but is concerned over the structure of the deal, such as term, no-movement clause, and a signing bonus in the final year of a long-term deal, guaranteeing Pietrangelo a cash payout in the event of a buyout.

While there’s still time for the two sides to work things out, it appears the Blues are willing to let Pietrangelo walk if he gets a better offer via the open market. The door could be open to both sides resuming discussions if he doesn’t find anything to his liking. Nevertheless, if I were a Blues fan, I’d be resigned to Pietrangelo playing with another club next season.

SPECTOR’S NOTE: It appears retirement beckons for Koivu. The wear and tear of his long career caught up with him over the last two seasons as he slid down the Wild depth chart, skating on the fourth line. I think we expected the Wild would part ways with Koivu, but it’s still a little sad to see the end of an era and the potential end of a long, productive career.

TSN: Tampa Bay Lightning general manager Julien BriseBois remains hopeful Steven Stamkos could return at some point during the Stanley Cup Final. However, the Lightning captain won’t suit up for Game 1 tonight against the Dallas Stars.

SPECTOR’S NOTE: Stamkos has been sidelined with what’s believed to be a lower-body injury suffered during Phase 2 training in July. He’s resumed skating but there’s still no timetable for his return.

TRIBLIVE.COM: The Pittsburgh Penguins re-signed center Jared McCann to a two-year contract worth an annual average salary of $2.94 million. McCann was the subject of recent trade rumors but this new contract turns down the heat on that speculation.

SPECTOR’S NOTE: McCann could still be traded now that he’s carrying an affordable contract for the next two years. Nevertheless, I think Penguins GM Jim Rutherford re-signed him with the intent of keeping him in the lineup for at least next season.

TSN: The Washington Capitals re-signed winger Daniel Sprong to a two-year contract worth an AAV of $725K.

Cap Friendly published a list of upcoming important dates on the NHL calendar. Among the noteworthy timings:

The deadline for club-elected salary arbitration is Oct. 5.

The deadline for player-elected arbitration is 5 pm ET on Oct. 10.

Arbitration hearings will be held from Oct. 20 to Nov. 8.

TSN: Rick Westhead cited executives from several NHL sponsors telling him talks for 2020-21 deals presuppose teams will at least play in bubbles of some sort. The NHL and NHLPA hope to avoid this but cross-border travel and crowds at indoor arenas are unlikely for many months. Westhead said NHL team sponsorships in many markets hang in the balance.

SPECTOR’S NOTE: Money will ultimately decide when the NHL returns to action next season and in what form. The league and the PA might not have much choice but to return under some sort of bubble.

There’s been talk of seeing purely divisional play, or having all the Canadian teams play each other while the American-based clubs would face each other based on regions, followed by more bubble hockey for the 2021 Stanley Cup playoffs. The league could be closely watching how MLB and the NFL have handled travel during their respective schedules.

← Laviolette Latest To Find A Ride On NHL Coaching Carousel NHL Rumor Mill - September 19, 2020 →
We use cookies on our website to give you the most relevant experience by remembering your preferences and repeat visits. By clicking “Accept”, you consent to the use of ALL the cookies.
Do not sell my personal information.
Cookie SettingsAccept
Manage consent