NHL.COM: The NHL yesterday formally announced its’ return-to-play plan with a 24-team tournament to determine the 2020 Stanley Cup champion. the format was approved by a 29-2 vote by the NHL Players’ Association executive board on Friday. 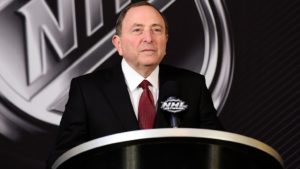 These rounds will be played at two hub cities, one for each conference. The candidates for those cities include Chicago, Columbus, Dallas, Edmonton, Las Vegas, Los Angeles, Minneapolis/St. Paul, Pittsburgh, Toronto, and Vancouver.

League commissioner Gary Bettman said the final selection of the hub cities and when play can begin depends on COVID-19 conditions, testing ability, and government regulations. For example, Edmonton, Toronto, and Vancouver would be ruled out as hub cities if the Canadian government maintains its 14-day self-quarantine for non-essential border travel.

SPECTOR’S NOTE: TSN’s Frank Seravalli reports Las Vegas is believed to be a “near lock” as one of the hub cities. NHL.com’s Mike Zeisberger reported the U.S. Acting Director of Homeland Security has signed an order indicating professional athletes are considered essential workers. According to TSN’s Rick Westhead, however, the Canadian government has yet to determine if it’ll follow suit.

Bettman said it’s not required to have Eastern Conference clubs play in an Eastern hub or Western Conference teams to play in a Western hub. Deputy commissioner Bill Daly indicated the league might not allow a team to play in its own city to avoid the appearance of competitive advantage.

Training camps could open in mid-July as part of Phase 3 return-to-play plan. Bettman estimated the games could begin sometime this summer and carry on into early autumn. Teams will be limited to 50 personnel in their traveling parties and will strictly limit the number of support staff.

Bettman stressed the health and safety of the players, coaches, essential support staff, and communities remain the priority.

SPORTSNET: Bettman said the 2019-20 regular season is considered to be over for purposes of record-keeping and awards.

SPECTOR’S NOTE: That means the Boston Bruins are the winners of the 2019-20 Presidents’ Trophy. Edmonton Oilers forward Leon Draisaitl has won the Art Ross Trophy (becoming the first German-born player to do so), while Washington’s Alex Ovechkin and Boston’s David Pastrnak will share the Maurice “Rocket” Richard Trophy with the most goals this season (48).

SPECTOR’S NOTE: The league’s formal announcement of the 24-team tournament generated plenty of buzz among hockey fans. While this is a step toward returning to action, plenty of potential obstacles must be overcome before this tournament takes place. As TSN’s Pierre LeBrun tweeted, the league and the PA continue to negotiate about the location of the hub cities, testing, protocols, etc.

Responding to questions from fans on Sportsnet, Bettman suggested the start of the 2020-21 season could be pushed ahead to November or December.

THE HOCKEY NEWS: Ken Campbell reports this plan will cost the league tens of millions of dollars and involve 30,000 COVID-19 tests. Bettman indicated the league’s medical advisors said that by the time they’re doing that testing over the summer, it will be a relatively insignificant number compared to the tests that will be available.

The league stated a single positive test or several isolated positives during tournament won’t shut things down, but weren’t as optimistic in the event of a team suffering a COVID-19 outbreak.

SPECTOR’S NOTE: One or two players with positive tests can be isolated, but I’m assuming that means their teammates would have to go into self-quarantine. If not, there’s a real risk of the virus spreading quickly among their teammates and to other clubs they’ve faced in the tournament.

THE ATHLETIC‘s Michael Russo reported via Twitter that NHL deputy commissioner Bill Daly said the league’s position remains no contracts can be signed for 2019-20. However, the issues remain to be resolved with the NHLPA.

NHL.COM: The league also announced the protocol for the 2020 NHL Draft, with the first phase slated for June 26. That phase will consist of three drawings and include the seven teams (Detroit Red Wings, Ottawa Senators, San Jose Sharks, Los Angeles Kings, Anaheim Ducks, New Jersey Devils, and Buffalo Sabres) that didn’t qualify for the 24-team playoff tournament, plus eight placeholder spots for the eight clubs that fail to advance in the tournament’s play-in round. The lottery odds for those clubs were determined by their points percentage in the final standings

Qualifying Round Team A — 6.0 percent

Qualifying Round Team B — 5.0 percent

THE HOCKEY NEWS: Ryan Kennedy provides a detailed breakdown of how the draft lottery will unfold through each phase to determine the final placements. He noted this format will eliminate the possibility of the Stanley Cup champion also winning the draft lottery.

SPECTOR’S NOTE: Depending on the outcome of the play-in round, determining those placeholders spots can get complicated. Kennedy’s breakdown provides a clearer picture.

SPECTOR’S NOTE: Rather curious timing by Pegula, given all the news coming down from the league yesterday. Coincidence? You make the call!

LAS VEGAS SUN: The Golden Knights will unveil the new name and logo of its AHL affiliate on Thursday. Earlier this season, they purchase the AHL’s San Antonio Rampage with the intent of moving it to Henderson, Nevada.

← The NHL's Buyout Barometer - Pacific Division (Part I) NHL Rumor Mill - May 27, 2020 →
We use cookies on our website to give you the most relevant experience by remembering your preferences and repeat visits. By clicking “Accept”, you consent to the use of ALL the cookies.
Do not sell my personal information.
Cookie SettingsAccept
Manage consent