WGR 550: The Buffalo Sabres avoided salary arbitration with Victor Olofsson by reaching an agreement on a two-year, $6.1 million contract. 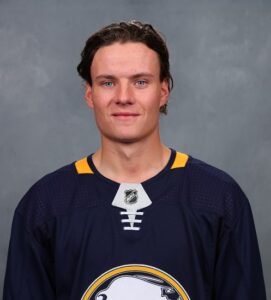 SPECTOR’S NOTE: Olofsson had an impressive first full NHL season, scoring 20 goals and 42 points in 54 games to become a finalist for the 2019-20 Calder Trophy as rookie of the year. This is a reasonable raise for the 25-year-old winger, who becomes a restricted free agent with arbitration rights in 2022.

THE DALLAS MORNING NEWS: The Stars removed the interim tag from head coach Rick Bowness’ job title as he signed a two-year contract.

SPECTOR’S NOTE: No surprise. Bowness took over behind the bench on Dec. 10 and guided the Stars to the 2020 Stanley Cup Final.

FLORIDA HOCKEY NOW: The NHL has cleared former Florida Panthers general manager Dale Tallon of wrongdoing following an investigation into whether he used racially-charged language during the club’s time in the Toronto playoff bubble.

SPECTOR’S NOTE: Tallon was reportedly being considered for an advisory role with the Pittsburgh Penguins. This could clear the way for his new job but is being greeted with criticism by some observers.

ARIZONA SPORTS: The Coyotes are renouncing the rights of 2020 fourth-round pick, Mitchell Miller, after reports emerged of his bullying and racially taunting an African-American classmate with developmental issues four years ago.

THE DENVER POST: Former Colorado Avalanche winger Colin Wilson discussed his struggle with obsessive-compulsive disorder, as well as drug and alcohol abuse, in The Players’ Tribune on Thursday. The 31-year-old center also indicated hip injuries may have brought his NHL career to a close. He’s now sober, receiving therapy and back in New England preparing for the next step in his life.

SPECTOR’S NOTE: Wilson spent 11 seasons in the NHL with the Nashville Predators and the Avalanche, tallying 113 goals and 286 points in 632 games. Best wishes to him in his future endeavors.

THE NEWS & OBSERVER: Carolina Hurricanes owner Tom Dundon has an option to sell the club back to former owner Peter Karmanos. While the coronavirus is affecting the NHL’s economics, Dundon doesn’t believe it will affect his ownership of the club. “I don’t have any intention of not owning the team,” he said.

TAMPA BAY TIMES: The Lightning officially announced the signings of Patrick Maroon and Luke Schenn. The pair signed new contracts with the Lightning on Oct. 9.

SPECTOR’S NOTE: A wise decision by the Blackhawks. This will allow Dach to get in some meaningful playing time under a quarantine bubble in Edmonton as he and the Hawks await the start of the 2020-21 season.

TVA SPORTS: The Montreal Canadiens have been refused access to their practice facility in Brossard by public health officials. The facility is within a COVID-19 red zone.

SPORTSNET: Travis Roy, who was left paralyzed in his first college hockey game with Boston University in 1995, has died at age 45. He went on to become an advocate for spinal cord injury survivors both in and outside the sports world, raising over $9 million through the Travis Roy Foundation. He also worked in tandem with the Boston Bruins, with team president Cam Neely and former Bruins defenseman Ray Bourque among those extending condolences.

SPECTOR’S NOTE: My sympathies to Roy’s family, friends, and former teammates. Neely put it best when he called him “the ultimate symbol of determination and courage.”