The latest on Anthony Cirelli, Ilya Samsonov and Alexis Lafreniere plus updates on return-to-play and more in today’s NHL morning coffee headlines.

TSN: Pierre LeBrun reports it doesn’t appear a new contract is imminent for Anthony Cirelli. The 23-year-old Tampa Bay Lightning center is a restricted free agent. Earlier this week, the Lightning re-signed defenseman Mikhail Sergachev but Cirelli’s agent said there’s nothing new to report on a new deal for his client. 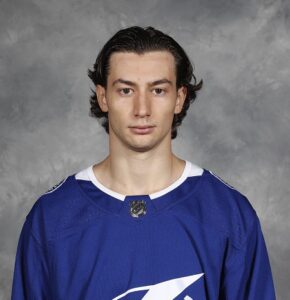 SPECTOR’S NOTE: Cap Friendly indicates the Lightning are above the $81.5 million salary cap by $1.904 million following the Sergachev signing. The Bolts are allowed to exceed the cap by 10 percent during the offseason but perhaps general manager Julien BriseBois intends to shed salary before signing Cirelli and fellow RFA Erik Cernak.

Given the uncertainty over the start of the 2020-21 NHL season, BriseBois has plenty of time to get Cirelli and Cernak under contract and shed some salary to become cap compliant when the season finally begins.

NBC SPORTS WASHINGTON: Capitals professional development coach Olaf Kolzig isn’t worried about Ilya Samsonov replacing the departed Braden Holtby as the club’s starting goaltender. “I think Sammy has the ability to be like (Andrei) Vasilevskiy,” said Kolzig, referring to the Tampa Bay Lightning’s starter. Vasilevskiy won the Vezina Trophy in 2019 and backstopped the Bolts to the 2020 Stanley Cup.

SPECTOR’S NOTE: As a former Vezina Trophy winner, Kolzig would know if Samsonov has the potential to play as well as Vasilevskiy. The young netminder showed considerable promise as a rookie last season, often outplaying Holtby before an injury kept him out of the 2020 playoffs. He’ll be under considerable pressure this season but that should be alleviated by offseason signing Henrik Lundqvist.

Lafreniere was selected first overall by the New York Rangers in the 2020 NHL Draft. The 19-year-old winger is currently in New York and would face quarantine restrictions to return to Canada but Salmond said there’s an ongoing discussion about the winger’s status.

OTTAWA SUN: Bruce Garrioch cites a league executive having “no doubt we’re going to have a season” but he’s uncertain when that will happen. Garrioch believes an agreement to start the season on Jan. 1 will have to be made by no later than Tuesday (Dec. 1).

With negotiations between the NHL and NHL Players Association stalled, a mid-January or early February start appears more likely. The betting in league circles is Feb. 1.

SPECTOR’S NOTE: Garrioch also said the word is the players told NHLPA executive director Donald Fehr not to pick up the phone or budge on their position not to agree to the league’s requests for increases to the escrow and salary deferral rates.

Given the importance of ensuring the league doesn’t slip off the sports radar with other leagues ongoing or planning their new seasons, the feeling is the league and the PA will eventually work out a return-to-play plan.

It could be both sides are regrouping and working on workable proposals. We’ll find out soon enough.

SI.COM/THE HOCKEY NEWS: Ken Campbell recently wondered if the NHL could legally attempt to leverage the threat of suspending or ceasing the 2020-21 season if their requests aren’t met by the players because of the effects of COVID-19 upon hockey-related revenue.

SPECTOR’S NOTE: So far there’s no indication the NHL is going down that road. It’ll be interesting to see if they’ll use that hardball gambit.