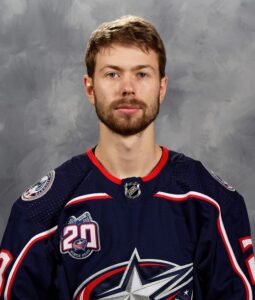 NHL.COM: The Columbus Blue Jackets held off the Chicago Blackhawks 2-1 to extend their points streak to seven games (4-0-3). Oliver Bjorkstrand had a goal and an assist while Joonas Korpisalo made 31 saves for the win. Dylan Strome replied for the Blackhawks.

SPORTSNET: Speaking of the Blue Jackets, winger Patrik Laine arrived in Columbus on Friday and could debut with the Jackets on Tuesday. Laine and Jack Roslovic were traded to Columbus last Saturday by the Winnipeg Jets in exchange for Pierre-Luc Dubois and a draft pick.

TWINCITIES.COM: Minnesota Wild winger Kevin Fiala received a three-game suspension for a dangerous hit on Los Angeles Kings defenseman Matt Roy on Thursday. Speaking of the Wild, Marco Rossi has returned to his native Austria to rehab an upper-body injury. The ninth overall pick in the 2020 draft, the 19-year-old center is expected to rejoin the Wild in six weeks.

LAS VEGAS SUN: The Golden Knights’ next two games (Monday and Wednesday) against the San Jose Sharks have been postponed. Four members of the Golden Knights, including three coaches, are currently in isolation after one coach tested positive for COVID-19.

CALGARY SUN: The Flames held a players-only meeting following their 4-2 loss on Thursday to the Montreal Canadiens to air their frustrations stemming from their third straight defeat.

SPECTOR’S NOTE: The Flames just haven’t looked good in their last couple of games. They’ve been dominated physically and on the scoreboard. It’ll be interesting to see what kind of effort they put forth in tonight’s rematch against the Habs.

← Several NHL Teams Off To Surprisingly Poor Starts to 2021 Season NHL Rumor Mill - January 30, 2021 →
We use cookies on our website to give you the most relevant experience by remembering your preferences and repeat visits. By clicking “Accept”, you consent to the use of ALL the cookies.
Do not sell my personal information.
Cookie SettingsAccept
Manage consent