NHL.COM: Darcy Kuemper made 24 saves for the shutout while Clayton Keller scored the only goal as the Arizona Coyotes blanked the St. Louis Blues 1-0. The Coyotes took four of the seven games in this series. Blues defenseman Torey Krug left the game after the second period with an upper-body injury and is listed as day-to-day.

The New York Islanders defeated the Buffalo Sabres 3-1. Jean-Gabriel Pageau scored and Josh Bailey collected two assists for the Islanders while Victor Olofsson tallied for Buffalo. It was the Sabres’ first game since their schedule was paused after Jan. 31 due to COVID-19.

SPECTOR’S NOTE: The long layoff adversely affected the Sabres’ performance in this contest. They had nine shot attempts in the third period but none of them reached the net. 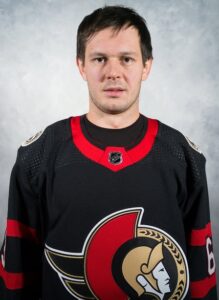 Evgenii Dadonov scored the tying and winning goals as the Ottawa Senators roared back from a 5-1 deficit to upset the Toronto Maple Leafs 6-5 in overtime. Auston Matthews scored twice for the Leafs while teammate Joe Thornton had a goal and an assist in his return after missing 10 games to a rib injury.

SPECTOR’S NOTE: The Senators deserve credit for not giving up after falling behind by four goals. However, the Leafs were their own worst enemies as complacency seemed to set in after they took that big lead.

Speaking of the Leafs, they acquired forward Alex Galchenyuk from the Carolina Hurricanes for forward Egor Korshkov and David Warsofsky.

SPECTOR’S NOTE: Galchenyuk is on the move just two days after being acquired by the Hurricanes from the Senators. He’s now on his seventh team since 2018 and is expected to join the Leafs’ farm club because he already cleared waivers before the trade went down. He also doesn’t have to quarantine because he was still in Ottawa preparing to head to Carolina when this deal went down.

The Leafs were in the market for a depth forward. Acquiring Galchenyuk is an affordable move to bring in some additional experience.

And speaking of the Hurricanes, they tallied six unanswered goals to defeat the Columbus Blue Jackets 7-3. Teuvo Teravainen scored twice and set up two others, Brock McGinn had a goal and three assists, Jordan Staal netted two goals and James Reimer made 37 saves for the win.

The Florida Panthers held off the Tampa Bay Lightning 6-4, handing the latter their first home loss of the season. Aleksander Barkov, Jonathan Huberdeau and Anton Stralman each had a goal and an assist for the Panthers. Alexander Volkov tallied twice for the Lightning.

Dominik Kubalik scored twice, including the winner in overtime as the Chicago Blackhawks edged the Detroit Red Wings 3-2. The Wings overcame a two-goal deficit to force the extra frame.

The Winnipeg Jets downed the Edmonton Oilers 6-5 as Blake Wheeler tallied the winning goal in the third period. Jets center Mark Scheifele had a goal and two assists. Ryan Nugent-Hopkins and Alex Chiasson each scored twice for the Oilers as they overcame 4-2 and 5-3 deficits.

Johnny Gaudreau’s overtime goal lifted the Calgary Flames to a 4-3 victory over the Vancouver Canucks. The Flames rallied back from a 2-0 deficit to take a 3-2 lead until Brock Boeser force overtime with a shorthanded goal late in the third period.

San Jose Sharks captain Logan Couture had a goal and an assist to lead his club over the Anaheim Ducks 3-2.

THE DALLAS MORNING NEWS: The Stars postponed their game last night against the Nashville Predators at the request of Dallas Mayor Eric Johnson as a severe winter storm left hundreds of thousands of Dallas residents without power.

NBC SPORTS PHILADELPHIA: The Flyers canceled practice on Monday at the request of the NHL as a measure of caution. The club has seven players on the COVID-19 protocol list. They are still scheduled to practice today. They’ve been shut down for a week now.

MONTREAL GAZETTE: Canadiens general manager Marc Bergevin believes prospect forward Cole Caufield will turn pro at the conclusion of his college season with the University of Wisconsin. It’s uncertain if Caufield will play any games with the Canadiens this season.

SPECTOR’S NOTE: Caufield’s offensive exploits in college play and in the 2021 World Juniors have generated plenty of anticipation among Habs fans. Time will tell if he can successfully make the jump into the NHL.

THE ATLANTIC: NHL Hall-of-Fame goaltender Ken Dryden believes oversized upper-body goaltending equipment has changed the game and not for the better. He feels expanding the net is a viable solution.

SPECTOR’S NOTE: Dryden makes a compelling case. He points to golf-club technology making championship courses longer, how a lighter soccer ball now makes it possible for players to curve or drop shots around a goaltender, and how the three-point shot eventually improved scoring in basketball.

← Crosby, Malkin and Letang Dominate The NHL Rumor Mill NHL Rumor Mill - February 16, 2021 →
We use cookies on our website to give you the most relevant experience by remembering your preferences and repeat visits. By clicking “Accept”, you consent to the use of ALL the cookies.
Do not sell my personal information.
Cookie SettingsAccept
Manage consent