​Recaps of Sunday’s action plus the latest injury and COVID-19 updates and more in today’s NHL morning coffee headlines. 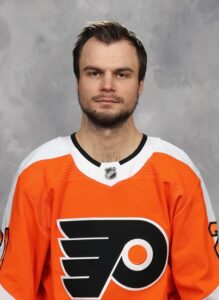 Before the game, Flyers defenseman Travis Sanheim entered the league’s COVID-19 protocol list, resulting in rapid testing of both clubs. Once those tests returned negative the game was allowed to proceed.

SPECTOR’S NOTE: The NHL and NHLPA are reportedly looking into implementing more rapid testing league-wide in hope of flattening the rising COVID-19 curve among the teams. The Buffalo Sabres, Colorado Avalanche, Minnesota Wild and New Jersey Devils are currently sidelined because a number of their players are on the COVID protocol list.

A third-period goal by Chandler Stephenson lifted the Vegas Golden Knights to a 4-3 win over the Los Angeles Kings. Stephenson scored twice while teammate Zach Whitecloud tallied his first NHL regulation goal. Kings’ rookie Jaret Anderson-Dolan netted his first career NHL goal. The Kings played without forward Martin Frk as he was unavailable due to a lower-body injury.

Alex DeBrincat scored twice, including the winner in overtime, as the Chicago Blackhawks edged the Dallas Stars 2-1. Patrick Kane had two assists and Malcolm Subban kicked out 31 shots for the win.

The Detroit Red Wings upset the Florida Panthers 4-1, handing the latter their first regulation loss of the season. Wings forward Givani Smith had a Gordie Howe hat trick with a goal, an assist and a fight with Panthers defenseman Aaron Ekblad following Smith’s hit to the head of Panthers’ blueliner MacKenzie Weegar. No word if Smith will face supplemental discipline. Wings forward Anthony Mantha was a healthy scratch from this contest.

A controversial offside call in the second period overshadowed the Carolina Hurricanes 6-5 win over the Columbus Blue Jackets. Officials overruled an offside challenge by the Jackets on a goal by Hurricanes center Vincent Trocheck and assessed the Jackets a bench penalty. The officials subsequently decided the play was offside after all and waved off the final 45 seconds of the Hurricanes power-play but still allowed Trocheck’s goal to stand.

TORONTO SUN: Maple Leafs winger Wayne Simmonds could be sidelined up to six weeks after getting hit in the hand with a shot during Saturday’s game against the Vancouver Canucks.

NHL.COM: Former NHL forward Ralph Backstrom died Sunday at age 83 following a lengthy illness. Backstrom won the Calder Memorial Trophy as rookie of the year in 1959 and won six Stanley Cups with the Montreal Canadiens. He tallied 278 goals and 639 points in 1, 032 NHL games with the Canadiens, Los Angeles Kings and Chicago Blackhawks, as well as 214 points in 234 games in the WHA.

Backstrom went on to coach the University of Denver, scouted for the St. Louis Blues and founded the Colorado Eagles, now the AHL farm club of the Colorado Avalanche.

SPECTOR’S NOTE: Backstrom lived a full, productive life in hockey and the game is better for it. My condolences to his family, friends, teammates and associates.

← NHL Up and Down the Boards: Canucks, Rangers Sink on Odds to Make Playoffs NHL Rumor Mill - February 8, 2021 →
We use cookies on our website to give you the most relevant experience by remembering your preferences and repeat visits. By clicking “Accept”, you consent to the use of ALL the cookies.
Do not sell my personal information.
Cookie SettingsAccept
Manage consent