Recaps of Monday’s action, the three stars of the week, and more in today’s NHL morning coffee headlines.

NHL.COM: A third-period goal by Vincent Trocheck set the stage for Martin Necas’ overtime winner as the Carolina Hurricanes edged the Florida Panthers 3-2. Necas also collected two assists while Alex Nedeljkovic made 44 saves for the win. The Panthers (30 points) remain in first place in the Discover Central Division, one point ahead of the Hurricanes and Tampa Bay Lightning. They also played with winger Anthony Duclair as he’s sidelined at least a week with a lower-body injury suffered during Saturday’s game against the Hurricanes.

Ottawa Senators winger Drake Batherson scored twice to extend his franchise-record goal streak to six games in a 5-1 upset of the Calgary Flames. Matt Murray got the win with 27 saves and Senators rookie Tim Stutzle picked up two assists. The Flames (22 points) have dropped three of their last four games and remain one point behind the fourth-place Montreal Canadiens in the Scotia North Division.

Vancouver Canucks goaltender Thatcher Demko made 27 saves for his first NHL shutout in a 4-0 upset of the Winnipeg Jets. Elias Pettersson and Nate Schmidt each had a goal and an assist for the Canucks, who moved to within three points of the Canadiens. 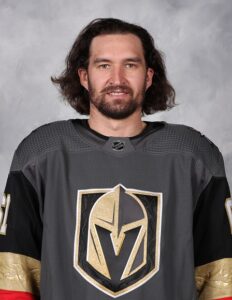 The St. Louis Blues got two goals and an assist from Zach Sanford to hold off the Anaheim Ducks 5-4. The Blues sit one point behind the Golden Knights. Ducks forward Isac Lundestrom collected his first career NHL hat trick.

Toronto Maple Leafs goaltender Michael Hutchinson kicked out 31 shots in a 3-0 shutout over the Edmonton Oilers. William Nylander and Morgan Rielly each had a goal and an assist for the Leafs, who blanked the Oilers for the second straight game.

The San Jose Sharks scored six unanswered goals in a 6-2 drubbing of the Colorado Avalanche. Evander Kane had a goal and two assists while Timo Meier collected three helpers. The Avalanche played without defenseman Cale Makar, who returned to Denver for further evaluation regarding an upper-body injury suffered during Friday’s game against the Arizona Coyotes.

SPECTOR’S NOTE: Tortorella’s future has become the topic of speculation as the Jackets has dropped five straight games and seven of their last eight, leaving them seven points behind the fourth-place Chicago Blackhawks in the Central.

SPECTOR’S NOTE: Stalock revealed he was diagnosed with the heart condition myocarditis after testing positive for COVID-19 last November. He received clearance to resume training in mid-January but was unable to regain his spot on the Wild’s goalie tandem. As he’s crossing the US-Canada border he must quarantine for two weeks before joining the Oilers.

THE PROVINCE: Former NHL forward Todd Bertuzzi was arrested for drunk driving in Michigan over the weekend.

← NHL Trade Speculation Swirling About Struggling Predators NHL Rumor Mill - March 2, 2021 →
We use cookies on our website to give you the most relevant experience by remembering your preferences and repeat visits. By clicking “Accept”, you consent to the use of ALL the cookies.
Do not sell my personal information.
Cookie SettingsAccept
Manage consent