​Recaps of Saturday’s action, the Rangers and Kings make a trade, and more in today’s NHL morning coffee headlines.

NHL.COM: Third-period goals by Nick Ritchie and Craig Smith lifted the Boston Bruins over the Buffalo Sabres 3-2, handing the latter their 17th straight loss. Boston winger Brad Marchand missed the game when he was placed on the NHL’s COVID-19 protocol list. With 39 points, the Bruins hold a three-point lead over the Philadelphia Flyers for fourth place in the MassMutual East Division.

SPECTOR’S NOTE: The Sabres were actually the better team through the first two periods but couldn’t close the deal in the third.

The Flyers ended a four-game losing skid by edging the New York Rangers 2-1. Samuel Morin’s first NHL goal was the game-winner. The Rangers (34 points) sit two points behind the Flyers and five back of the Bruins.

Max Pacioretty’s overtime goal gave the Vegas Golden Knights a 3-2 victory over the Colorado Avalanche. The Golden Knights (47 points) hold a one-point lead for first place in the Honda West Division over the Avalanche, who extended their points streak to 10 games.

SPECTOR’S NOTE: This was the day’s most entertaining game and perhaps a preview of a playoff series between these two clubs later this spring.

Detroit Red Wings goaltender Calvin Pickard made 21 saves for his first win since 2018 by backstopping his club to a 3-1 victory over the Columbus Blue Jackets. Dylan Larkin collected two assists and Robby Fabbri tallied what proved to be the game-winner as the Wings snapped a three-game losing streak. The loss leaves the Blue Jackets (34 points) one point behind the fifth-place Nashville Predators and three back of the fourth-place Chicago Blackhawks in the Discover Central Division. 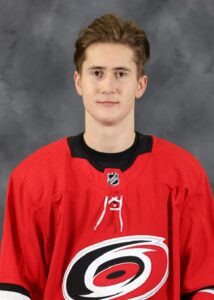 Martin Necas scored twice and added two assists to lead the Carolina Hurricanes over the Tampa Bay Lightning 4-3. Teammate Dougie Hamilton picked up an assist to extend his team points record to 14 games. Pat Maroon had a goal and an assist for Tampa Bay. With 49 points, the Hurricanes sit one back of the first-place Lightning in the Central Division.

An overtime goal by Auston Matthews lifted the Toronto Maple Leafs over the Edmonton Oilers by a score of 4-3. The Leafs overcame a 3-1 deficit on third-period tallies from John Tavares and William Nylander. Leon Draisaitl had a goal and two assists for the Oilers while Connor McDavid collected two assists. The win gives the Leafs (46 points) a two-point lead over the Winnipeg Jets for first place in the Scotia North Division. The Oilers sit one behind the Jets.

A hat trick by Bryan Rust powered the Pittsburgh Penguins to a 6-3 win over the New York Islanders, bringing goalie Ilya Sorokin’s eight-game win streak to an end. Sidney Crosby had a goal and an assist for the Penguins (46 points), who move within two points of the second-place Islanders in the MassMutual East.

The Nashville Predators picked up their fourth straight victory by downing the Chicago Blackhawks 3-1. Luke Kunin collected two assists in his first game since being sidelined on Feb. 28 with a lower-body injury. Blackhawks center Kirby Dach was held pointless in his season debut after missing 34 games with a fractured wrist. The win moves the Predators (35 points) just two points behind the fourth-place Blackhawks in the Central.

SPECTOR’S NOTE: Nashville defenseman Mattias Ekholm and forward Mikael Granlund are considered among the players most likely to move by the April 12 trade deadline. That could change, however, if the Predators overtake the Blackhawks.

Aaron Ekblad scored the game-winner as the Florida Panthers edged the Dallas Stars 4-3 in overtime. Ekblad tallied earlier in the frame but that goal was overturned on an offside review. Carter Verhaeghe had a hat trick for the Panthers (46 points), who remain three points back of the second-place Hurricanes in the Central. The Stars (31 points) sit six points behind the fourth-place Blackhawks but hold four games in hand.

The Arizona Coyotes got a natural hat trick from Phil Kessel and a 34-save shutout performance from Adin Hill to blank the San Jose Sharks 4-0. The Coyotes have won three straight and move into a tie with the St. Louis Blues with 37 points in the West Division. The Blues, however, hold fourth place with a game in hand.

SPECTOR’S NOTE: The Coyotes were expected to become sellers at the April 12 trade deadline. That will change if they stay in the thick of the West Division playoff race.

Third-period goals by Andrew Mangiapane and Sam Bennett enable the Calgary Flames to double up the Winnipeg Jets 4-2 and snap a four-game losing skid. Calgary winger Johnny Gaudreau collected an assist in his 500th career NHL game. The Flames (35 points) move two points behind the fourth-place Montreal Canadiens in the North Division.

SPECTOR’S NOTE: Gaudreau showed a lot of energy in this game after being publicly called out by head coach Darryl Sutter before this contest.

NEW YORK POST: The New York Rangers traded winger Brendan Lemieux to the Los Angeles Kings in exchange for a fourth-round pick in the 2021 NHL Draft.

SPECTOR’S NOTE: The Post reports the Rangers were looking to free up a roster spot, perhaps for promising Vitali Kravtsov after he recently joined the team following a stellar season in the KHL. Lemieux, 25, will bring some grit to the rebuilding Kings’ checking lines.

TSN: Boston Bruins defenseman John Moore will be sidelined five-to-six months after electing to undergo hip arthroscopy and labral repair on March 22. He appeared in just five games this season.

MONTREAL GAZETTE: The Canadiens signed high-touted US college prospect forward Cole Caufield to a three-year entry-level contract. He will start his pro career with the Habs’ AHL affiliate in Laval. Caufield is a finalist for the Hobey Baker Award.