​The Avalanche clinch a playoff berth, a big night for Jakub Vrana, and more in today’s NHL morning coffee headlines.

NHL.COM: The Colorado Avalanche are the second team to secure a playoff spot by doubling up the St. Louis Blue 4-2. Andre Burakovsky scored twice and Nathan MacKinnon collected three assists for the Avalanche, who were playing their first game since their schedule was postponed by a COVID-19 outbreak last week. They sit two points behind the first-place Vegas Golden Knights in the Honda West Division. Jaden Schwartz scored both goals for the Blues (44 points), who remain one point behind the fourth-place Arizona Coyotes.

SPECTOR’S NOTE: Jared Bednar surpassed Bob Hartley as the Avalanche’s longest-tenured head coach with his 360th game. He’s now in his fifth season in that role and has done a magnificent job coaching this former bottom-feeding club into a Stanley Cup contender.

Two shorthanded goals by Sebastian Aho carried the Carolina Hurricanes to a 4-2 win over the Florida Panthers. Carolina’s Martin Necas picked up three assists while Florida captain Aleksander Barkov scored twice. The Hurricanes sit in first place in the Discover Central Division with 67 points, two up on the second-place Panthers. They also played without defenseman Brady Skjei as he remains sidelined indefinitely by a concussion.

The Tampa Bay Lightning defeated the Columbus Blue Jackets 3-1 to sit one point back of the Panthers. Blake Coleman scored twice and Ondrej Palat netted the game-winner. 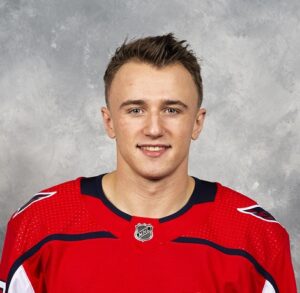 Detroit Red Wings forward Jakub Vrana scored four goals to lead his club over the Dallas Stars 7-3. Thomas Greiss made 43 saves for the win. The Stars (50 points) remain two points behind the fourth-place Nashville Predators in the Central. The Wings played without captain Dylan Larkin (upper-body injury) and announced Tyler Bertuzzi is done for the season with an upper-body injury.

Auston Matthews tallied his 34th goal of the season as the Toronto Maple Leafs downed the Winnipeg Jets 5-3. Mitch Marner scored twice and Nick Foligno collected an assist in his debut with the Leafs. Mark Scheifele had two points for the Jets, who lost center Adam Lowry following a headshot from Leafs winger Alex Galchenyuk. The Leafs played without defenseman Zach Bogosian, who’s sidelined for more than a week with an undisclosed injury.

SPECTOR’S NOTE: With 63 points, the Leafs now hold a six-point lead over the Jets for first place in the Scotia North Division.

Shootout goals by Nicklas Backstrom and Evgeny Kuznetsov gave the Washington Capitals a 1-0 victory over the New York Islanders. Ilya Samsonov made 26 saves for his second shutout of the season. The Capitals (64 points) hold a one-point lead over the Islanders and Pittsburgh Penguins for the top spot in the MassMutual East Division.

Speaking of the Penguins, Sidney Crosby, Bryan Rust, Kasperi Kapanen and Teddy Blueger each had a goal and an assist in a 5-1 win over the New Jersey Devils, Kapanen returned to action after missing 13 games with a lower-body injury. The Penguins hold second place over the Islanders with 30 wins.

The Boston Bruins picked up their sixth straight win by beating the Buffalo Sabres 5-1. David Pastrnak and Brad Marchand each had a goal and an assist and Jeremy Swayman kicked out 29 shots. The Bruins sit in fourth place in the East Division with 60 points, three behind the Islanders and eight up on the New York Rangers.

Two power-play goals by James van Riemsdyk powered the Philadelphia Flyers to a 3-2 victory over the Rangers. Brian Elliott made 33 saves for the Flyers (49 points), who sit three points back of the fifth-place Rangers in the East Division.

Matt Murray had a 31-save shutout as the Ottawa Senators blanked the Vancouver Canucks 3-0. Drake Batherson had a goal and an assist as the Senators have won four of their last five games.

SPECTOR’S NOTE: Hartman accepted a slight pay cut from his currently $1.9 million AAV for the security of an extra year. Cap Friendly indicates the signing leaves the Wild with $59.6 million invested in 13 players for 2021-22.

TSN: Only four players were on the NHL’s COVID-19 list yesterday. Three of them were the Avalanche’s Joonas Donskoi, Philipp Grubauer and Mikko Rantanen. The fourth was the Devils’ P.K. Subban.

Frank Seravalli reports the NHL and NHLPA have given the International Olympic Committee until the end of May for a financial commitment for the 2022 Winter Olympics because they need to set their schedule for next season.

THE SEATTLE TIMES: The Seattle Kraken are being sued by Seattle’s Kraken Lounge for $3.5 million. The lawsuit alleges the risk of irreparable harm to their brand name due to the team’s name choice and plans to open the Kraken Bar & Grill at their planned training facility.

← NHL North Division: Canada's Three Way Battle NHL Rumor Mill - April 23, 2021 →
We use cookies on our website to give you the most relevant experience by remembering your preferences and repeat visits. By clicking “Accept”, you consent to the use of ALL the cookies.
Do not sell my personal information.
Cookie SettingsAccept
Manage consent