NHL.COM: The Calgary Flames kept their fading playoff hopes alive by doubling up the Montreal Canadiens 4-2. Sean Monahan scored the winning goal and collected two assists as the Flames (43 points) sit six points behind the fourth-place Canadiens in the Scotia North Division. Flames winger Josh Leivo missed the game after landing on the NHL’s COVID-19 protocol list while Canadiens forward Jonathan Drouin was sidelined by an illness unrelated to COVID-19.

SPECTOR’S NOTE: It remains to be seen if Leivo has the coronavirus or if this was a false positive. The rest of the Flames and their staff tested negative. They must sweep the next two games against Montreal to have a realistic chance of staying in the postseason chase. 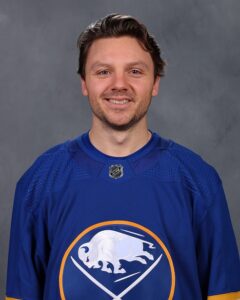 Sam Reinhart tallied a hat trick and goaltender Ukko-Pekka Luukkonen made 36 saves in his NHL debut as the Buffalo Sabres upset the Boston Bruins 6-4. Boston captain Patrice Bergeron missed the game with a suspected lower-body injury. The Bruins hold fourth place in the MassMutual East Division with 60 points.

The New York Rangers gained some ground on Boston with a 4-1 win over the Philadelphia Flyers. Pavel Buchnevich and Alexis Lafreniere each had a goal and an assist to give the Rangers 54 points, putting them six back of the Bruins.

A two-goal performance by rookie Kirill Kaprizov carried the Minnesota Wild to a 4-2 victory over the Los Angeles Kings. Cam Talbot kicked out 40 shots for the win as the Wild (63 points) move within three points of the second-place Colorado Avalanche in the Honda West Division. The Kings (40 points) remain five points behind the fourth-place Arizona Coyotes.

SPECTOR’S NOTE: Kaprizov leads all NHL rookies with 21 goals and 40 points. He’s played a key role in the Wild’s solid performance and is the favorite to win the Calder Memorial Trophy this season.

Nashville Predators goaltender Juuse Saros made 29 saves backstopping his club over the Chicago Blackhawks 3-1. The Predators sit in fourth place in the Discover Central Division with 54 points, sitting four up on the Dallas Stars and five ahead of the Blackhawks.

THE DETROIT NEWS: Red Wings captain Dylan Larkin will miss the remainder of the regular season with an upper-body injury. He’s currently their leading scorer with 23 points in 44 games.

THE ORANGE COUNTY REGISTER: Anaheim Ducks winger Jakob Silfverberg underwent season-ending hip surgery and is expected to be sidelined for four-to-six months. He could miss the start of training camp in September.

TSN: New Jersey Devils defenseman P.K. Subban took to social media Friday to confirm he’s dealing with COVID-19. He said the coronavirus “hit me pretty hard” but expects to be “back in the mix soon.” He thanked his supporters for their well-wishes, telling them to take care of themselves.

THE WASHINGTON POST: Capitals captain Alex Ovechkin is listed as day-to-day with a lower-body injury. He could miss today’s game against the New York Islanders.

THE DALLAS MORNING NEWS: Stars head coach Rick Bowness is hopeful Tyler Seguin will make a return to play next week after being sidelined since the fall by hip surgery. However, he maintained he won’t rush the center’s decision to return.

TSN: Leafs defenseman Zach Bogosian is out for four weeks with an injured shoulder.

YAHOO! SPORTS: WWE executive Nick Khan said it’s his company’s belief that the partnership between NBC and the NHL could end following this season. The remarks came in response to a question over whether the shuttering of NBCSN might create scheduling conflicts between WWE and the NHL on USA Network.

The NHL’s contract with NBC expires at the end of this season. ESPN has a new deal in place with the league for most of its US broadcast coverage. There’s speculation Disney, ESPN’s parent company, is in the process of working out a deal for the entire NHL slate.

SPECTOR’S NOTE: There was talk of the NHL making a deal with NBC or another media company like Fox Sports or Turner Sports to split its coverage with ESPN. That could no longer be the case if Khan’s remarks are anything to go by.

← What Next For The Anaheim Ducks? NHL Rumor Mill - April 24, 2021 →
We use cookies on our website to give you the most relevant experience by remembering your preferences and repeat visits. By clicking “Accept”, you consent to the use of ALL the cookies.
Do not sell my personal information.
Cookie SettingsAccept
Manage consent