The Canadiens clinch the last postseason spot in the North Division, the opening day of the 2021 Stanley Cup Playoffs is revealed, Jack Eichel talks about his season and the state of the Sabres, and much more in today’s NHL morning coffee headlines.

NHL.COM: The Montreal Canadiens clinched the final playoff berth in the Scotia North Division in a 4-3 overtime loss to the Edmonton Oilers. An overtime goal by Connor McDavid gave the Oilers the win after Canadiens winger Artturi Lehkonen forced overtime with the game-tying goal in the third period.

SPECTOR’S NOTE: The Canadiens are expected to face the Toronto Maple Leafs in the opening round. However, they could meet the Oilers if they win their final game of the season and the Winnipeg Jets drop their final two games in regulation. The Jets sit in third place with 59 points, one up on the Canadiens.

Speaking of the Jets, they dropped a 3-1 decision to the Vancouver Canucks. Jonas Hoglander scored twice for Vancouver.

A 36-save performance by Philipp Grubauer carried the Colorado Avalanche to a 2-1 victory over the Vegas Golden Knights. J.T. Compher snapped a 1-1 tie in the third period. With 78 points, Colorado sits two behind first-place Vegas in the Honda West Division. The Golden Knights (39 wins) have one game left while the Avs have two.

SPECTOR’S NOTE: Whoever tops the West will win the Presidents’ Trophy for this season’s best record.

An overtime goal by Justin Faulk gave the St. Louis Blues a 2-1 win over the Los Angeles Kings The Blues will face the Golden Knights or Avalanche in the first round of the playoffs.

The Carolina Hurricanes chances of winning the Presidents’ Trophy ended in a 5-0 loss to the Nashville Predators. Pekka Rinne picked up the shutout with 30 saves while Matt Duchene scored two goals. The Hurricanes finish the season in first place in the Discover Central Division with 36 wins and 80 points while the Predators finish in fourth place.

SPECTOR’S NOTE: The Hurricanes and Predators will face off against each other in the opening round of the 2021 Stanley Cup playoffs beginning this weekend.

A 30-save shutout performance by Chris Driedger carried the Florida Panthers over the Tampa Bay Lightning 4-0. Keith Yandle had an assist for his 600th career NHL points. Lightning forwards Mathieu Joseph, Gemel Smith and Daniel Walcott played together on what is believed to be the first all-Black forward line in NHL history.

SPECTOR’S NOTE: With the win, the Panthers clinched second place in the Central and home-ice advantage over the Lightning in their first-round series starting this weekend. 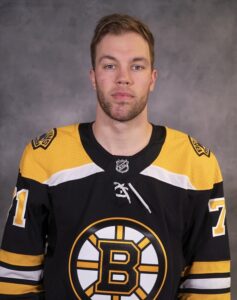 Taylor Hall’s overtime goal lifted the Boston Bruins past the New York Islanders 3-2. Bruins winger Ondrej Kase left the game with an upper-body injury. The win clinched third place in the MassMutual East Division for the Bruins, who’ll face the second-place Washington Capitals in the opening round of the postseason with Game 1 on Saturday. The Islanders will face the Pittsburgh Penguins.

SPECTOR’S NOTE: Kase was playing in his first game since suffering a concussion in January. An update on his condition could be made today.

The Dallas Stars nipped the Chicago Blackhawks 5-4 on an overtime goal by Jason Robertson.

Two goals by Joel Farabee gave the Philadelphia Flyers a 4-2 victory over the New Jersey Devils.

NHL.COM: Deputy commissioner Bill Daly said the North Division playoffs could begin once all the regular-season games in that division are concluded. Several games earlier in the season involving the Vancouver Canucks were postponed due to COVID-19. Their final regular-season game is May 19.

SPECTOR’S NOTE: That would allow those Canadian clubs some extra rest while giving some of their banged-up players more time to recover before the playoffs begin.

WGR 550: Jack Eichel expressed his displeasure over the way the Buffalo Sabres handled the herniated disk in his neck during an end-of-season media conference call on Monday. He suffered that season-ending injury in early March. Asked why he hasn’t yet undergone surgery, he said it’s a contractual issue, saying the club decides what he can or cannot do to treat an injury.

The Sabres captain also revealed he suffered a sprained ankle during the season, fractured a rib several weeks before training camp and had a lingering abdominal injury from last season.

Eichel dodged the question of whether he’ll ask for a trade but admitted he has a lot of thinking to do regarding his future. He said he has to do what best for him and the Sabres must do what’s best for the organization.

SPECTOR’S NOTE: Eichel’s comments (which you can read in full by following the above link) raised eyebrows around the league. It sounds like he may have played his final game with the Sabres. I’ll have more in the Rumors section.

TSN: Columbus Blue Jackets general manager Jarmo Kekalainen said yesterday it’s “self-explanatory” that Patrik Laine remains a key part of the club’s future. The winger is a restricted free agent this summer. However, his rights remain under the Jackets’ contract until 2022-23.

SPECTOR’S NOTE: Laine’s contract status prompted speculation suggesting he could be traded if he and the Blue Jackets failed to reach an agreement on a new deal. The winger yesterday confirmed his wish to remain with the Jackets.

THE SCORE: San Jose Sharks winger Evander Kane said filing for bankruptcy was a big weight off his shoulders. He considers it a relief that he didn’t have to hide his financial troubles anymore, calling it the end of that chapter of his life. Kane said the birth of his daughter 10 months ago helped him mature and accept responsibility for his actions.

SPECTOR’ S NOTE: That relief was reflected in Kane’s play this season. He’s the Sharks’ leading scorer with 22 goals and 49 points in 55 games.

ESPN is reportedly adding Ray Ferraro and Brian Boucher as NHL analysts starting next season. The network declined to comment.