The Lightning, Wild and Islanders win the first games of their opening-round series, plus the latest on Carey Price, Brendan Gallagher, Nathan MacKinnon and more in today’s NHL morning coffee headlines.

NHL.COM: Tampa Bay Lightning center Brayden Point scored the game-tying and winning goals as his club squeaked past the Florida Panthers 5-4 in Game 1 of their opening-round series. Tampa Bay winger Nikita Kucherov tallied two power-play goals in his first game after missing the regular season recovering from offseason hip surgery. Jonathan Huberdeau had a goal and two assists for the Panthers. Game 2 of this series is on Tuesday evening. 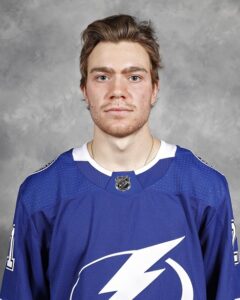 SPECTOR’S NOTE: This was the best game of the playoffs thus far. It could end up being the best series of the first round if the Lightning and Panthers maintain the pace this set in Game 1. Kucherov showed no signs of rust in his first game of this season. The Panthers must play a more disciplined style. Three of the Bolts’ goals came with the man advantage.

An overtime goal by Joel Eriksson Ek gave the Minnesota Wild a 1-0 victory over the Vegas Golden Knights in Game 1 of their first-round series. Cam Talbot kicked out 42 shots for the shutout while Vegas’ Marc-Andre Fleury made 29 saves. They meet again in Game 2 on Tuesday.

SPECTOR’S NOTE: This was an entertaining game despite the low score. Both clubs had plenty of good scoring opportunities but the goaltenders were superb. The Golden Knights were without sniper Max Pacioretty. He’s been sidelined since May 1 by an undisclosed injury.

The New York Islanders nipped the Pittsburgh Penguins 4-3 on an overtime goal by Kyle Palmieri, who also opened the scoring. Ilya Sorokin picked up the first playoff victory of his career with a 39-save performance while teammate Jean-Gabriel Pageau had a three-point game. Game 2 of this series is also on Tuesday night.

SPECTOR’S NOTE: Pittsburgh goaltender Tristan Jarry was shaky in this contest. Every goal beat him high to the glove side. Penguins center Evgeni Malkin missed the game with an undisclosed injury. Sorokin got the start as Isles starter Semyon Varlamov was out with a lower-body injury.

An overtime goal by Elias Lindholm lifted the Calgary Flames over the Vancouver Canucks 6-5 after the Canucks overcame a 5-1 deficit to force overtime. Brock Boeser scored twice for the Canucks. Both clubs face each other two more times before their regular-season schedule is complete.

SPORTSNET: Montreal Canadiens goaltender Carey Price and winger Brendan Gallagher have been assigned to the club’s AHL affiliate in Laval on a long-term injury conditioning stint. Both are expected to be in the Canadiens lineup for Game 1 of their first-round series against the Toronto Maple Leafs on Thursday.

SPECTOR’S NOTE: Some Canadiens followers freaked out on social media over this decision because they’re afraid one or both could get hurt playing a meaningless AHL game. However, the Habs want both players to get in some game action before Game 1 due to their long absences from the lineup.

THE DENVER POST: Colorado Avalanche center Nathan MacKinnon will be in the lineup when his club faces off tonight against the St. Louis Blues in the opening game of their first-round series. He missed four of the Avs’ final five regular-season contests with minor injuries.

NBC SPORTS WASHINGTON: Evgeny Kuznetsov and Ilya Samsonov returned to the ice yesterday for the Capitals optional practice. Both had been on the COVID-19 protocol list since May 4.

SPECTOR’S NOTE: It’s unclear who will back up Craig Anderson for Game 2 tonight against the Boston Bruins. Anderson replaced Vitek Vanecek in Game 1 when the latter suffered a lower-body injury. Kuznetsov, meanwhile, could be several days away from rejoining the lineup.

TORONTO SUN: Jack Campbell will get the start for the Maple Leafs when they faced the Canadiens on Thursday. Winger Zach Hyman is also expected to return to action after being sidelined since April 18 by a sprained knee.

THE ATHLETIC: John Tortorella reportedly wanted to step down last offseason as head coach of the Columbus Blue Jackets. One of the reasons he stayed was because Nick Foligno convinced him to return for one last season.

← NHL Betting Notebook: Lightning Favored in First-Ever Playoff Clash with Florida NHL Rumor Mill - May 17, 2021 →
We use cookies on our website to give you the most relevant experience by remembering your preferences and repeat visits. By clicking “Accept”, you consent to the use of ALL the cookies.
Do not sell my personal information.
Cookie SettingsAccept
Manage consent