The Lightning and Islanders advance to the second round, the Wild force Game 7 with the Golden Knights, and more in today’s NHL morning coffee headlines

NHL.COM: The Tampa Bay Lightning have advanced to the second round of the 2021 Stanley Cup playoffs with a 4-0 victory over the Florida Panthers, winning their best-of-seven series in six games. Lightning goaltender Andrei Vasilevskiy made 29 saves for the shutout, team captain Steven Stamkos had a goal and an assist while Pat Maroon tallied what proved to be the game-winning goal. Lightning forward Barclay Goodrow returned to action after missing six games with an upper-body injury. 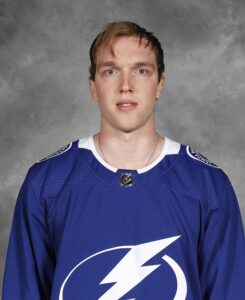 SPECTOR’S NOTE: This ends the most entertaining series of the opening round. The Panthers were a worthy opponent but were overwhelmed by the depth and experience of the defending Stanley Cup champions.

Three-point performances by Brock Nelson and Anthony Beauvillier carried the New York Islanders to a 5-3 victory over the Pittsburgh Penguins to eliminate the latter in six games. Ilya Sorokin kicked out 34 shots for the Isles, who go on to face the Boston Bruins in the second round.

SPECTOR’S NOTE: The Islanders earned this victory with their hard work, smothering defense and timely scoring. Pittsburgh goalie Tristan Jarry’s shaky performance in this game and throughout that series raises questions about the depth in the Penguins crease. I’ll have more in today’s NHL Rumor Mill.

A 23-save shutout by Cam Talbot gave the Minnesota Wild a 3-0 victory over the Vegas Golden Knights in Game 6 of their first-round series. Ryan Hartman, Kevin Fiala and Nick Bjugstad scored in the third period to force a seventh and deciding game back in Las Vegas on Friday.

SPECTOR’S NOTE: The Wild have seized the momentum from the Golden Knights by overcoming a 3-1 series deficit to force a winner-take-all Game 7.

TSN: Maple Leafs captain John Tavares joined his teammates at their practice facility yesterday to get “re-acclimated” with his teammates, said Leafs coach Sheldon Keefe. Tavares suffered a concussion and knee injury in Game 1 of their current series with the Montreal Canadiens. He’s expected to be sidelined for at least two weeks.

Leafs center Nick Foligno remains day-to-day with a lower-body injury and is questionable for Game 5 tonight. Canadiens forwards Artturi Lehkonen (upper-body) and Jake Evans (undisclosed) did not travel with their teammates to Toronto for Game 5.

THE DENVER POST: Colorado Avalanche defenseman Bo Byram has returned to the lineup after being sidelined by a concussion since March 25.

EDMONTON JOURNAL: Defenseman Ethan Bear and the Oilers spoke out yesterday after the 23-year-old was the target of racist attacks on social media following the club’s first-round elimination earlier this week.

SPECTOR’S NOTE: Bear was singled out after a Game 4 turnover resulted in a goal by the Winnipeg Jets. It’s one thing to criticize his play but attacking his Cree heritage was a despicable move by racist cowards.

NBC SPORTS BAY AREA: The San Jose Sharks have agreed not to sue Google or the City of San Jose after the franchise and the tech company reached a settlement over the latter’s plans to expand into downtown San Jose. The Sharks were concerned over the potential effect the expansion would have on parking at SAP Center.

← NHL Playoffs: Vegas Golden Knights vs Minnesota Wild Game 6 NHL Rumor Mill - May 27, 2021 →
We use cookies on our website to give you the most relevant experience by remembering your preferences and repeat visits. By clicking “Accept”, you consent to the use of ALL the cookies.
Do not sell my personal information.
Cookie SettingsAccept
Manage consent