​The remaining rounds of the 2021 draft are completed, plus the latest on Alex Ovechkin, Seth Jones and more in today’s NHL morning coffee headlines.

NHL.COM: The remaining rounds (2 through 7) of the 2021 NHL Draft were completed yesterday. It was something of a family affair as the sons of several former NHL players were selected, continuing a trend that began during the first round when Tyler Boucher (son of Brian Boucher) was chosen by the Ottawa Senators (10th overall), Cole Sillinger (son of Mike Sillinger) was selected by the Columbus Blue Jackets (12th overall), and Chase Stillman (Cory Stillman’s son) was taken at 29th overall. 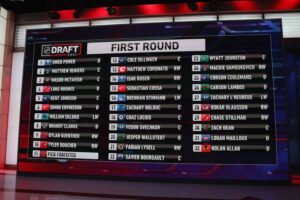 With the 2021 NHL Draft completed, some are gazing ahead to next year’s draft. OHL center Shane Wright of the Kingston Frontenacs could be the first-overall pick.

SPECTOR’S NOTE: Saturday also saw the Philadelphia Flyers trade Jakub Voracek to the Columbus Blue Jackets for Cam Atkinson, the Buffalo Sabres ship Sam Reinhart to the Florida Panthers, and the Colorado Avalanche re-sign Cale Makar to a six-year contract extension. You can get my take on those moves by following this link.

THE WASHINGTON POST: Capitals general manager Brian MacLellan remains confident of getting team captain Alex Ovechkin under contract before the unrestricted free agent market opens on Wednesday, July 28. “I think both parties want the same goal, and I think we will get it done by then,” he said.

SPECTOR’S NOTE: I anticipate Ovechkin will ink a three-year deal with the Capitals worth an annual average value of $9 million.

CHICAGO SUN-TIMES: Seth Jones said he’s up for the challenge of meeting the high expectations he’ll face playing for the Blackhawks. The 26-year-old defenseman was traded on Friday to Chicago by the Columbus Blue Jackets and signed an eight-year, $76 million contract.

SPECTOR’S NOTE: The Blackhawks have been criticized for the trade and the contract signing because of Jones’ declining stats over the past two or three years. Hawks management is betting Jones’ stats will improve playing on a team with more scoring punch where he’ll get an opportunity to play a less restrictive style than what he faced in recent years.

THE SCORE: After being chosen by the Montreal Canadiens in the first round on Friday, defenseman Logan Mailloux addressed the November incident in Sweden that led him to renounce himself from the draft before being chosen.

Mailloux read from a prepared statement acknowledging he took a photo of a young woman engaged in a consensual sex act and sharing it without her knowledge among his teammates. He was fined by Swedish authorities for defamation and invasion of privacy. He admitted what he did was a “stupid and egotistical act”, that he showed a lack of judgment and had caused harm to the woman and her family.

Though Mailloux said he didn’t want to be selected in this year’s draft, he’s accepted the possibility of joining the Montreal Canadiens because he believes the organization will help him improve as a person and a player. He also said he’s participating in professional counseling.

Taking questions from reporters, Mailloux acknowledged he had work to do to regain the public’s trust. He also indicated he’d had no contact with the Canadiens from the time he renounced himself from the draft on Tuesday to when he was selected on Friday.

SPECTOR’S NOTE: Mailloux broke the law but he should have an opportunity to redeem himself as a person. As The Athletic’s Arpon Basu observed, he needs the time to get his house in order by making the self-improvements he claims he’s committed to doing and make amends to his victim’s satisfaction, not just his own. She claims all she wants from him is a heartfelt apology that she said she hasn’t received from him yet. That would be the best place to start.

The Canadiens haven’t done Mailloux any favors by selecting him just three days after renouncing himself from the draft. The same would apply for any of the rumored teams that intended to choose him in the second round had the Canadiens not taken him. It also applies to the NHL and NHLPA for not having a rule in place that honors a player’s request not to be part of a given draft.

Regardless of whatever round Mailloux might’ve been chosen in this year’s draft, this only makes his situation more difficult. As Basu also pointed out, it’s hard to see how this will put him in a position to improve as a person or a player.

← Notable Trades and Contract Signings – July 24, 2021 Sunday NHL Rumor Roundup - July 25, 2021 →
We use cookies on our website to give you the most relevant experience by remembering your preferences and repeat visits. By clicking “Accept”, you consent to the use of ALL the cookies.
Do not sell my personal information.
Cookie SettingsAccept
Manage consent