NHL.COM: The Montreal Canadiens staved off elimination from the Stanley Cup Final with a 3-2 victory over the Tampa Bay Lightning in Game 4 on Monday night. 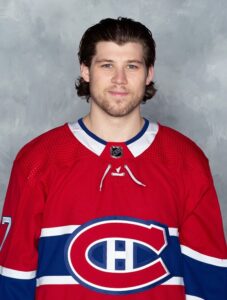 Josh Anderson opened the scoring in the first period and tallied the game-winner in overtime. Alexander Romanov scored his first of the playoffs for the Canadiens while Carey Price made 32 saves for the win. Barclay Goodrow and Pat Maroon replied for the Lightning.

The series returns to Tampa Bay for Game 5 on Wednesday night with the Lightning holding a 3-1 lead.

TSN: The Canadiens made some lineup changes for Game 4. Jesperi Kotkaniemi was replaced by Jake Evans as their third-line center while Romanov and Brett Kulak replaced Erik Gustafsson and Jon Merrill on their third defense pairing. Anderson moved to the Canadiens’ second line alongside Nick Suzuki and Cole Caufield.

Lightning winger Alex Killorn missed his third straight game of this series. He remains day-to-day with a leg injury suffered in Game 1.

SPECTOR’S NOTE: The Lightning controlled most of the play in this game. Head coach Jon Cooper lamented several near misses for his club, including several shots clanging off the goalposts.

That doesn’t detract from what was a big win by the Canadiens. Price and his penalty killers were outstanding as they shut down five Lightning power-play opportunities, including a double-minor on Habs captain Shea Weber that stretched from late in the third period into the early minutes of overtime. Price was particularly strong during the opening minutes of the game, shutting down the Lightning as they pushed to open the scoring.

NHL.COM: Columbus Blue Jackets goaltender Matiss Kivlenieks died on July 4 at age 24. It was initially reported that he suffered an apparent head injury during a fall, but an initial autopsy revealed he suffered a percussive injury from a fireworks explosion that led to major damage to his heart and lungs.

The incident took place at the Novi, Michigan home of former Detroit Red Wings goalie Manny Legace. Kivlenieks’ death is being investigated as accidental and no charges are under consideration at this time.

THE COLUMBUS DISPATCH: Blue Jackets fans gathered at a popular bar near NationWide Arena to mourn Kivlenieks’ passing. It included an 80-second moment of silence in honor of the netminder, who wore No. 80 with the Jackets.

SPECTOR’S NOTE: My sincere condolences to Kivlenieks’ family, friends, teammates and the Jackets organization and fans. This was a tragic ending to a young life and career that held so much promise.

TWINCITIES.COM: The Minnesota Wild signed Nick Bjugstad to a one-year, $900K contract. The 28-year-old center was slated to become an unrestricted free agent on July 28. He excelled in a depth role with the Wild this season.

SPECTOR’S NOTE: Bjugstad’s taking a big pay cut to stay in Minnesota. Cap Friendly indicates he was coming off a six-year deal worth an annual average value of $4.1 million. That reflects how much his role has changed since signing that deal with the Florida Panthers in 2014.

The signing puts only a slight dent into the Wild’s projected salary-cap space for next season. They have over $15.9 million remaining with restricted free agent stars Kirill Kaprizov and Kevin Fiala to re-sign.

SPECTOR’S NOTE: Eklund overcame an emergency appendectomy and a positive COVID-19 test to become this year’s top European skater as ranked by NHL Central Scouting. He’s projected to go in the top five of this year’s NHL Draft.

THE BOSTON GLOBE: The AHL’s Providence Bruins will be seeking a new head coach as Jay Leach has joined the NHL’s Seattle Kraken as an assistant coach.

← NHL Rumor Mill - July 5, 2021 NHL Rumor Mill - July 6, 2021 →
We use cookies on our website to give you the most relevant experience by remembering your preferences and repeat visits. By clicking “Accept”, you consent to the use of ALL the cookies.
Do not sell my personal information.
Cookie SettingsAccept
Manage consent