THE ATHLETIC: Twenty years after the September 11, 2001 attacks on New York and Washington, the hockey world remembers Los Angeles Kings scouts Garnet “Ace” Bailey and Mark Bavis, who perished aboard highjacked United Airlines Flight 175 when it was deliberately crashed into the South Tower of the World Trade Center in New York City. 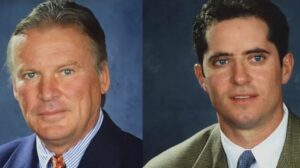 Wayne Gretzky shared his memories of Bailey, who mentored The Great One early in his pro career and became his close friend. Mike Bavis recalled identical twin brother Mark’s path to becoming a scout.

Former NHL coach Bruce Boudreau talked about how would’ve been on the same flight with Bailey and Bavis if he hadn’t flown to Los Angeles a day earlier to attend a dinner of all the coaches in the Kings’ organization. At the time, Boudreau was the head coach of the Manchester Monarchs, an AHL affiliate of the Kings.

SPECTOR’S NOTE: Please spare a thought for the families and friends of Bailey, Bavis, and the other innocent people who perished during the attacks on that terrible day and for the survivors, many of whom still bear the physical and mental scars.

NEWSDAY: The worst-kept secret of the offseason was officially confirmed yesterday as the New York Islanders announced Zach Parise had signed a one-year contract. Financial terms for the former Minnesota Wild winger were not disclosed.

SPECTOR’S NOTE: Parise recently confirmed he’d signed with the Isles earlier in the season and would soon be on his way to Long Island for training camp.

SPECTOR’S NOTE: Gudbranson’s critics believe his style of play no longer fits into today’s fast-paced game. Nevertheless, he keeps finding teams willing to pay for his leadership and physical shutdown game. The Flames are the well-traveled blueliner’s seventh NHL team.

THE ATHLETIC’s Michael Russo tweeted former Minnesota Wild captain Mikko Koivu will be joining the club’s prospect camp and training camp. It’s believed he’ll eventually have a position within the organization. Koivu announced his retirement in February after 16 NHL seasons.

SPECTOR’S NOTE: Cap Friendly shows Kesler under contract with the Anaheim Ducks this season. However, he’s all but retired after being sidelined by a hip injury. This announcement indicates Kesler is taking the first step toward what could be a coaching career in the pro ranks.

SPORTSNET: The Ottawa Senators announced a proof of vaccination and mask-wearing will be required for fans attending their home games this season.